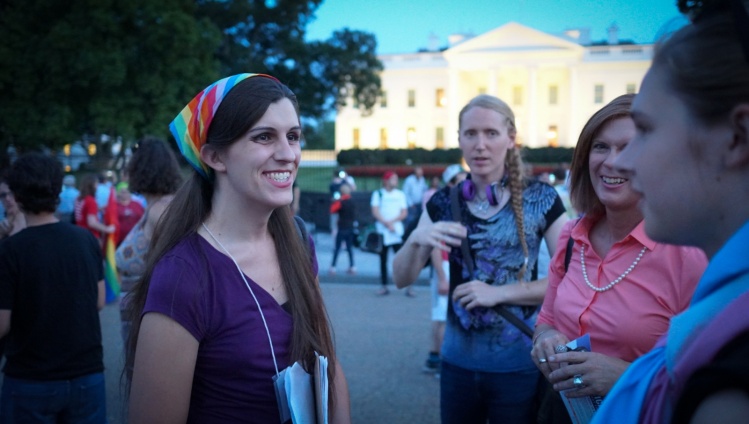 Danica Roem, the first openly transgender person elected to a statehouse at a protest in July (Photo: Ted Eytan)

Sometimes, the Democratic Party amazes me. And not in a good way.

Here is a party fresh off a series of big election triumphs all over the country. The nation faces an unprecedented challenge brought on by President Trump’s breathtaking irresponsibility. Republicans are pushing through the most reactionary tax bill since the 1920s.

And what do leading Washington Democrats want to do? They would have us engage in the “move left” vs. “move to the center” squabbles that have obsessed the party for at least three decades. Old arguments feel comfortable but they’re inadequate for the moment. And new research is finding that this bickering does not match the mood of local anti-Trump activists.

Ever since Trump’s surprise victory, the distinguished Harvard University scholar Theda Skocpol has been spending a lot of time in Wisconsin, Pennsylvania, North Carolina and Ohio with her colleagues Mary Waters and Kathy Swartz. They are talking to leaders and rank-and-file citizens in two counties in each state to track changes in our politics wrought by the 2016 outcome.

All the counties they are studying voted for Trump, yet in every one of them, new anti-Trump organizations have risen up. The researchers have found ten such groups so far. (By the way, all these groups are led or co-led by women, many of whom are also deeply involved in their local churches.)

What’s struck Skocpol is how irrelevant the Democrats’ tired quarrels are to these freshly engaged citizens. “At the grass roots, people are dealing with the crisis Trump’s presidency presents to America, and they’re not refighting the election of 2016,” she said in an interview. “They’re not talking about whether the Democratic Party should be more progressive or more centrist.”

In fact, she finds that “both Bernie [Sanders] and Hillary [Clinton] supporters are involved,“ which shows how “you can have energetic citizen action that doesn’t have to sort out national labels.“

This activism, as Skocpol sees it, is motivated by a simple but powerful civic sense that Trump is violating basic norms and principles of American life. The troops on the ground don’t need programs or litmus tests imposed from on high, she adds. They need practical support and the freedom to act as they see fit in their own areas.

A lot of this left/center business is about abstractions imposed on reality rather than a reflection of it.
sharetweet

This was also the lesson of this month’s elections, which saw victories by Democrats across the party’s spectrum of opinion. In Virginia, Gov.-elect Ralph Northam ran a moderate statewide campaign, while down-ticket winners in legislative races included a member of Democratic Socialists of America as well as the first openly transgender person elected to a statehouse. Voters in Virginia (and New Jersey and elsewhere) said to Washington Democrats: Stop it with your stupid fights. We have work to do.

Of course, Democrats will have serious debates as time goes on over issues from health care and economics to trade and education. Such discussions are both healthy and necessary, as long as they don’t involve promiscuously applied ideological purity tests.

And, yes, the party is more progressive on certain questions than it used to be. It is rightly more committed, for example, to LGBTQ rights—but so is the country as a whole. There has been a strong response from Democrats of all races to police shootings of young, unarmed black men. But this is less a move to the “left“ than an expression of simple decency. A lot of this left/center business is about abstractions imposed on reality rather than a reflection of it.

The combatants in the intra-party arguments might usefully start by acknowledging the merits of some of the insights their opponents offer. Jared Leopold, the communications director of the Democratic Governors Association, said that Northam’s approach resonated with Virginia voters who “were looking for a calm and strong leader in the midst of chaos in Washington.” Moderates have a point when they say that voters nationally are similarly seeking steady and reliable leadership.

But progressives, in turn, are right to argue for clear, compelling and comprehensible policies to deal with the economic inequalities that are hurting many in the ranks of Clinton and Trump voters alike. Bold, not bland, is the way to go.

For now, the imperative is to check Trump’s abuses and to stop the truly radical agenda that Republicans are advancing, including their continuing efforts to wreck Obamacare and an unpopular, budget-busting corporate tax cut that redistributes large sums of money to society’s wealthiest.

The grass-roots activists know how important these battles are. The ideological infighters should learn from them.

An Electoral Dry Run Down Under