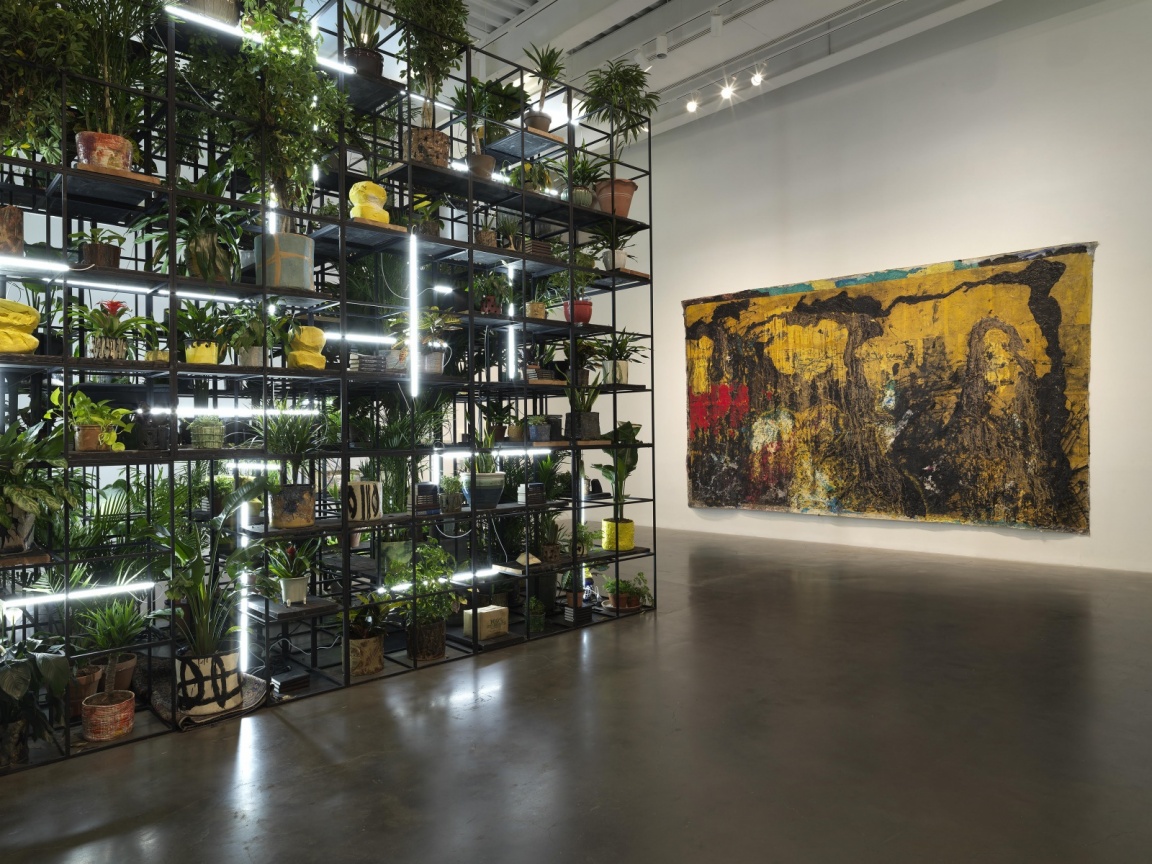 ‘Grief and Grievance: Art and Mourning in America’
By Clifford Thompson
Arts
Race

The word “mourning” makes one think of a funeral. That is often followed by a repast, where people brought together in sadness share memories and experiences, find solace in company, and discover—or reaffirm—commonalities. The new exhibit Grief and Grievance: Art and Mourning in America, on view at the New Museum in New York City through June 6, can be thought of as an artistic repast. The thirty-seven Black artists whose works are represented here range widely in age and choice of medium—from painting to photography to video to audio to installation. Even so, their works are in conversation with one another, forming sly and surprising connections.

The guiding force behind Grief and Grievance was the influential Nigerian curator, art critic, and educator Okwui Enwezor. Before his death at the age of fifty-five in 2019, Enwezor conceived of the show as a means of addressing “the concept of mourning, commemoration, and loss as a direct response to the national emergency of black grief.” The New Museum’s own description goes a step further. According to its website, the exhibition addresses “the national emergency of racist violence experienced by Black communities across America.”

Grief and Grievance occupies four floors of the museum. In such cases, it’s usually best to start at the top and work one’s way down; here, that means beginning in a room dominated by Rashid Johnson’s 2016 work Antoine’s Organ. Roughly sixteen feet high, twenty-eight feet long, and ten feet wide, the work is made of black steel with nine tiers and vertical bars. The tiers are crowded with potted plants—not just symbols of life, but actual life. Here and there we also find glow lights, video monitors playing some of Johnson’s previous works, and copies of well-known books by Black authors. We can read it as a trenchant comment on a nation characterized by mass incarceration: symbols of a thriving culture contained within a structure that recalls a cell block.

Mounted on the walls nearby is Mark Bradford’s Untitled (2020). Here, you might say, the conversation among the mourners begins. The three-dimensional grid of Johnson’s work finds a counterpart in Bradford’s, whose spark was a color-coded map that accompanied the McCone Report, a study commissioned by Gov. Pat Brown of California following the 1965 Watts Uprising. John McCone, a former CIA director, had identified unemployment and substandard schools as some of the underlying causes of the unrest; the map reduces areas of Watts to particular kinds of criminal activity and deterioration. Bradford’s work challenges—obliterates—such reduction. On this ten-foot-high, twenty-four-foot-wide canvas, red bleeds into yellow, yellow is streaked by tan and divided by rivers of black; shades of brown curve, flow, and interweave. There are shapes, too, almost resembling a forlorn face, a reaching arm—and nothing is simple, nothing fits into a premade box. 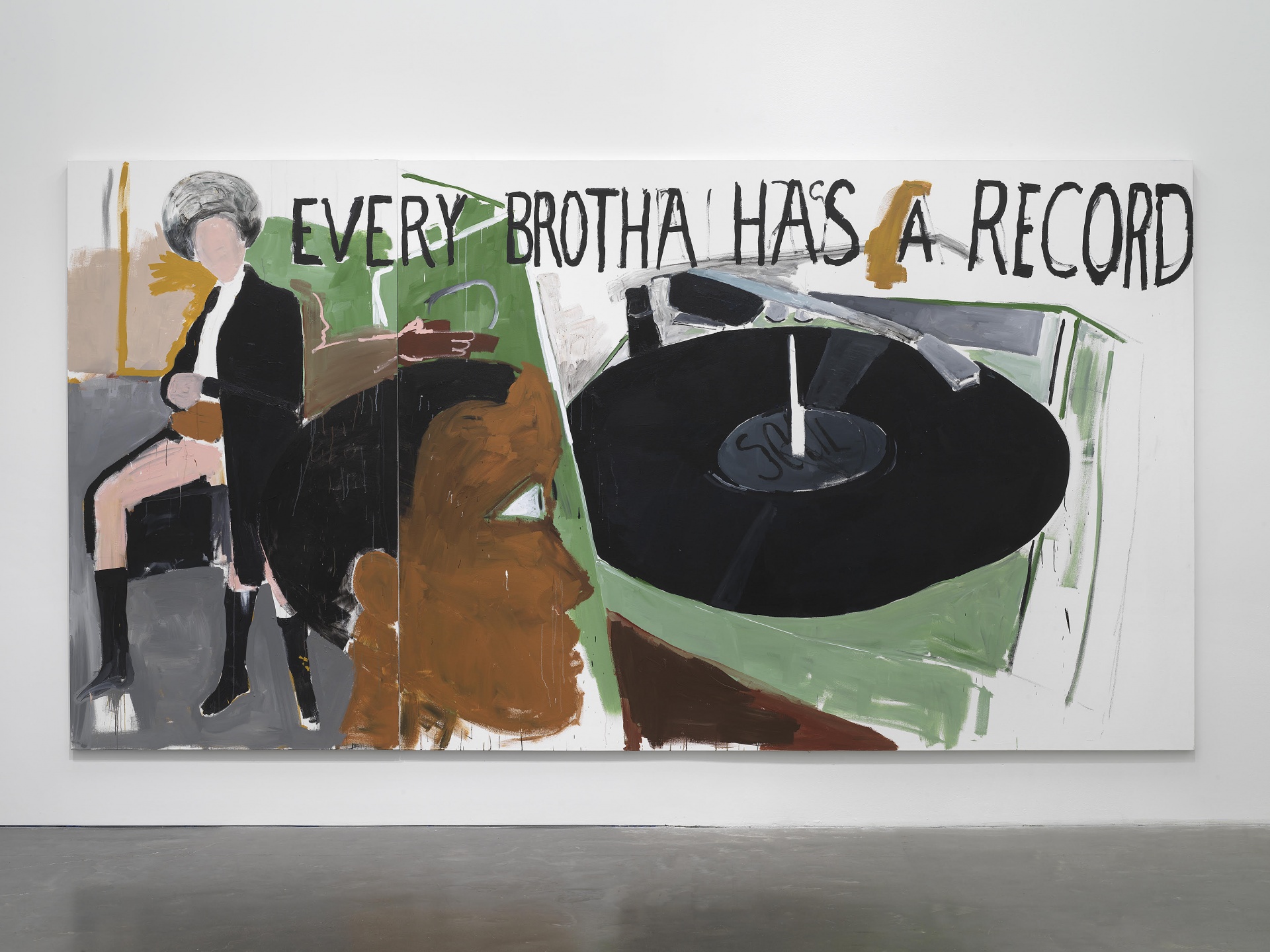 Just as Antoine’s Organ includes books by Black writers, Bradford’s Untitled echoes, almost eerily, Ralph Ellison’s famous essay “The World and the Jug.” That work began as a response to literary reductionism—specifically, to the critic Irving Howe’s suggestion, in his own 1963 essay “Black Boys and Native Sons,” that there were right and wrong ways for Black authors to write about African-American experience. Ellison accused Howe (and by extension others) of “tell[ing] us the meaning of Negro life” without having “bother[ed] to learn how varied it really is.” Referring to such presumptuous pronouncements, Ellison wrote, “Prefabricated Negroes are sketched on sheets of paper and superimposed upon the Negro community.” The response from Blacks, Ellison noted, is that “someone thrusts his head through the page and yells, ‘Watch out there, Jack, there’re people living under here.’” Bradford can be seen as one such figure—thrusting his head through the literal paper of McCone’s map to protest a simplistic view of Black life.

The grids in Johnson and Bradford’s works find echoes in the curved, intersecting lines of four paintings by Julie Mehretu, also on the same floor. Frequently taking images of violence or disaster—including the 2017 white-supremacist rally in Charlottesville, Virginia—as her starting points, Mehretu then adds layers of abstracted silkscreened images. In the process, she distorts the original images themselves to the point of abstraction. The emphasis, perhaps, falls as much on the artist’s feelings about the original incidents—feelings that include grief—as on the events themselves.

Downstairs, we hear further conversations among artist-mourners. Henry Taylor’s wall-dominating Every Brotha Has a Record, a painting whose title stretches across the top of the canvas, seems to participate in two exchanges at once. With the word “record,” as in “criminal record,” the painting chimes in with Johnson and Bradford’s works, while its visuals—which include a profile view of the head of a young Black man gazing in the direction of a turntable, where the LP label reads “Soul”—contribute to a conversation about music.

It’s an ongoing dance of decay, beauty, creativity, and pointless-seeming struggle: the very pattern that exists in many Black communities.
sharetweet

That conversation takes place all around. In Jennie C. Jones’s series of ten paintings, Scores for Sustained Blackness, black parallel lines—the kind found in sheet music—are set free. Arranged both vertically and horizontally, unburdened by specific notes, they evoke the concept of music—a signature African-American cultural contribution—to explore the concept of Blackness. Then there is Theaster Gates’s arrestingly strange 2014 video, Gone Are the Days of Shelter and Martyr. We see a man playing a cello; nearby, inside the ruins of a church, two men repeatedly raise heavy unhinged doors, then let them fall, noisily and amid much dust, to the floor. It’s an ongoing dance of decay, beauty, creativity, and pointless-seeming struggle: the very pattern that exists in many Black communities, which does not appear strange only because we are used to it.

Also contributing to the music conversation is one of four paintings by Kerry James Marshall. Using black, white, and gray acrylic, as well as collage and glitter, Souvenir IV (1998) depicts a tastefully decorated living room on a nine-by-thirteen-foot canvas. Hanging in space are the words “In Memory Of.” Below, a scroll lists the names of late Black musicians including Otis Redding, Booker Little, Sam Cooke, and Ida Cox. At the bottom of the work are the words “We Mourn Our Loss.” 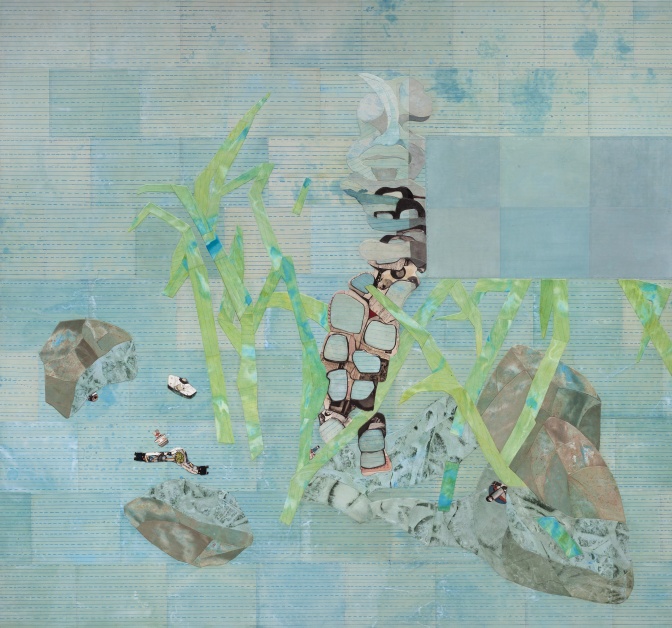 Still another conversation involves what has taken place in the sea. The four paintings in Ellen Gallagher’s Dew Breaker series (2015) were inspired by a concept of the Detroit electronic music duo Drexciya: an underwater world whose inhabitants are the unborn offspring of African women tossed from ships during the Middle Passage. Against lined, pale blue backgrounds—some recall elementary-school writing paper, thus evoking the tenderness of young lives—there are strange sea creatures that vaguely resemble humans, or vice versa, signaling the slave trade’s irrevocable transformation of an entire people. The creatures float amid what appears to be bits of human-made trash, which is the exact status imposed on marginalized people.

Nearby is Lorna Simpson’s Night Light (2019). Inspired by the African-American polar explorer Matthew Henson, it makes use of photographs from polar expeditions, first digitally enlarged and then transferred onto fiberglass. The resulting work features varying shades of blue, many of them dark, which evokes—among other associations—blues music. It also resembles the sea: at least one of its opaque, murky shapes distinctly looks like a fish. How have we gotten from the theme of mourning to a conversation about the sea? It is a testament to the wonder and unpredictability of human life, even under inhumane conditions. Watch out there, Jack, there’re people living under here!

The exhibit’s subtitle, “Mourning in America,” may or may not have been intended to allude to “Morning in America,” the slogan of President Ronald Reagan’s 1984 reelection campaign. In either case, there is a connection to be made, as well as a rather grim joke. “Morning in America” was meant to put forward the idea that, under Reagan, the country had returned to a sense of optimism and possibility. “Morning” suggests “beginning,” and of course the beginning of America included slavery maintained by violence against Blacks. By kicking off his 1980 presidential campaign outside Philadelphia, Mississippi, the scene of the 1964 arrest and subsequent murders of three civil-rights workers, Reagan appeared to be evoking this legacy of hate.

“Mourning in America” both acknowledges and defies that sentiment. The exhibit’s contributors may be mourning, but they are mourning in America. These Black folks, these artists—who also include such heavy hitters as Kara Walker, Simone Leigh, Jack Whitten, Glenn Ligon, and others—are here to stay. Don’t you forget it.

Published in the May 2021 issue:
View Contents
Tags
Arts
Race