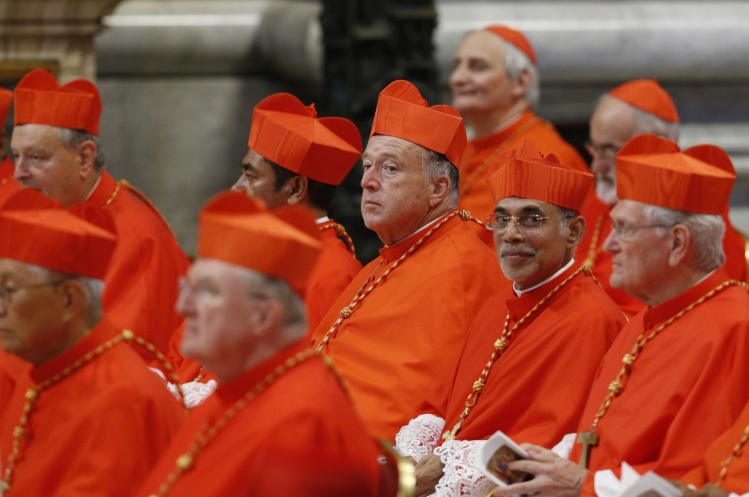 ROME – August is really no time to be in the Eternal City. With temperatures in the upper nineties and the Mediterranean sun scorching the cobblestones for more than thirteen hours a day, most Italians have the good sense to simply stay away until September. Pope Francis, however, has other considerations. On August 27, during the weekend when most Romans are enjoying a gran finale at the beach or in the Alps somewhere, the pontiff instead held a consistory in St. Peter’s Basilica for the creation of twenty new cardinals, including San Diego’s bishop, Robert McElroy. What’s more, on August 29 and 30, Francis is hosting meetings with nearly two hundred of the world’s cardinals, for discussions about his recent reorganization of the Vatican’s central bureaucracy. It’s the first time he has convoked the entire College of Cardinals since 2015.

This rare event comes as the pope has been seen using a wheelchair in recent months because of persistent knee pain, and there is speculation in some quarters—especially quarters unhappy with Francis’s nearly ten-year papacy—that he is setting up a sort of “end game” for his time as bishop of Rome: call the cardinals to Rome, add some preferred voices to their ranks, and prepare the stage for the election of the next guy. But Francis doesn’t appear to have anything like that in mind. Instead, he seems to be encouraging a style of dialogical leadership, in the mold of his unprecedented, two-year global process for the upcoming Synod of Bishops, which will culminate in a month-long meeting in Rome in October 2023.

Cardinal Michael Czerny, the Canadian head of the Vatican’s peace and justice office, had a one-word answer when asked in a recent phone interview what he is expecting from the next months of Francis’s papacy: “synod.” “The synod, in a truly inspiring way, is the carry-out, is the follow-through, is the huge next step in the whole papacy,” said Czerny, who is also the prefect of the Dicastery for Promoting Integral Human Development.

For his part, McElroy said on August 26 that he believes the objective of the synodal process “is to change the culture of the Church in a lasting way.” “That would be my overarching belief in what is truly important in what is going on in the life of the Church in this moment,” McElroy said in an interview at the Pontifical North American College, the day before he was formally made a cardinal by Francis.

McElroy said the outcome of the process, which has already involved hundreds of thousands of consultation meetings globally at the diocesan level, “is not pre-determined.”

“We don’t know exactly where this is going to lead us,” said McElroy. “We just know that being the type of Church we’re called to be in synodality leads us to be a more Gospel-oriented, more Christ-oriented Church.”

“There will be surprises, not just from this pope, but from where God leads us all in this process,” he said.

The formal agenda of the unusual meeting this week among the cardinals and pope is to discuss Praedicate evangelium, the apostolic constitution Francis signed in March to reorganize the Roman Curia. One major innovation of that document is its declaration that “any member of the faithful”—including laypeople—can lead a Vatican office. It also makes clear that evangelization is the key goal of the whole Vatican structure. In its listing of the Vatican’s sixteen primary offices, known as “dicasteries,” first on the list is the newly constructed Dicastery for Evangelization, not the once seemingly all-powerful Dicastery for the Doctrine of the Faith.

“There will be surprises, not just from this pope, but from where God leads us all in this process.”
sharetweet

Although the constitution, and this week’s meeting, do not formally deal with the synod process, both Czerny and McElroy described the intention of the gathering in ways that mirror how Francis has spoken about the synod. Priority is given to bringing together a diverse set of voices, listening to what everyone has to say, and adapting to the realities experienced by the Church on the ground in various places around the globe.

Czerny described a two-part process: hearing from the global cardinals about their hopes for the Vatican reforms, but also helping them think through how they might echo those reforms back home. “While Praedicate evangelium is primarily directed to the reform of the Roman Curia, it’s not exclusively so,” said Czerny. “There’s a very strong ‘knock-on effect.’ In other words, somebody who comes from an archdiocese somewhere and sees how the Curia is expected to be reformed and is reforming, what lessons are there for him? What light does that shed on how you run an archdiocesan Curia or a diocesan Curia or a bishops’ conference?”

McElroy summarized the major goal of the new apostolic constitution as trying to stress the “missionary identity” of the entire global Church. He said he sees the “primary opportunity” for the Rome meeting as the “integration of the principles of the document into the wider life of the Church.” “The meetings with the cardinals…will be the act of integrating this new orientation, or this thrust of missionary discipleship, into the very workings of relationship between the Curia and the local dioceses and churches,” he told me. “That’s not something that can be designed or decided here in Rome alone. That’s something that has to be collaborative…and it seems to me this could be a fruitful beginning of co-participation on the integration of those principles.”

The group meeting with Francis on August 29 and 30 will be one of the most diverse ever convoked at the Vatican. The pope has made a priority of appointing cardinals from far-off places, including those that have never before had representation in the College of Cardinals. Among those Francis has just made cardinals is Archbishop Anthony Poola of Hyderabad, India—a member of the Dalit community (formerly known as the “untouchables” within the Hindu caste system)—and apostolic prefect Giorgio Marengo, who leads the Catholic Church’s presence in Mongolia, representing about a thousand Catholics in a country of some 3.3 million. Also included was South Korean Archbishop Lazarus You Heung-sik, the new head of the Vatican’s clergy office, and Virgílio Do Carmo Da Silva, the archbishop of Dili, East Timor.

Of course, there is still one major group that won’t be represented in the meeting: women. Paola Lazzarini, president of the group Donne per la Chiesa (“Women for the Church”), which seeks better inclusion for women in Church leadership, said in an interview that she is not “particularly impressed” with the purpose of the gathering. “From my point of view, it is rather disappointing that the reform of the Curia would be discussed only among cardinals, especially when the reform has as among its novelties the opening up of positions of responsibility to laymen and laywomen,” Lazzarini told me. “At the moment it is really difficult to understand if a significant change is taking place.”

Lucetta Scaraffia, the former editor of Donne Chiesa Mondo (“Women Church World”), a monthly women’s magazine insert in the Vatican’s L’Osservatore Romano newspaper, said that she, too, was disappointed. She said that while it is a “good thing” that the pope’s reform opens up the possibility of appointing women to positions of leadership at the Vatican, she suspects any women who are chosen will be selected “for their known obedience” toward male hierarchs.

Czerny praised the pope for appointing cardinals from a variety of places around the world, and said Francis wants “to reflect the real Church as it really is.” But Czerny also acknowledged that “there are many other aspects of the Church that don’t get reflected in the naming of cardinals, beginning with the women members of the Church.”

When I asked McElroy about the lack of women in the room for the meeting among the cardinals and pope, he pointed to the effect that the 2021–23 synod process is already having on the Church. The San Diego prelate, who has publicly indicated he is in favor of ordaining women as deacons, said he has read about a dozen of the synod reports released by various dioceses in the United States, from a range of places. “What was said was more or less the same in every place,” McElroy told me. “One of the major themes was inclusion. LGBT inclusion, and, very predominantly, the inclusion of women. I think the synodal moment hopefully will be one in which we wrestle with that in much greater depth. I think that will have to be an outcome of this process.”

Joshua J. McElwee is the news editor of the National Catholic Reporter. He was formerly that publication’s Rome-based Vatican correspondent from 2014 to 2021.