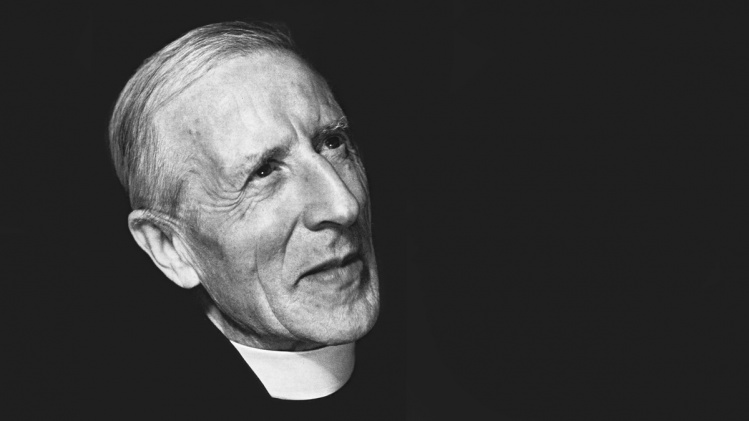 I was eighteen when I first encountered the work of Pierre Teilhard de Chardin. It was the second week of my third semester at Georgetown University, and I was assigned Teilhard’s “Mass on the World” for a theology class taught by the late Thomas King, SJ. I was instantly captivated. King was one of the world’s preeminent Teilhard scholars, and quickly became my spiritual director, pastor, and mentor until his death in 2009. My appreciation for Teilhard flourished after my undergraduate years, surviving my time as a military officer, high-school teacher, and youth minister before I began graduate theological studies. Master’s and doctoral work helped me understand that appreciating any scholar requires grappling with ambiguities and flaws in his or her thought, and the further my studies progressed, the more I became aware of such ambiguities and flaws within Teilhard’s work.

I have written about some of this in a blog post for Religion Dispatches titled “Pierre Teilhard de Chardin’s Legacy of Eugenics and Racism Can’t Be Ignored,” as well as in a longer article published in the academic journal Philosophy and Theology. Last month John Haught responded to my critique of Teilhard in these pages (“Trashing Teilhard,” February 8). I am grateful to Haught for his response, since scholarly debate over this dimension of Teilhard’s legacy is precisely what I had hoped my essay would provoke. I am disappointed, however, at Haught’s unwillingness to address the specific points I have made and his apparent eagerness to preempt further debate.

Haught claims that “seasoned Teilhard scholars are aware of the questionable remarks” to which I drew attention. My extensive research on precisely this question indicates that this is not true. Only a 2013 book by the Jesuit John Cowburn (Pierre Teilhard de Chardin: A Selective Summary of His Life) and an unpublished 2000 dissertation by Amy Limpitlaw (“The Kingdom of God as a Unity of Persons: Pierre Teilhard de Chardin’s Organic Model and John MacMurray’s Form of the Personal”) mention Teilhard’s connections to eugenics, and contrary to Haught’s claims, both works highlight the troubling nature of Teilhard’s views on the subject.

Christian theology demands, in its beautiful paradox, that we find holiness not in the strength but in the suffering of the world.
sharetweet

Haught claims that Teilhard’s connections to eugenics were “speculative,” “not declarative,” and ultimately peripheral to the core principles of his philosophical system. Let me offer just two examples to refute this claim. First, in 1951, Teilhard petitioned UNESCO to change its famous proclamation “The Equality of the Races.” In his letter, Teilhard argued against “the scientific uselessness as well as the practical danger” of this document, noting that “it’s not a question of ‘equality,’ but of ‘complementarity in convergence’…which does not exclude the momentary prominence of certain of its branches over others.” Such a public argument points to a deeply held and seriously considered belief in inequality among humans.

The second example is a 1953 letter in which Teilhard argues that the church should establish an official commission on eugenics:

Why is it that in Rome, along with a ‘Biblical Commission’ there is no ‘Scientific Commission’ charged with pointing out to authorities the points on which one can be sure Humanity will take a stand tomorrow—points, I repeat, such as: 1) the question of eugenics (aimed at the optimum rather than the maximum in reproduction, and joined to a gradual separation of sexuality from reproduction); and 2) the absolute right (which must, of course, be regulated in its ‘timing’ and in its conditions!) to try everything right to the end—even in the matter of human biology.

While Teilhard had good reason to distrust the Vatican, he also knew what such disagreement could mean. The fact that he expressed these thoughts with clarity, in writing, is evidence enough of his commitment to these opinions. Haught claims that Teilhard’s insistence (in several places, including the 1953 letter) that we must “try everything” was always made “within the constraints of a responsible moral vision rooted in Christian hope.” However, Haught fails to provide a clear explanation of the content of this “responsible moral vision.” While some passages suggest Teilhard’s desire for the unity that Haught describes, others suggest that Teilhard preferred that some humans be discarded in order for others to thrive. In her dissertation, Limpitlaw addresses this troubling duality after assessing many quotations: “[Teilhard’s] vision too easily shifts from a vision in which all contribute (however unequally), to one in which some are simply cast off. Complementarity gives way to a simple survival of the fittest and a destruction of the weak.” More research and analysis are needed in order to define Teilhard’s moral vision, especially at a time when liberation theology compels us to consider the needs of the oppressed, outcast, and differently abled over the needs of the strong.

Haught claims that Teilhard is “putting forth questions rather than declarations,” citing part of a passage I use in my work. But the full passage in question negates his claim. It begins:

In the matter of “incorporated” energy we are incredibly slow to achieve (or even to conceive) the realization of a “body” of humanity. In this field the apostles of birth control (although too often inspired by the narrow desire of relieving individual hardships) will have rendered us the service of opening our eyes to the anomaly of a society that concerns itself with everything except the recruitment of its own elements. Now eugenics does not confine itself to a simple control of births. All sorts of related questions, scarcely yet raised despite their urgency, are attached to it.

Haught cites only the next part of the passage:

What fundamental attitude, for example, should the advancing wing of humanity take to fixed or definitely unprogressive ethnical groups? The earth is a closed and limited surface. To what extent should it tolerate, racially or nationally, areas of lesser activity? More generally still, how should we judge the efforts we lavish in all kinds of hospitals on saving what is so often no more than one of life’s rejects?... To what extent should not the development of the strong...take precedence over the preservation of the weak?

Given the declarative statements that precede these questions, it seems clear that they are rhetorical: the reader can infer the drift of the answers Teilhard has in mind.

Haught claims that Teilhard’s arguments for inequality are acceptable within a broader vision of a “differentiating union” of all peoples. But what kind of union? Early twentieth-century America saw a “separate but equal” differentiation that was anything but unified despite the claims of Plessy v. Ferguson. Apartheid laws in South Africa similarly claimed equality and unity through differentiation of ethnic groups. Given these and many other troubling examples of “differentiated unions” in the modern world, and given Teilhard’s support of an unequal hierarchy of ethnic groups, further investigation of Teilhard’s vision of unity is in order, as well as some skepticism about the unity part.

Haught is correct when he claims that Teilhard’s ties to eugenics do not make him unique either among theologians or among thinkers of his generation. One can easily find rebarbative passages in Augustine, Aquinas, or Luther, and theories of racial difference and the accompanying philosophical arguments of eugenics were indeed dominant scientific views in the early twentieth century. Nor should it be forgotten that Teilhard was one of the many victims of unjust censorship by the Catholic Church over views on evolution; he was not allowed to publish any theological essays between 1923 and his death in 1955. Perhaps, if he had not been censured, he would have changed his views on human equality through dialogue with other theologians, especially those who rejected eugenics despite its scientific and philosophical popularity at the time. Nevertheless, it is hard to deny that Teilhard’s clear and consistent support of eugenics-related philosophies can be tied to core principles of his mature thought, especially his arguments combining physical and spiritual evolutionary development.

I do think there is a way forward for Teilhardian research, in addition to further investigation of his ties to eugenics. I would welcome a renewed focus on Teilhard’s early mystical writings. But his support of eugenics and the related doctrine of human inequality force us to reject or readjust some interpretations of his ideas. It would be irresponsible to ignore even a tangential connection between Teilhard’s arguments and eugenics, especially at a time when CRISPR technology and widespread DNA sequencing have revived eugenics-related conversations.

Christian theology demands, in its beautiful paradox, that we find holiness not in the strength but in the suffering of the world, and that the path to God is found by prioritizing the broken, the poor, the outcast, the marginalized, and the oppressed. I firmly believe there is a place for Teilhard in the Christian theological tradition, but there is absolutely no room for eugenics.