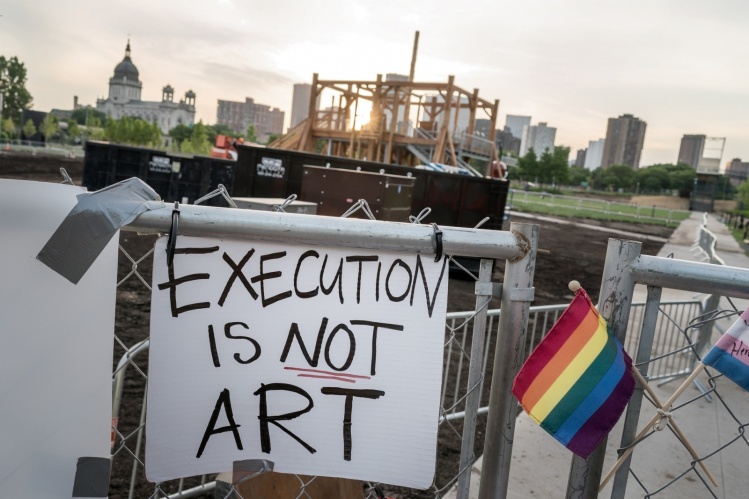 As museum directors review 2017, most of them would hope that their institutions were noticed for the exhibitions they put on, the number of visitors who came to see those exhibits, the important objects that have entered the permanent collections, and the amount of money their museums brought in. But what will probably be remembered about this year in the art-museum world is not any particular exhibition but a question that kept coming to the fore: What should museums be permitted to do with the objects in their possession? Should they take them down if someone finds them offensive? Do specific identity groups “own” certain themes and subjects? There has been more talk about this issue—which is as much about politics as about art—than about anything else. There have been a number of high-profile disputes about what may be freely expressed in an art museum, and by whom. The response to these disputes on the part of museum directors has ranged from good to spineless.

Demonstrations and protests erupted at the Whitney Museum in New York City when a white artist’s work referencing the lynching of Emmett Till was included in this year’s Biennial—and then again when the Whitney announced a retrospective of the work of Jimmie Durham, an artist whose work references Native American imagery and who claims Cherokee heritage but cannot prove it. There were also protests at the Guggenheim Museum when it included an installation and two videos portraying animal cruelty in an exhibition of current Chinese art; at the Walker Art Center in Minneapolis when it installed an outdoor sculpture by a white artist decrying capital punishment; and at the Dr. Seuss Museum in Springfield, Massachusetts, when it installed a mural that included the image of a slant-eyed Chinese man in a coolie hat.

The Whitney refused to remove the painting of Emmett Till (“Open Casket,” by Dana Schulz) or to cancel the Jimmie Durham retrospective. (For a month or so, a number of African-American activists stood in front of “Open Casket” in order to block viewers from seeing it.) Fears that animal-rights activists would cause damage to the artwork or the museum or both caused the Guggenheim to remove the three offending pieces. Faced with the threat of a boycott, the Dr. Seuss Museum chose to paint out the offending Chinese figure, which had been part of the author’s first children’s book, And to Think that I Saw It on Mulberry Street, published in 1937. Sam Durant’s 2012 wood-and-metal “Scaffold” was removed from the Walker’s outdoor sculpture garden after members of the Dakota Native American tribe complained that it was a painful reminder of the largest mass execution in U.S. history, when thirty-eight Dakota Indians were hanged in 1862 in nearby Mankato. Durant’s sculpture was ritually buried by members of the tribe, with his approval. Olga Viso, executive director of the Walker Art Center, issued a statement apologizing for the museum’s insensitivity. “I regret the pain that this artwork has brought to the Dakota community and others,” she wrote—and quite soon thereafter.

Most museums know how to present controversial or provocative work, but they sometimes lack the courage to withstand public pressure
sharetweet

Durant, a political progressive, was caught off-guard by the protests against his work. The problem, as he told me, was that there had been “no information made available ahead of time to people in Minnesota about the work. Dakota people passing by recognized the Mankato gallows because they knew very well what that particular gallows looks like. Since they had no information about what was going on, why a sculpture that included the Mankato gallows was being built there they could only assume that it was a celebration of the Dakota massacre and of the genocide of Native American people.” A failure on the part of a museum’s communications department would not normally be grounds to remove and destroy a work of art, but in this case both the artist and the institution believed that placating an aggrieved minority group trumped the right of the larger public to view the installation.

Perhaps the largest number of “artworks” that have been covered over or removed around the country are not at museums at all but in city parks and around municipal buildings in the Old South. Public monuments to the Confederacy’s generals and political leaders mean different things to different people. Some southern whites say they view them as part of their cultural heritage, while African Americans see them as reminders of slavery and Jim Crow segregation, a legacy whose effects are still being felt.

The comparison of Civil War–era memorials to artworks in and around art museums such as “Open Casket” and “Scaffold,” however, is necessarily limited. First, many of the memorials have been on view for more than a century, a far longer time frame than objects included in special exhibitions. Their removal (usually to municipal storage facilities) does not require that they be destroyed, or even that the public never see them again. Municipalities can relocate them to historical museums, where they can be put in their proper context. In a museum, they can help tell the story of the South. As memorials in public places, they are bound to be viewed as an ever-present reminder, and celebration, of oppression. 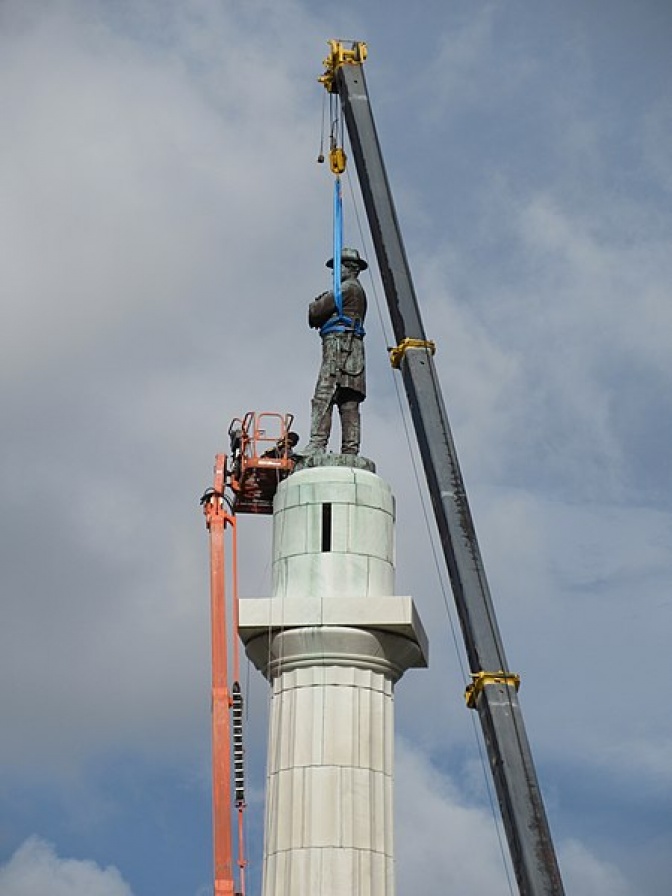 Such memorials are really more akin to advertising or illustration art than to fine art. One looks at them and remembers what they represent: the valor of General So-and-So; the courage of these soldiers; a civilization gone with the wind. At most, memorials reveal an artist’s technical skills. With fine art (and we refer to art in open spaces nowadays as “public art” instead of memorials), we are more attentive to the artist’s point of view and interpretation, as well as how he expresses them. Such art is meant to do more than help us remember; it helps us see. Where memorials are intended to honor, public art is intended to reveal.

But back to art museums. The largest question is what should museum directors do with art that may offend some visitors. Free expression certainly does not mean the freedom to shock and offend. Most museum officials already know how to present controversial or provocative work, but they sometimes lack the courage to withstand pressure from the public or the press. One option, often used with displays that are not suitable for children, is to put up signs that warn visitors of potentially disturbing artwork, or to make more controversial pieces less accessible. As an example, Valencia Community College in Orlando, Florida, once kept its gallery locked during an AIDS-related exhibition of photographs of nude men, and allowed visitors to enter only when accompanied by a docent. Another option, which one often sees at university museums and galleries, is to have more than one exhibition space for artwork, perhaps one gallery devoted to avant-garde work, and another devoted to “safe” work that is less likely to offend the general public. (The University of Massachusetts at Amherst has six separate art spaces scattered around its campus.) A third option is to hold pre-opening talks by the museum’s director or the curator of an exhibition, and provide wall text or brochures or videos that provide adequate background information for the objects on display. This gives museums a chance to explain their criteria: “You may not like this artwork, but we thought it an important piece to include in this exhibition, and here are the reasons for our decision.”

It is difficult to condemn an institution for wanting to insulate itself from unwanted controversy. In the age of sponsored exhibitions, public outrage can quickly become expensive. Admittedly, certain controversial subjects may need to be handled with tact and discretion, but even if they aren’t, the artists who create them have a right to express themselves. Some of the contemporary art that is worthy of public attention will inevitably offend someone, no matter how delicately it is presented. Museum officials, no less than the artists whose work they exhibit, need to show some courage in the face of political pressure that would reduce art to a message—and not always the message intended by the artist. If art museums don’t stand up for themselves, no one else will stand up for them.