How the Laity Can Help Reform the Church
By Massimo Faggioli
U.S. Catholicism
Sexual-abuse Crisis
Laity 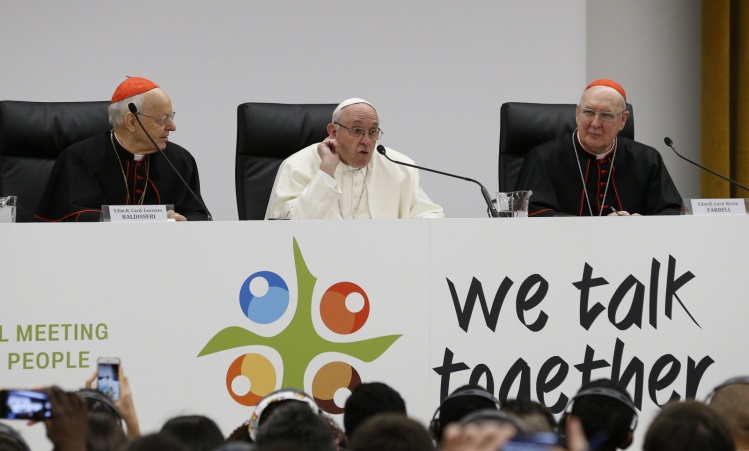 Pope Francis, Cardinal Lorenzo Baldisseri, secretary-general of the Synod of Bishops, and Cardinal Kevin Farrell, head of the Vatican's Dicastery for Laity, the Family and Life, as he speaks at a pre-synod gathering of youth delegates in Rome (CNS photo / Paul Haring)

Dietrich Bonhoeffer famously said that God granted American Christianity no Reformation. It’s also true that God granted America no Counter-Reformation. But with the latest phase of the abuse crisis in this country, that might be changing. The depth and magnitude of this crisis—as well as its distinctive combination of clerical corruption and theological division— make it worse than any crisis since the one that rocked the church five centuries ago. The current crisis may not lead to a formal division of the Church the way the Reformation did, but it could well lead to a long period of undeclared schism.

As in the sixteenth century, the question is not whether the Catholic Church will survive this age of scandal, but what form the church will survive in. The abuse crisis is clearly no longer just a scandal, or even a series of scandals. It is, at least in the United States, a revolution in the church that could lead either to reform, or to the moral and cultural marginalization of Catholicism. The question, then, is how best to reform the church, especially in the United States, which is the epicenter of this crisis. Some interpretations of the crisis, such as the idea that the whole hierarchy is corrupt to the root and must be totally replaced by the laity, have given force to ideas of the church that seem hardly compatible with Catholicism.

But those who have the power to stop the bleeding and initiate a process of true reform seem to be incapacitated. It is part of the ecclesiological culture of those who were promoted in the church under John Paul II and Benedict XVI to welcome spiritual renewal but not institutional reform. Right now, the hierarchical leadership of the church—both individual bishops and the U.S. Conference of Catholic Bishops—is in panic mode: almost every day new allegations weaken their authority. It is not clear what path forward they have in mind.

On the other side of the Atlantic, the Vatican is now dealing with what has become a global crisis, one that is sure to draw much attention at the bishops’ synod on youth, which opens on October 3. The day before meeting with the USCCB delegation, Francis announced an extraordinary meeting of the presidents of all bishops’ conferences at the Vatican, scheduled for late February. Not a consistory of cardinals nor a synod organized by the permanent secretariat of the bishops’ synod, this will be the first meeting of its kind, and it can be understood as Rome’s acknowledgment that the abuse crisis cannot be dealt with adequately unless Rome and local dioceses work together. We don’t yet know what will be on the agenda for this meeting. But we do know that Rome cannot wait to act. Nor can the church in the United States just wait to see what happens in Rome.

Leaving aside the huge problem of investigating the individual allegations in the Pennsylvania grand-jury report, and all the questions raised by the Viganò “testimony” about McCarrick, the long-term issue is about how to mend an ecclesial fabric that has been torn as never before. One can ask the Vatican to deal with bishops accused of cover-up and sexual harassment, but one cannot expect the Vatican to deal quickly with the larger ecclesial problem: how to cure the church in this country from corruption without killing it, or splitting it apart. At the moment, the patient appears too weak for surgery.

So, where to start? Let me offer a few proposals. First, let’s hit pause on reform agendas not related to the crisis at hand. The only agenda should be acting in favor of the victims and survivors of abuse, getting rid of corruption, and rebuilding the unity of the church. The rest can wait; in fact, I am afraid it must. The instrumentalization of the abuse crisis— turning it into leverage for one’s pet cause, no matter how remote that cause may be from the scandal—only makes the crisis deeper. Schismatic tendencies have arisen in the past few years because of the growing influence, in the church as in the world of politics, of influence and advocacy groups, lobbies, and think tanks. One could see the effects of this trend in the way Viganò’s “testimony” was crafted and disseminated. The problem is all the more complicated because it is not restricted to just one side of the ideological spectrum. It is much more visible on the conservative side, where there is usually more money involved, but both sides have become part of this vicious dynamic. In my opinion, the radicalization of reform proposals risks breaking the church in two at a moment when it is already particularly weak. (Full disclosure: I do not think that women’s diaconate or the ordination of viri probati—“proven married men”—to the priesthood are dangerously divisive reforms.) Sweeping demands for reforms inspired by understandable anti-clerical rage make it easier for representatives of the status quo (both clerical and lay) to close off all avenues of reform, and to insist that they alone are loyal to the church.

Second, the laity needs to make better use of ecclesial institutions that already exist and, wherever necessary, help create new ones. The way forward is not anti-institutionalism; that would help only those who already have access to the best extra-ecclesial institutions money can buy, and use these to influence the church. This is happening already.

Synodality is the best ecclesiological model for a church that wants to get out of this mess. Francis’s pontificate has offered opportunities for a synodal church, despite some clear limitations and blind spots, which one can also find in the document on synodality published a few months ago by the International Theological Commission (an English translation was published on September 28.) Institutions of synodality already exist (e.g., the presbyteral council, the college of consultors, chapters of canons, and the diocesan pastoral council), but they have been gutted in the decades since the Second Vatican Council created them. There are other institutions of synodality that still do not exist and must be created (e.g., national and diocesan committees representing lay Catholics, lay boards for the inquiries conducted for the appointment of bishops). Finally, there are institutions that were not built for synodality, but can provide a space for institutional reform in this extraordinary time, such as Catholic schools and universities. This moment of anti-clerical rage should not blind us to the importance of institutions: they can create space and freedom. In the long run, informality and spontaneity are not enough; they limit the possibilities of our relationships, which also require some kind of structure. As David Michael recently put it in a Commonweal article about Swedish weddings, “Formality creates spaces in which friends can tell their friends that they love them.”

As for creating new institutions of synodality, there is an obvious place to start. We have a conference of Catholic bishops. But we don’t have a conference of the Catholic laity. The Catholic laity have the right to request from the institutional church spaces and times for interaction and deliberation that belong to the whole church, not just the clergy. The abuse crisis has wiped away not just a great deal of trust in the church, but also false theological constructs of church power. Of the many related crises that the abuse scandal has revealed, there is a crisis of vicarial representation in the church. Clericalism has absorbed that representation, with the disastrous results now before us. False theological constructs of church power—and spiritualities based on them—are what have caused members of the hierarchy to gut existing institutions of representation over the past fifty years, and to refuse to consider the creation of institutions for lay representation in the global church.

For a long time the institutional church has pushed back against synodality and lay representation by opposing dogmatic legitimacy to democratic legitimacy, reminding us that the church owes its authority to its divine institution, not to popular consent. But the non-democratic foundation of power in the Catholic Church does not always exclude the use of formally democratic procedures. Pope Francis has opened the door to such procedures, but the bishops in the United States (and not only in the United States) do not seem interested.

This has to start somewhere. The paradox is that, in this moment of freefall for the Catholic hierarchy in this country, it is only the bishops who can create synodal moments for all the church—not just for those powerful donors with a fixed agenda. It is up to the bishops to arrange local diocesan synodal events—and this should happen before the February meeting of the presidents of the bishops’ conferences with the pope. The U.S. hierarchy should not allow powerful and rich Catholic foundations to take the lead in this. Partisan initiatives are only going to make the crisis worse. The only voices such initiatives amplify are the voices of those who are already very influential.

The reemergence of synodality is part of the church’s tragically late realization that it no longer has any territorial control (with bishops ruling over their dioceses as if they were fiefdoms), but must mobilize in order to reach out to the world. Such a mobilization requires the support and collaboration of all the faithful, not just the clergy. The abuse crisis has at least shaken the bishops’ complacency, which is a good thing.

Given the dramatic collapse of the hierarchy’s credibility, Catholics in this country have a few options: one is just to wait as the hierarchy consumes itself, bringing down the entire church with it, and then try to rebuild the U.S. church from scratch. (So much for continuity!) Another possibility is to flee into some small community of believers (aka, the Benedict Option). This would mean giving up not only on the secular world, but also on the rest of the church, including the victims and survivors of abuse. Yet another possibility is to let the agents of the status quo present themselves as reformers while they cynically use the abuse crisis to shut down real reform.

It would be better, I believe, to reclaim from the institutional church ecclesial spaces that belong to the people of God and not to the hierarchy. If the church leadership doesn’t clean up the sex-abuse mess, civil authority will. But the civil authority can only deal with the church’s crimes; it cannot restore the church. Only the faithful can do that—and the bishops must give them room to do it.