‘Life of Pi' & The Flat'
By Rand Richards Cooper
Movies 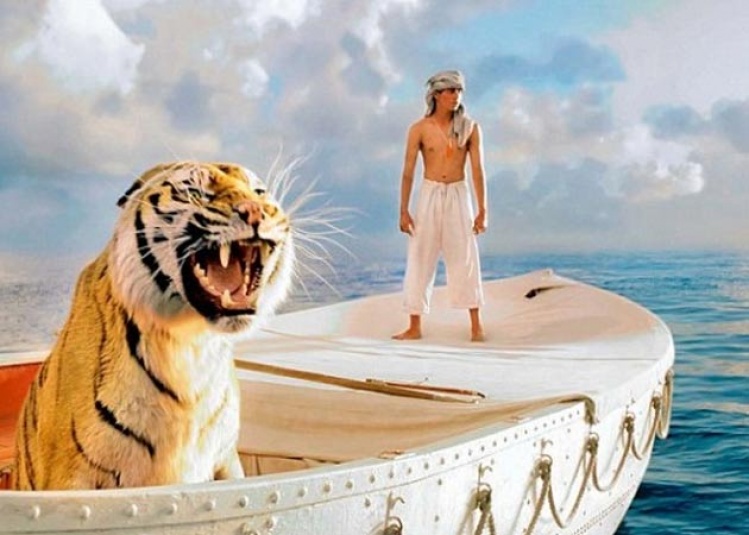 Often when the film adaptation of an acclaimed novel fails, it fails through excessive deference—a filmmaker overawed by the book and unable to reconceptualize it in a visual idiom. But things aren’t that simple with Life of Pi, Ang Lee’s screen version of the blockbuster Yann Martel novel chronicling the travails of a teenaged Indian boy who survives a shipwreck and seven months at sea. The novel itself was extraordinarily visual, conveying an explicit preoccupation with beauty and the natural world. It was the kind of book many dream of filming, but few dare. After all, how to make a movie two-thirds of which consists of a boy trapped in a boat with a Bengal tiger?

Thanks to the miracle of digital cinema, that tiger now exists, a creature of bristling magnificence and utterly believable ferocity, menacing the boy from the far end of a thirty-foot lifeboat. Claudio Miranda’s sumptuous camerawork, deepened artfully by computer-graphic wizardry, creates scenes of astonishing beauty, right from the start—like an image of swimmers in a surreally pellucid Parisian pool anticipating a later shot of the boy at sea, with fish of all size passing beneath his lifeboat. Savagely beautiful sunsets and limpid moonrises, the magic of phosphorescent fish making the sea glow, the sudden and sublime appearance of a whale: Life of Pi is a visual feast from start to finish.

The story takes a bildungsroman and turns it into Robinson Crusoe. In the first section we see Pi—his nickname, via a roundabout tale, is short for “Piscine,” French for “swimming pool”—growing up in Pondicherry, a part of South India colonized by the French, where his father owns a zoo. Pi (capably played as a child by Ayush Tandon, as a teen by Suraj Sharma, and as an adult by the genial Irrfan Khan) possesses a spiritual temperament—an instinct for reverence, a habit of wonder, and a stubborn resistance to the rationalist blandishments of his secular father. Life of Pi plays its young protagonist’s spiritual bent comically, having him embrace not just one or two, but all three of the subcontinent’s major religions, making him a Christian-baptized Hindu who practices Islam—or something like that. “Just find three more religions,” his father quips, “and you will spend your entire life on holiday!”

In fact, he is soon to spend what seems like a lifetime—a hellish one—adrift on the Pacific. Deciding to move the Patel family to Canada, Pi’s father books passage for them on a Japanese freighter, along with many of the zoo animals, which he intends to sell upon arrival. Somewhere east of the Philippines, the ship suffers a disastrous engine explosion amid a bad storm and sinks. Pi is the sole human survivor, having jumped into a lifeboat—along with, he discovers the next day, a zebra, a hyena, an orangutan, and the tiger. A tense drama of survival ensues, played out over endless weeks. Lee’s movie is considerably less horrifying than the novel, in which the violent death battles of Pi’s animal passengers are described in gory detail; the film averts its eyes from the worst of it, and lets us focus on the desperate ingenuity through which Pi, having realized that he must coexist with the tiger, figures out how to train him, and ultimately fashions a companionate relationship, albeit a volatile and alarming one.

Like the novel, the film uses a framing device in which the adult Pi tells his story to a writer who tracks him down in Canada, following the lead of a man in India who referred to “a story that will make you believe in God.” That story shows Pi’s youthful piety tested and ultimately deepened, rather than demolished, by his brutal trial at sea. “Even when God seemed to have abandoned me,” the older Pi says, “he was actually watching.” But how, exactly? Life of Pi connects its conception of spirituality with human imagination and specifically with the act of storytelling itself. The novel’s coda, faithfully replicated in the movie, pulls off a sly metafictional—and metaphysical—trick. Days after finally coming ashore in Mexico and being rescued, Pi is questioned in the hospital by shipping company investigators who regard his story of surviving with a tiger as dubious in the extreme. Pressed to tell the truth, he offers up an alternate version in which his mother, a sailor, and the ship’s cook land with him in the lifeboat, triggering a brutal struggle for survival from which he alone emerges alive, having witnessed horrors that include cannibalism and the murder of his mother.

Do we believe that this far more realistic story tells what really happened to Pi? Perhaps we do; yet it comes off as a paltry reduction of whatever it is that the boy has gone through—of whatever it was in his spirit, will, and imagination that empowered him to persist. “Which story do you prefer?” Pi asks the investigators. (In the movie this colloquy is transposed to his interview decades later with the writer.) “The one with the tiger,” they answer. At a blow we understand that mere documentary truth must yield—indeed has already yielded—to storytelling; that poetry and the imagination constitute both the true expression of the soul’s encounter with experience and, in situations of mortal hardship, a means of human survival.

Alas, appending a metafictional disquisition to your novel works better than doing the same to your film. Is everything we’ve seen with the animals, the entire, richly detailed interaction with the tiger, to be understood as some kind of allegory, or as a fantasy born in direst horror? Film’s images have a powerful way of insisting on their own reality; it is harder to “flip” a narrative you’ve been watching for two hours and come away satisfied. What deepens meaning in the novel comes off as both forced and oddly self-congratulatory in the film.

It is hard at any rate to see why this story would make you believe in God. What exactly is meant by the payoff line Pi delivers—“And so it goes with God”—after his interlocutors admit that they prefer the tiger story? Are we to understand that religion, that God himself, is no more than a saving fiction? That our human story is better if we include God? That God himself prefers stories that include him? Showcasing a poetic and easily accessible mysticism, and rife with arcane spiritual hints (e.g., the name of the sunken ship, Tsimtsum, is Hebrew for God’s withdrawal from the world), Life of Pi is billed as a religious movie, but the nature of its religion is hazy in the extreme. “If you believe in everything,” Pi’s father cautions, “you will end up believing in nothing at all.” In The Flat, Israeli filmmaker Arnon Goldfinger digs into the past of his recently deceased ninety-eight-year-old grandmother, Gerda Tuchler, who left Germany before WWII and lived out her long life in the community of “Yekkes”—German Jews, only partly assimilated to Israeli life, whose profoundest attachment remained to German culture. Going through his grandmother’s papers, Goldfinger finds letters that attest to her and her husband’s friendship with an aristocrat and Nazi functionary, Baron von Mildenstein. In 1937, on a mission to scout locales where Germany might unload its Jews, Mildenstein and his wife visited Palestine—together with the Tuchlers, who were resettling there. When Goldfinger discovers that the friendship resumed after the war, he decides to dig into the story, eventually traveling to Germany to meet the Mildensteins’ daughter.

The Flat has a casual, even cursory feel, but it gathers momentum almost despite itself. It illuminates the particular tragedy of German Jews, who clung to their Germanness even through the Holocaust, and captures the willful silence of the next generation of Jews and Germans alike. In this regard, Goldfinger’s mother and the Mildenstein’s daughter, both now nearing seventy, are mirror images of each other, their mutual reluctance to talk or even think about their parents’ histories suggesting an inner life marred by avoidance and denial.

Far more haunting than The Flat’s trumped-up confrontation with the Mildenstein descendants in Germany are scenes that capture the Goldfinger children going through their grandmother’s possessions. Youthful upper-middle-class Israelis, habitually casual and irreverent, they’re impatient with the clutter and inclined to throw it all out. In one scene they play prankishly with a mink stole, wrapping it around each other’s necks in mocking disbelief that anyone could have ever worn an animal. I found myself shuddering with a sense of sacrilege to see the relics of their grandparents’ world—the German bourgeois world brought with them and maintained, under pressures of the most desperate paradox—made the object of lighthearted whimsy.

Well, it was a long, long time ago. Almost everyone who lived through it is dead; and those who remain, the grandchildren and great-nieces and nephews, are living happy lives in a world far removed from that time and place. The Flat is not a great documentary, but it has the great advantage of taking place at the moment when individual memories of the Fascist nightmare yield definitively to the collective memory of history. Those descendents plowing through old boxes—they laugh, and then they move on.