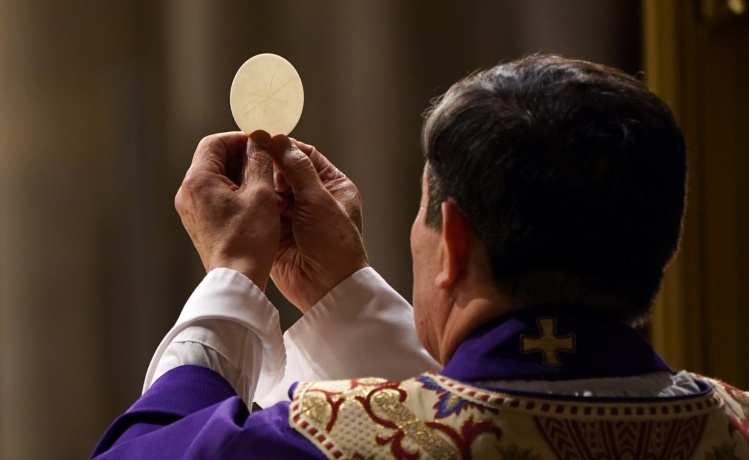 In his article “Separate Challenges” (September 2021), Peter Steinfels argues that the U.S. bishops do not need another document on the Eucharist but rather a strategy on the Eucharist. Many bishops agree, and have therefore proposed developing a strategy designed to lead to a Eucharistic revival in our Church. The essential starting point must be the needs of our people as they live in this present moment and culture. Context is key. Every effort should be made to avoid an ahistorical presentation of the Eucharist that is abstracted from daily life.

With that in mind, I offer five themes that might be considered in shaping a process that invites dialogue with the people we serve and reflects the pastoral, catechetical, and formational challenges that are specific to the U.S. context today: the imperative to worship; the necessity of the Eucharist; the Eucharist as call to participation; the Eucharist as model of self-giving; the Eucharist as the sacrament of the Lord’s abiding presence.

The Imperative of Worship

In Catholic tradition, the Eucharist is the central act of worship that sustains the life of faith. Worship itself, however, is often marginalized in a culture that is driven by deep-seated commitments to individual freedom, self-fulfillment, and self-expression.

In practice, Americans, including many Catholics, view worship as one choice among many, something one does if one so desires, or has time. My predecessor, Cardinal Francis George, OMI, suggested that many people, again including Catholics, put Sunday worship on par with other recreational choices or tasks to complete. If one has the time and inclination, one will go to church—or, if not, choose to go shopping, do laundry, or watch football.

If Eucharistic formation, catechesis, and revival are to happen, then the Church and its leaders must address this fundamental question of worship: Is it, in fact, optional or is it necessary?

The words of the Yiddish writer Isaac Bashevis Singer come to mind. He said, in effect, that if we don’t worship God, we will worship something else, and perhaps, tragically, we will worship ourselves.

In Catholic catechesis, the Sunday obligation has traditionally had its roots in the Third Commandment, “Remember to keep holy the Lord’s Day.” Of course, keeping holy the Lord’s Day entails worship. But perhaps the obligation and, even more, the necessity of Sunday worship is more tied to the First Commandment: “You shall not have false gods before me.” We will inevitably worship because there is something in our nature that moves us to awe and surrender before something greater than ourselves. The question, however, is what or whom will we worship? In a self-referential age plagued by all kinds of addictions and a (not unrelated) thick culture of consumerism, our worship can easily steer us away from God. The ever-present danger in this moment is idolatry. Consequently, if we are to spare ourselves the entrapments of the many idols that mark our lives, then worship of God is necessary. Indeed, there is a Eucharistic imperative. And this leads to a second and related theme of the vital importance of the Eucharist.

In a self-referential age plagued by all kinds of addictions and a (not unrelated) thick culture of consumerism, our worship can easily steer us away from God.
sharetweet

The Eucharist as a Matter of Life and Death

Americans might be able to comprehend the great importance of worship, but to characterize the Eucharist as a matter of life and death may seem to be an excessively dramatic description. In fact, the words of Jesus support this vital sense of the Eucharist and Eucharistic worship: “Jesus said to them, ‘Amen, amen, I say to you, unless you eat the flesh of the Son of Man and drink his blood, you do not have life within you. Whoever eats my flesh and drinks my blood has eternal life, and I will raise him on the last day’” (John 6:53–54).

We need to take Jesus at his word. Any Eucharistic formation, catechesis, and revival must have a strong biblical base in the words and actions of Jesus. This passage from John 6 illustrates the importance of staying close to the Word as a means of staying close to the Eucharist. And the words of Jesus about the bread of life clearly resonate in these trying days when death-dealing forces appear to have the upper hand. Think of the pandemic, the street violence and killing that plagues our cities, the disrespect for human life in its most vulnerable stages and conditions, the lethal degradation of the environment, and the specter of war that haunts the world. An essential catechetical task today is to draw a line from the deadly challenges we face today to the Eucharist as the bread of life. If we do so, then it is no exaggeration to say that the Eucharist is a matter of life and death.

The Eucharist as Summons to Participation

The heart of the Eucharistic prayers we hear at Mass includes four actions that we are to perform in memory of Jesus: he took bread, blessed it, broke it, and gave it. The Eucharist is not fundamentally a static reality. The Eucharist is an action or an event, the Lord’s action in his Paschal Mystery, which summons our participation.

Some sixty years after the promulgation of SC, many Catholics neither know their call to active participation in the Eucharistic mysteries nor have they made an intentional commitment to it. At best, active participation seems to mean having a particular role to play in the liturgy (greeter, server, lector, Communion minister). The full and conscious participation that means internally joining ourselves to the death and resurrection of the Lord celebrated in the Eucharist seems to have eluded many Catholics.

In place of active participation, some seem to view their engagement with Eucharistic worship in a number of other ways: the fulfillment of an obligation, a meditative moment in their otherwise busy lives, or as an opportunity to receive inspiration or encouragement. How many of our Catholic brothers and sisters seem to conceive of the liturgy as a spectator sport? How often do we hear, “But I don’t get anything out of it”? The passivity suggested by such an approach is the opposite of active participation.

Any effective Eucharistic catechesis, formation, or revival must take into account not only the Eucharist in itself but also our response to the Eucharist. That means focusing on the understanding of active participation in the Eucharist.

From the Sacrifice of Jesus to Our Sacrificial Living

Active participation (participatio actuosa) must also be fruitful participation (participatio fructuosa). As we join ourselves to the self-sacrificing love of Jesus manifested on the cross, we are called to replicate his sacrifice in our daily lives. When we do that, we live out his mission through our decisions, actions, and relationships. The sacrifice of Jesus encountered in the Eucharist is both the model for our lives and what enables our self-sacrificing love.

The Eucharist necessarily leads us out of the liturgy into ordinary life, where we enact what we have celebrated.
sharetweet

Too few Catholics truly grasp that the Eucharist necessarily leads us out of the liturgy into ordinary life, where we enact what we have celebrated. Our context may be marriage and family, the workplace, the wider community, and even the natural world itself. More commonly, people tend to view the Eucharistic celebration as self-contained, whose lessons and imperatives can be safely left in church until next Sunday. Yet true participation in the Eucharist necessarily shapes our moral choices, orienting us to serve those in need, and guiding us to strengthen relationships.

Americans tend to live largely compartmentalized lives. We feel comfortable separating realms of living—for example, the private, public, religious, civic, financial, or recreational. The Eucharist, however, calls us to an integrated life marked by the same self-sacrificing love that is celebrated as the great mystery of our faith. In effect, the challenge of Eucharistic catechesis, formation, and revival in this context is really a challenge of imagination. We are invited to reimagine our lives as oriented toward unity and integration through the Eucharist. It is for this reason that great care should be given not to make the Body and Blood of Christ into an object we control. No, active participation in Eucharistic worship is rather the primary way in which we experience our transformation in Christ.

The Eucharist Is the Sacrament of the Lord’s Abiding Presence

Eucharistic adoration is a legitimate development of piety in the Western Church with many benefits for those who engage in it. Adoration highlights the abiding presence of the Lord in his sacrament. And with that sense of presence, we also grasp his availability to us. As a spiritual practice, adoration offers an opportunity for quiet and meditative prayer focused on the Lord present in his sacrament. In recent decades, this form of prayer has gained followers in the United States for whom it has become a very important dimension of their spirituality.

Although there are many positive elements in Eucharistic adoration, it also needs the context and direction of Eucharistic catechesis and formation to avoid narrowness and even distorted perceptions of the sacrament itself. For example, without the proper context, Eucharistic adoration can privatize one’s relationship to the sacrament and to the Lord himself. Although the prayer associated with adoration can and should be personal, it cannot be merely private and authentically Eucharistic at the same time. The liturgical books that offer the pathway for adoration assume a community context—proclamation of the Word of God, perhaps some music, and a common gathering of the faithful for adoration. Similarly, adoration cannot “objectify” the Eucharist, making it a static reality. Adoration must come from and lead to the Eucharistic celebration. It is never detached or entirely separated from the liturgical celebration.

Catholic leaders, including bishops, should not be afraid to give this matter the time and attention it deserves, as our singular aim must be serving the people of God in a way that builds up the Body of Christ. Peter Steinfels is right: we do need a strategy for launching a Eucharistic revival that begins with addressing the particular cultural-historical context and the questions that belong to this moment in American life. But if that strategy is to be successful, it must be grounded in a robust and sound theology that reminds us what the Eucharist means, not only for our practice of worship, but also for how we leaven the world the Lord made for us.

Cardinal Blase J. Cupich is the ninth archbishop of the Archdiocese of Chicago.

Cardinal Blase Cupich on the Signs of the Times