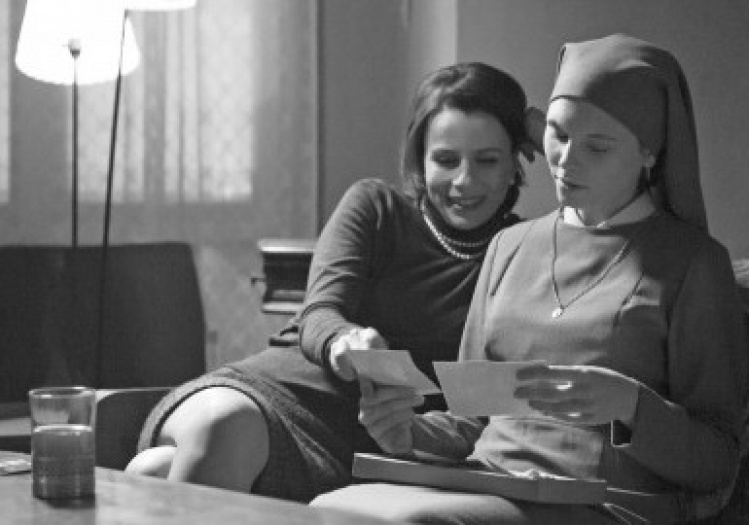 Austere, quiet, its gravity tempered by bursts of harsh irreverence, Ida grabs your imagination and won’t let go. Set in the dreary Communist Poland of the early 1960s, the film charts the spiritual travails of Anna (Agata Trzebuchowska), an orphan raised since infancy in a convent. Now a beautiful and dreamily solemn twenty-year-old, Anna is preparing to take her vows when her Mother Superior discloses that she has one living relative—an aunt—and orders the novice off on a visit. When Anna arrives, her aunt, a jaded middle-aged woman named Wanda (Agata Kulesza), gives shocking news: Anna’s real name is Ida Lebenstein, she is Jewish, and her parents—Wanda’s sister and brother-in-law—were murdered during World War II. This revelation sets the two off on a trip to the family’s village to dig into the secrets of a harrowing and still-recent past.

Ida is one of those films in which close attention to character provides ever-deepening interest even as it adroitly cues up larger themes. Anna and Wanda make for an unlikely pair. In their first moment together we see them standing in the doorway of Wanda’s apartment: Anna, erect and prim in her novice’s habit, and Wanda, slouching, cigarette in hand, a loose robe falling away from her body, an expression of hard irony on her face. We’re surprised to learn a bit later that she is not an aging actress, or even perhaps a prostitute, but rather a judge and Communist Party hack. At the core of the film is the byplay between the two women as they navigate the dreary Polish countryside—Anna, silent and pious, looking on as her aunt smokes, drinks, and picks up men, now and then pausing to inveigh against what she takes to be Anna’s presumption of moral superiority. “So,” she says at one point, “I’m the slut and you’re the little saint.”

Though a deep familial pull draws these two together, they are antagonists by both personality and predicament. For Anna, the time with Wanda constitutes a kind of nun’s rumspringa, in which facing the temptations of the world beyond the cloister may help her return with her spiritual commitment fortified. Wanda, for her part, has experienced her own crisis of faith. A decade ago she was an enthusiastic enforcer of party policy, a notorious show-trial judge known as “Red Wanda.” Whatever moral certainties might have attached to that role are long gone, however, and her reckless self-destructiveness suggests deep personal torment and a wish for oblivion. Her dissolution fascinates her niece, and it is an open question whether Anna’s faith will be able to withstand either Wanda’s bludgeoning skepticism—her gruff dismissal of “this Jesus of yours”—or the temptations she trails in her wake.

In chronicling how the two prod one another toward their separate destinies, writer-director Pawel Pawlikowski (My Summer of Love) propels his film along two tracks. One follows the fearless Wanda, channeling her bitterness into outrage as she investigates the village where the Lebensteins once lived, questioning its residents and encountering evasion and denial at every turn. The second follows Anna as she confronts temptation in the person of a handsome saxophone player (Dawid Ogrodnik) in a band performing at the hotel where she and Wanda are staying. With a sense of vicarious trespass we watch as Anna sneaks down from her room to stand listening to jazz, uncomfortable in the setting but unable to leave, mesmerized by the suggestion of a world in which the beauty she has associated exclusively with devotion may exist wholly on its own.

Shot in black and white, Ida exudes a gorgeous spareness, and its still camera, long takes, enveloping silences, and box-like, nearly square format bolster the film’s timepiece authenticity. Pawlikowski and his cinematographers, Lukasz Zal and Ryszard Lenczewski, deploy carefully composed shots, as when Anna, alone in her aunt’s apartment, puts on one of her dresses, dances to music, and wraps herself in a lacy curtain, a studied visual counterpoint to the ceremonial shrouding in the nun’s wimple when the novices take their vows. The film’s rigorous minimalism makes the slightest move register big. When the musician, sitting alongside Anna on a bench outside the hotel, says to her, “You have no idea whatsoever of the effect you have, do you?” their eyes meet for a second, and a bashful and uncertain smile flickers across her face. It plays huge. The expressive register is so severely restrained that multiplicities are contained in a single look.

Such restraint evokes the films of Robert Bresson, though visually Ida is more artfully composed than Diary of a Country Priest or Pickpocket. Pictures tell the story more than words. The glimpses of life in the convent portray a dour and stifling regimen; there is none of the joy of such films as Into Great Silence, that convey the deep satisfactions of spiritual seclusion. Pawlikowski is not beating up on religious life; the aridity of the convent is of a piece with the bleakness of life outside, in the dismal, muddy villages and defaced towns of a Poland caught in the Stalinist stranglehold. The rampant dreariness incites the turmoil Anna is clearly feeling beneath the surface of her repose—the stirrings of a sensual and even an erotic life.

Pawlikowski powers his film by exploiting the tension between any number of opposites: the ethereal versus the earthy and erotic; the enclosed safety of the cloister versus the shapeless dangers of the world outside; Anna’s alabaster face versus her aunt’s haggard one and her prayerful solemnity versus Wanda’s voluble, scathing sarcasm; the rigidity of Communist bureaucracy versus the sexy fluidity of Coltrane’s music. What is this world out there, represented in ideal form by jazz and in debased form by Wanda’s promiscuous rampages, where passions are ignited by the spark of art, dance, sex, the body? The real mystery of Ida surrounds not religion and the religious life, but its opposite, and invokes a search for something sacramental in what most would call sinfulness. Anna is looking for it, despite herself, and when the camera catches her riding a streetcar and looking out at the world, eyes wide in curiosity and awe, it turns her into a kind of unwilling pilgrim.

WANDA’s MISSION is far more pointed. She storms through the village, drinking and driving and then haranguing the police who dare to arrest her; acidly rebuking a bartender for lying about knowing the Lebensteins; breaking into the apartment of an old man who may have sheltered the family—or may have killed them. In passing, Ida lays bare the viciousness of Polish anti-Semitism and its grim contribution to the Holocaust, joining a debate still raging today. Ida is the victims’ story, and it brims with sorrow, anger, and guilt. We learn little about the Lebensteins, because so little remains, just bits and pieces of a past that has been all but eradicated. One of the film’s many quietly moving moments shows Wanda, alone and drinking in her apartment, taking out a box of battered snapshots and making a small mosaic of her murdered family. Later, when Anna explores the barn of a village house that once was the Lebensteins’, she finds a small stained-glass window in a cow stall—put there in girlhood by her mother, Wanda tells her, who wanted the cows to be happy. Deploying with poignant irony a staple of Christian churches, the scene anticipates the film’s shattering culmination, in which at last a villager reveals the fate of the Lebensteins, and the metaphor of digging for the truth is brought to bear with awful literalism.

If I have a complaint about Ida, it concerns the part of the film in which Anna, having enunciated her doubts in solitary prayer (“I’m not ready,” she murmurs), abandons her cloistered life and makes a leap into worldliness. Her trial by temptation proves unsatisfyingly truncated. Sampling some of the attractions—performing, in effect, a miniature simulacrum of her aunt’s lifestyle—she involves herself briefly with the musician, who tenders an offer of a future together: travel, love, marriage, children, a house. This offer and the vision behind it are disposed of way too quickly. Partly the problem is Pawlikowski’s insistence on keeping Anna so silent, rarely letting her speak, so that we can only infer what might be happening in her mind and heart. Such inferences are made from closeups, rapturously beautiful but also stark and discomfiting, that evoke the luminous facial studies of Carl Dreyer’s The Passion of Joan of Arc. Pawlikowski heightens his film’s mystery—and beauty—at the risk of making the character at the heart of it truly enigmatic. I would have liked to hear more.

But this is perhaps to fault a film for its strength. Ida sets itself on stillness and silence, and in so doing, takes aim at difficult and rewarding ironies. There is the stillness of meditative spiritual life, but also the silence of secrecy, the suppression of dreadful acts; and worse yet the silence of eliminated voices, the stillness beyond the unmarked grave where those dread secrets lie buried. For us, meanwhile, looking back from the early twenty-first century, another kind of silence descends, comprising that moment when no one who witnessed these events will remain alive, and personal testimony yields irrevocably to the abstract and collective narrative of history.

Somber and luminous, Ida captures all this, even as it hints at the possibility of still greater silences. “What if you go there,” Wanda says when Anna conveys her desire to see the Lebensteins’ home, “and discover there is no God?”