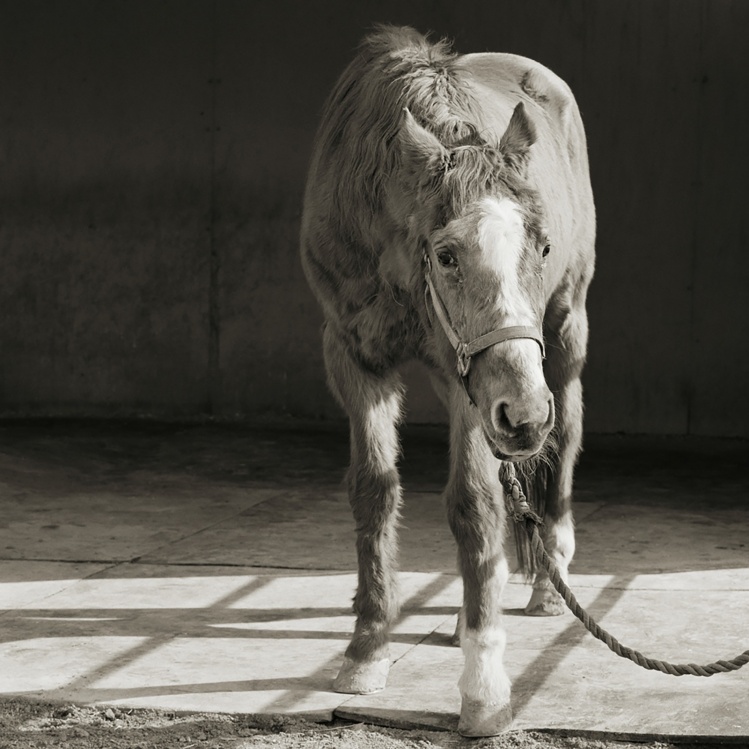 Handsome One, a Thoroughbred horse, age thirty-three, was surrendered to a sanctuary when he retired from racing. (Copyright Isa Leshko / Image courtesy of the University of Chicago Press)

It was one of my more memorable Airbnb reservations—a small apartment located under the eaves of a barn, part of a working horse farm in western Massachusetts. A friend and I were staying during an academic conference held at a nearby college.

As soon as we pulled into the driveway, we saw Charm and Ranger prancing in the barn. They were therapy horses, their handler proudly informed us, former racers who’d been abused and neglected by previous owners. Since rehabilitated (though still arthritic), they were now working with emotionally vulnerable adults, many of whom were former victims of abuse themselves. After feeding the pair a few handfuls of sunflower seeds, we watched Charm “hug” a young woman, who beamed as the horse sidled up beside her and enfolded her gently within his long neck. In that instant, we watched the animal become something more than just a horse: he was an individual with a story, a creature with a face and a name.

A similar conviction—that all animals are individuals, endowed with grace and dignity—informs the mesmerizing black-and-white photographs in Isa Leshko’s Allowed to Grow Old: Portraits of Elderly Animals from Farm Sanctuaries (University of Chicago Press, $40, 126 pp.). The project, which took Leshko nine years to complete, began by chance. The photographer was visiting her sister in rural New Jersey in 2008, taking a respite from caring for her elderly mother, who was then dying of cancer. Wandering outside to a field where some horses were grazing, she was immediately taken with Petey, a thirty-four-year-old horse who had “deep hollows above his cataract-laden eyes” and a coarse coat, and walked with a “pronounced sway.” She grabbed her camera and started shooting. Only later, upon reflection, did Leshko realize that she’d finally found a way to process the grief and anxiety surrounding her mother’s illness—aging and death, Petey taught her, have a beauty all their own.

Allowed to Grow Old tracks Leshko’s systematic exploration of the strange beauty revealed by these leftovers of the animal world, all residents of hospice-like “farm sanctuaries” scattered throughout the United States. She depicts her subjects—not just horses, but also chickens, turkeys, dogs, cows, pigs, and goats, mostly rescued from factory farms—in moments of vulnerability. To gain their trust, Leshko spent several days sitting quietly with each animal, first clearing her mind via meditation, then bending her knees and scrambling through grass, mud, and hay so that she could meet each animal at eye level. Shot from this posture of humility, using only natural light, Lesh­ko’s photos reveal subtle, ennobling details—the downy white neck feathers of Ash, an elderly turkey napping with his head upside down, or the flaring wet nostrils of Violet, a potbellied pig with partially paralyzed hind legs.

Animal photography, as Leshko explains, has long been associated with hunting. (This is true even at the level of vocabulary; both require “shooting.”) In photography’s early days, hunters used cameras to record their quarries and conquests. But Leshko is after something altogether different, and more spiritual. Her photographs of elderly animals serve not as documents of death, as theorists like Susan Sontag or Roland Barthes would have it, but instead as images of life, and ultimately, of gift.

Barney taps into something our national discourse could certainly use more of—namely, mysticism, the capacity to wonder at what we don’t yet know.
sharetweet

Hunting, and specifically the porous boundary between the human and animal worlds, also lies at the center of Redoubt, an ensemble project by video artist Matthew Barney that opened at the Yale University Art Gallery last spring. Its innovatively designed catalogue, Matthew Barney: Redoubt (Yale University Press, $50, 368 pp.), has the look and feel of a field guide. One of the contemporary art world’s most provocative figures, Barney is known for producing over-the-top films, sculptures, and drawings that intertwine wide-ranging subjects—human sexuality, geography, pop culture, and consumerism—with his own ever-evolving personal mythology.

Barney has always created self-enclosed aesthetic worlds, and as its title implies, Redoubt is no exception. Taking his native Idaho—specifically the wolf-inhabited, wildfire-prone wilderness of the majestic Sawtooth range—as his point of departure, Barney builds his project around a two-hour film, shot on location during a particularly harsh, snowy winter. There’s no spoken dialogue; instead, Barney is interested in exploring how other kinds of language—music, dance, the motions of celestial bodies, and the rhythms of the natural world—can help break us out of our mental fortresses, freeing us to contemplate and commune with something larger. Redoubt also includes monumental sculptures made from burned tree trunks and brass alloys, along with copper engravings that have been deformed via an innovative “electroplating” process.

The “plot” of Redoubt (such as it is) is an adaptation of one of the most well-known myths from Ovid’s Metamorphoses. In that text, the hunter Actaeon wanders through a forest and stumbles upon the goddess Diana as she bathes with a group of nymphs. He observes her from behind a veil, but she catches him and, enraged, transforms him into a stag, who is doomed to be tracked and killed by his own dogs. In Barney’s version, Diana is a camouflaged sharp-shooter wielding a rifle with a high-powered scope, Actaeon an employee of the National Park service who takes time from his surveying duties to engrave her image on copper plates. Over the course of six distinct “hunts,” the engraver tracks Diana as she and her nymphs track a wolf, who stands as a symbol of both the savage violence and rugged beauty of rural Idaho’s vast expanses.

If this sounds somewhat confusing, that’s because it is—Barney has a knack for entangling esoteric strands of meaning without weaving them into an overarching interpretive framework. Redoubt is in some sense an allegory of contemporary America (we the people are lost in a  political wilderness, trapped in our private redoubts—real or virtual—as forest fires burn all around). But the exhibit isn’t really supposed to make sense in any straightforward way. Rather, it serves as a subtle invitation to let go of our need to know and understand. Barney taps into something our national discourse could certainly use more of—namely, mysticism, the capacity to wonder at what we don’t yet know.