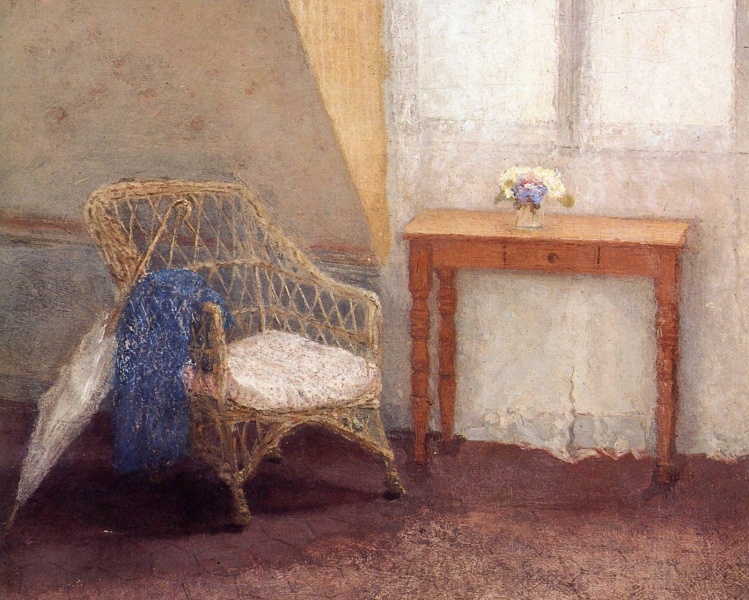 Gwen John, A Corner of the Artist's Room in Paris, 1909 (Museums Sheffield)

We live in fraught times. Okay, that’s a cliché. Maybe the “fraughtest times”? “An age of adrenaline”? Trade wars and shooting wars wax and wane. Monsoons inundate Midwestern farms while Congress dithers over disaster aid. Constitutional checks and balances have broken down. President Trump refuses to deal with Congress until House Democrats renounce their oversight responsibilities. Speaker of the House Nancy Pelosi condemns his refusal as a “cover-up.”

You can drop the news channels. Close the newspaper. Turn off the computer and the radio. That won’t stop the media reporting every word and deed of fabulists and fools. Of course, we look and listen. As Pete Buttigieg, mayor of South Bend and Democratic presidential candidate, observed in a recent interview, the president’s ability “to command the attention of the media…is mesmerizing.” It’s “hard for anyone to look away,” including himself, he admits. Why so hard? “It is the nature of grotesque things that you can’t look away.” Frazzled citizens need some downtime from all the threats, lies, name-calling, and grandiose claims. Admit it! It’s hard to change the channel.

Deliver us, O Lord, from the mean-spiritedness that lays on the land. Instill in us a spirit of generosity and truthfulness.
sharetweet

The media, increasingly aware that this constitutes obsessive behavior, inserts self-help advice among the tweet reports. Here are some recent tips I have encountered. First, recognize the very limited capacity of your attention span. How can it function properly, focus on anything, when it is taken up with the ins and outs of conflicting White House words and deeds, the feints and thrusts of Congress, the hits and misses of twenty-four Democratic presidential candidates, and the ducking and weaving of administration officials caught between the law and the tweets? We are, after all, fight-or-flight creatures; we can respond to one danger, but ten is too many. Center yourself. Set time limits on any discussion about the president’s daily headlines. Get off Twitter. Do not roll your eyes. Change the subject.

Second, relieve your anxieties with good deeds. From a neighbor, this idea: she asks friends to observe her birthday by doing a good deed, maybe more than one. Her hope is that many, many good deeds on the same day might buoy our spirits and inch the nation toward greater tranquility. “Who knows,” she writes, “this could be the beginning of a kinder and gentler world.” Who knows, indeed? I offer my own birthday, July 28, for an outpouring of good deeds.

Third, take your mind off your mind and make your legs, upper arms, and back take on some of this burden. More physical exercise will not hurt. Using a straight-backed chair, sit down and stand up ten times. Do an extra hour on the stationary bike (no TV!). Walk to the store, buy a newspaper, read the headlines, and throw it in the trash. Keep walking. Do not cheat by trawling the internet on your phone.

Fourth, try knitting meditation. According to the Wall Street Journal, it calms the mind, promises lower blood pressure, and improves mental health. Google, the source of so much over-connectedness, has hired a company to help employees relax through mindful knitting. The firm, Heartknit, offers workshops that “keep phone-addicted hands and minds occupied, but calm.” According to a University of Texas psychiatrist, knitting entails “evenly hovering attention,” meaning “your mind can wander when you’re doing something routine.” Heartknit’s workshop leader says that, since there is no “right or wrong way to knit,” you follow your own rhythm; “it’s about the journey, not the scarf.” Mindful knitting may seem to many no different from mindless knitting, so you may end up with a scarf, a large blanket, or a three-armed sweater. Your attention span, however, can evenly hover, your mind wander but remain calm, and your phone-addicted hands stay otherwise occupied.

Finally, Speaker Pelosi herself has given a clue to what many of us might do. In the midst of a very difficult day with the president, sounding like Sr. Mary after a hard day with a first grader, Pelosi simply said, “I pray for him.” You might try something along these lines: “Deliver us, O Lord, from the mean-spiritedness that lays on the land. Instill in us a spirit of generosity and truthfulness. May good works bring peace and justice. Amen.” And if that doesn’t overcome the irresistible power of the grotesque? Well, there is always exorcism.