From St. Nicholas to Santa Claus: An Interview

Christmas was an especially big production at my parents’ house. If you drove past our family’s white stucco bungalow, you could not miss the giant inflatable Santa Claus on the front lawn. If you ventured inside you would find a festive five-foot rug featuring another Santa, a fabric Advent calendar taking up three feet on the wall, stained glass angels in the window, and more than one crèche. That my father, Gerry Bowler, is a historian specializing in the social history of Christmas explains some of the enthusiasm. When we decorated the tree, he would lovingly insist on explaining the mythic history of the “Christmas pickle” to his daughters as soon as one of us reached for the pickle-shaped ornament. Around this time of year, reporters would call to ask him why we kiss under mistletoe or about the history of coal-filled chimney stockings. This year, I joined the fray and posed him some questions about St. Nicholas over email.

As the patron saint of children and students he becomes associated with Christmas, firstly through the Boy Bishop custom which begins in the 900s in Germany. On St. Nicholas’s Day, December 6, a boy chorister is chosen as a mock bishop with certain privileges (such as demanding presents for himself and his followers) which last until December 28, the Feast of the Holy Innocents.

How did he bring gifts?

Up until the 12th century if children wanted gifts at Christmas, they had to demand them. The month of December was a time for marginal groups like old women, the poor or children to go door-to-door requesting treats or food or money. A change occurred when some nuns began putting little gifts in the shoes of children, on St. Nicholas’s Eve, and telling the kids that the treats were from the saint. This was the invention of a Christmas, magical, night-time gift-bringer. Over the centuries there would be others — St. Catherine in late November, especially for little girls; scary ones like Perchta the Disemboweller, various goat-creatures in Scandinavia; or kindly ones like Tante Arie or La Befana. Some came on their saint’s day, some on Christmas Eve, some on Epiphany, but St. Nicholas was the leader of the pack until the Reformation.

What happened around the Reformation?

During the Reformation the Protestants decided to ditch the cult of saints and out went St. Nicholas from most of the reformed territories. Some Protestants — those in Scotland and English Puritans — went so far as to abolish Christmas observation altogether.

In some places where Christmas was kept, parents needed a new magical gift-bringer. So it was natural for ministers to suggest that it was the Christ Child who brought all good things — in Germany he becomes known as das Christkindl (from which Kris Kringle will phonetically emerge). But the problem with the Christ Child is that he lacks two of the attributes of St. Nicholas: (1) his ability to install fear and good behaviour (St. Nick was not slow in laying the switch to kids who had been bad or didn’t learn their catechism) and (2) his capacity to carry gifts. So the Christ Child or le petit Jesus comes to be represented as a young angel (usually of female aspect) and is given a big shaggy helper who does the scaring and the carrying. This helper is given names that often carry on the Nicholas tradition — Pelznickel or Belsnickel (Nicholas in Furs), Ru-Klaus (Rough Nicholas) or Aschenklaus (Nicholas in Ashes). There are countless variations such as Père Fouettard (a monk with a whip or switch) or Krampus (a demonic helper) who have the franchise in various localities.

In England I can find no trace of any magical gift-bringer after the reign of Bloody Mary (1553-58), the last Catholic ruler in the 1500s. In the Netherlands, which was divided between Catholic and Protestant, parents kept St. Nicholas despite orders by the Protestant clergy to close down the St Nicholas fairs that sold toys and treats and to stop baking the big cookies in the shape of the bishop-saint. This is vastly important because when the Dutch colonies North America in the 1600s they bring St. Nicholas with them to New Amsterdam (later New York) and the Hudson River Valley settlements. Dutch families keep his memory and customs alive even after the English conquest (1664) and then American independence.

What does this all have to do with Santa Claus?

In England and America Christmas had become debased by 1800. It had lost much of its religious significance; it had become associated with outdoor merriment, drinking and noise-making. Its long-time association with charity had largely been forgotten. In Boston, Philadelphia, and New York, citizens complained about drunken mobs in the streets attacking black people, immigrants and the middle-class. In order to transmute this alcohol-fuelled, young male, raucous disorder into an indoor, domestic, child-centred holiday, some New York intellectuals, writers, and artists called on St. Nicholas. The New-York (note the hyphen) Historical Society took Dutch-American folklore and publicized the gift-bringing saint Sinterklaas. Poets and artists soon produced works about Santeclaus, Sandy Klaw, or Santa Claus whereby St. Nicholas lost his bishop’s clothes and got the furs once worn by the shaggy helpers like Belsnickel. He now came on December 24, not December 5 and was over the course of the 19th century, as child-rearing practices softened, less judgmental. He went through a lot of costume changes, facial hair styles, ages, and size throughout the 1800s but by 1900 he was standardized as a portly adult-sized bearded grandfather figure in red and white.

What about in Europe?

Europeans abandoned their scary gift-bringers (though they often kept the old names) and soon had a Santa Claus figure in most countries — Father Christmas, Père Noël, der Weihnachtsmann, etc. After World War II ended (1945) Santa Claus had spread around the world with American troops and threatened the popularity of some of the native gift-bringers and customs. In Eastern Europe under Soviet occupation (1945-89) St. Nicholas and the Christ Child were suppressed and replaced by a Communist-imposed Grandfather Frost who ignored Christmas and came on New Year’s Eve. When the Soviet Union collapsed and Eastern Europe became free again, Santa Claus and the native gift-bringers tussled for supremacy. The last 10 years has seen a fight in the Netherlands, Poland, Germany, and Austria to defend St. Nicholas and in other countries to defend the Three Kings, the Baby Jesus, or La Befana against a global “Coca-Cola” Santa.

St. Nicholas continues his work and has not been outdated. He has been revived in the English-speaking world by Anglicans and Catholics who (without wishing to abolish Santa) want to remind children of the religious origins of Christmas gift-giving. He is also defended fiercely in Europe by those who treasure long-standing native customs over a globalized Santa who reeks of Americanness and Coca-Cola. In parts of the Netherlands it is illegal to appear dressed as Santa until after St. Nicholas’s Day (December 6) so that the saint has space to do his traditional Dutch duties. In Germany, Poland, the Czech Republic and Austria there are movements denigrate Santa and promote either St. Nicholas or the Christ Child as the Christmas gift-bringer. Here are some graphics to illustrate the point. 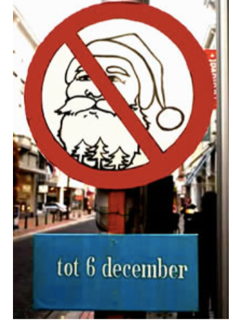 What do you think accounts for the desire for such a magical gift-bringer figure?

St. Nicholas and Santa Claus, to the extent that they encourage good behavior, are aids to parenting; they also help to ration children’s desires — “you can’t have it now; wait until Christmas.” What astonished and delights me is that the story of a secret Christmas gift-bringer is a conspiracy which has to be renewed by parents every generation. For centuries parents have deflected gratitude that they might have received from their children on to a supernatural, benevolent figure. In doing so they give their kids the gift of a heightened sense of time, of fantasy and imagination, of delayed gratification and, in material form, the Christian concept of grace. Every generation believes for a time, realizes the truth, and then agrees to carry on the myth for their own children. Quite remarkable.

Gerry Bowler is the author of Europe in the Sixteenth Century; The World Encyclopedia of Christmas; Santa Claus: A Biography, and a forthcoming book from Oxford University Press about the 2,000-year struggle to define, control abolish, reform, and preserve Christmas.