Digging for the Story
By Richard Alleva
Movies 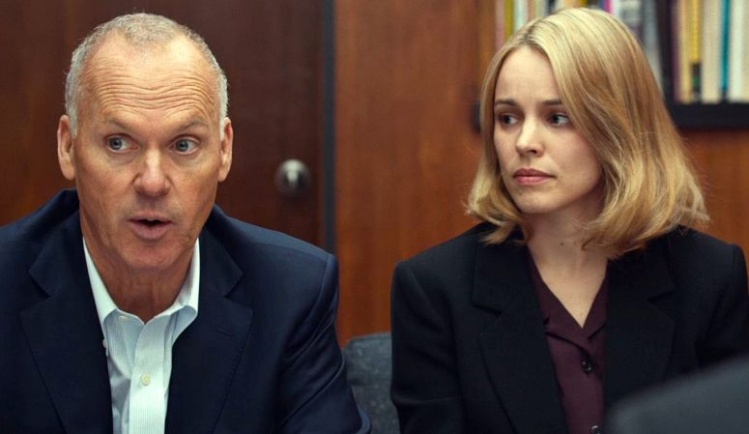 Before the so-called Second Golden Age of Television was launched on cable, the one network show that captivated me (and in re-runs still does) was Law and Order, whose most curious feature was the mostly missing private lives of its regular characters. These cops and DAs pursued clues, interrogated suspects, cut deals…and never went home. The drama was strictly of the workplace. Domestic details eventually crept in but only when they were tied to the investigations and prosecutions at hand. Later, showrunner Dick Wolf created a spin-off, Law and Order: Special Victims Unit, which took a different tack, immersing us in the private affairs and foibles of its heroes—so much so that the series continually tipped over into soap opera.

There is a similar contrast between two current movies, Spotlight and Truth. Both are about the splendors and miseries of journalism, and both are based on real events. Spotlight shows how the Boston Globe exposed the full extent of the sexual abuse of minors perpetrated by priests in the archdiocese of Boston. It portrays the Globe’s reporters as heroes, but theirs is a workaday heroism without flourishes or frills—no preachy monologues paying tribute to freedom of the press, no clichés of journalists jutting their jaws while righteously facing down hypocrisy and corruption. By contrast, Truth—about the downfall of Dan Rather at CBS—is soaked in personality. Specifically, the personality of Mary Mapes, Rather’s producer on 60 Minutes Wednesday. I was never sure whether the movie was urging me to lament the decline of the evening news or to weep for the misery of one nobly striving, high-strung producer.

Spotlight’s most salient virtue is a Spartan economy of storytelling that lets us lucidly follow the reporters as they track down their story. We witness the gradual discovery of horrifying crimes and an almost equally horrifying cover-up. “Spotlight” was the name of the Globe’s special investigative team, and the film shows how each member of the team had his or her special contribution to make. Some members interview victims; one tries to connect with a lawyer who was handling the lawsuits of dozens of victims; another approaches the former assistant DA who was in charge of the John Geoghan case, which led to further revelations; Spotlight’s chief, Robby Robinson, uses his friendship with a church attorney to secure facts; and the Globe’s new editor, Marty Baron [*], must establish some sort of relationship with Cardinal Bernard Law himself. It’s as if the many pieces of a huge jigsaw puzzle had been flung into a Boston windstorm, each piece landing in a different neighborhood. The storyline might have fragmented amid so much to-ing and fro-ing, but the script by director Tom McCarthy and Josh Singer keeps it all under control. No scene goes on too long or is cut off too soon. And despite the film’s inherently painful material, it never sinks into either sensationalism or mawkishness. The moviegoer’s intelligence is honored by the absence of stentorian music, overacting, and visual rhetoric. Spotlight is the most sinewy film I’ve seen in a long time.

Consider one moment. An interviewed victim, now an adult, tells of a priest buying him an ice-cream cone just before molesting him. “I never touched my ice cream. It just melted all down my arm.” That line is moving enough all by itself, but it’s followed by a close-up of that arm, which is now covered with needle tracks. There is real, unfussy poignancy in the combination of that image with the terse dialogue that precedes it.

Spotlight has an odd kinship with the recent gangster movie Black Mass. Both films portray Boston less as a major city than as a big town where every prominent person maintains some sort of alliance with every other prominent person, and where the dirty laundry of one institution is often washed by another. After publicizing the crimes within Boston’s most revered institution (at the time, 53 percent of the Globe’s subscribers were Catholic), the Globe may have been viewed by city officials as behaving like the black sheep within one big disorderly but basically happy family. But once the story was published, after nearly two years of research, the paper came to be perceived as providing a necessary catharsis rather than an unnecessary scandal.

The teamwork of the journalists is paralleled by the teamwork of the actors playing them. This is definitely the ensemble-movie cast of the year. A certain annoying twitchiness in the youthful Michael Keaton has mellowed with age and now comes across as a harnessed energy, sometimes a harnessed anger, that makes his character, Robby Robinson, a team leader to be reckoned with. Liev Schreiber’s apparent remoteness, which  masks an inner fire, helps him portray Marty Baron as a man fully aware of his outsider status—a Jew in an Irish Catholic city, a new editor not yet fully in rapport with his staff—and therefore determined to tread with care but not afraid, finally, to step on some important toes. Rachel McAdams shrewdly plays Sacha Pfeiffer as a reporter whose deep empathy allows her to connect with victims and elicit their testimonies. Mark Ruffalo eagerly barrels ahead as Michael Rezendes—it’s like seeing Superman’s Jimmy Olsen turn out to be a real person. And Stanley Tucci once again brings off one of his miracles of characterization—first by establishing Mitchel Garabedian, the overworked victims’ lawyer, as a man so unglamorous and unprepossessing that you might not notice him if he sat across from you on a train, and then, without any detectable actorly tricks, by gradually demonstrating that this dogged, rather sour, utterly humorless man is a hero. I don’t know how Tucci does it, but there it is.

AS FOR TRUTH, let’s file it in the drawer marked “underrated failures.” For the film has been underrated, probably because its release preceded Spotlight’s by only a few weeks and, yes, it does suffer by comparison. Yet the first third of Truth is excellent, detailing the efforts of CBS’s Dan Rather (played by Robert Redford) and producer Mary Mapes (a whiplash performance by Cate Blanchett) to put together a story about how the young George W. Bush allegedly received preferential treatment to get into the National Guard in the early 1970s, when many other young men were being sent to Vietnam. According to the CBS exposé, Bush also (temporarily) abandoned his flight training to work on a political campaign. Tightly scripted and directed by James Vanderbilt, this portion of Truth is as illuminating about network news as Spotlight is about the newspaper business.

But when Rather and Mapes run into post-broadcast trouble defending their facts, the movie runs into trouble, too. The main bone of contention was the memo supposedly copied by a disgruntled army officer and passed on to Mapes. Its veracity was questioned because the document’s font and letter spacing indicated that it might have been fabricated in the 1980s or ’90s on Microsoft Word rather than typed in the 1970s. Mapes finds evidence on both sides of the issue but feels that a basically true story is being nibbled to death by right-wing hacks and political operatives.

The fallibility of sincere journalists and the difficulty of verifying decades-old events is perfectly valid material for a movie. But Vanderbilt’s method brings his film closer to soap opera than to docudrama by offering Mapes’s tears as justification for her work. To be sure, her troubles (time away from family, her abusive father denouncing his own daughter on right-wing radio, sleeplessness, increased drinking) are the result of the controversy, but they tend to distract us from some important questions: Wasn’t CBS’s audience entitled to a thoroughly fact-checked story? And why did the fact-checking break down? We’re shown Rather and Mapes rushing their program to the airways to beat a deadline, but why the deadline? The story wasn’t breaking news and could have been aired later. (There is a brief chat about not wanting the story to be an “October surprise”: CBS didn’t want to be perceived as supporting John Kerry’s presidential campaign by releasing a negative story about Bush just before the election. But why would CBS assume that a September surprise would have less influence on the campaign?) Were there competitors about to scoop CBS? (Spotlight confronts competition pressure squarely by showing Mark Ruffalo trying to slow down the crucial refiling of a document so that the Globe can scoop the Boston Herald.) Perhaps the answer is in Mapes’s memoir, Truth and Duty, but it’s not clear in the movie. When truth is subject to a timetable, it may suffer, or at least find its way to the public in a raddled condition. That isn’t a major theme of Vanderbilt’s film, but it should be.

[*Updated to reflect correction of the spelling of Marty Baron's name.]