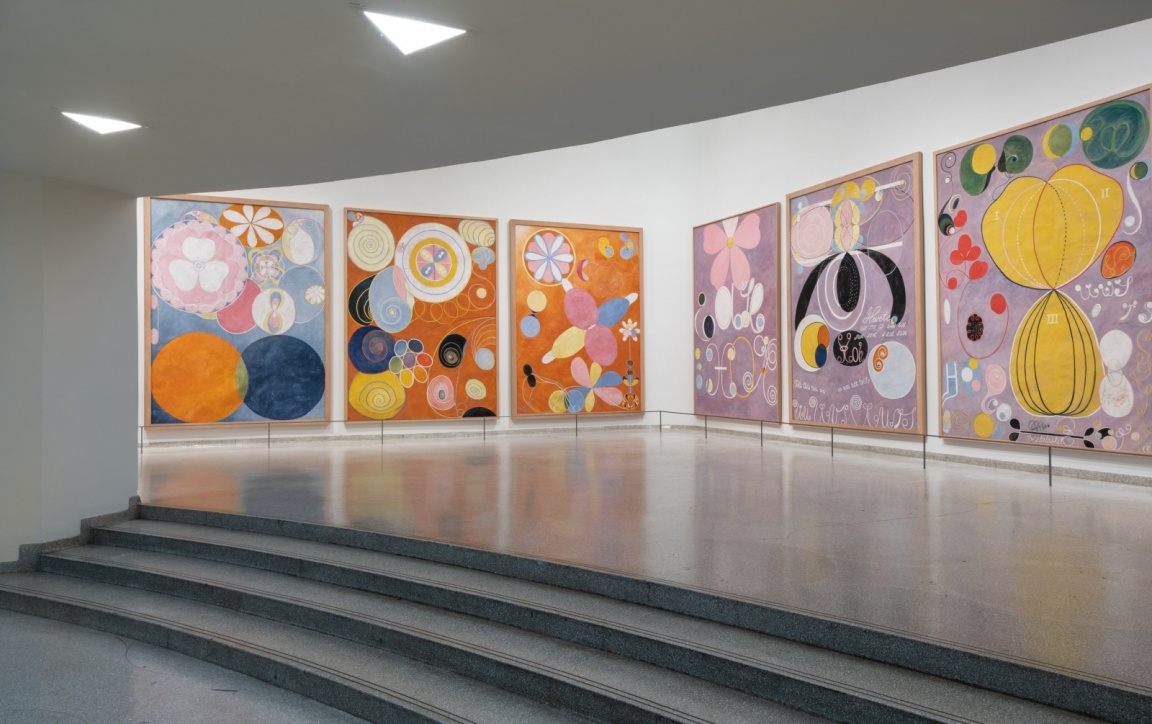 Hilma af Klint: Paintings for the Future, on view at the Guggenheim Museum in New York City through April 23, 2019

Who was Hilma af Klint, and what led her to pioneer some of the most formally daring, spiritually transformative paintings of the early twentieth century? Though it’s technically not part of the new retrospective at the Guggenheim Museum, a photo of the Swedish artist (taken in the early 1900s, when she was about forty years old) captures the creative tension at the heart of her work. Seated in a relaxed, upright posture, af Klint wears a serene gaze, her blond hair gathered behind her head and her thin lips joined in an enigmatic Mona Lisa smile. Her simple dark dress, layered over a starched white blouse with a tall collar, gives her an almost monastic, even priestly aura. But there’s a limit to her asceticism: from a cruciform metal broach on her neck hangs a wildly ornate lace cravat, its pulsating pattern evoking the curvy geometric forms that would soon fill her polychromatic paintings. It’s a traditional portrait of a lady, but also the portrait of a radically inventive artist, one who transcended her classical academic training to sound the secret depths of the divine.

Af Klint’s paintings are staggering in their novelty, but also deeply traditional.
sharetweet

Hilma af Klint: Paintings for the Future transforms the Guggenheim’s Frank Lloyd Wright building into what it was originally designed to be: not just an art museum but a “temple for the spirit.” Featuring more than 170 objects (mostly abstract paintings and drawings, but also pages from af Klint’s notebooks as well as samples of her early academic oils and late watercolors), the show, curated by Tracey Bashkoff, gracefully spirals up the museum’s ramps with the steady rhythm of a prayer. It is af Klint’s first solo exhibition in the United States, and it has already struck a chord with critics and museumgoers, earning glowing reviews and an extended run through April 23, 2019.

Audiences weren’t always so eager to embrace the mystery of Hilma af Klint’s singular art. Not only were her paintings rarely seen and never sold during her lifetime, but af Klint, suspecting that her contemporaries were unprepared to appreciate her oeuvre, even left instructions that it not be exhibited until at least twenty years after her death in 1944. Museums began showing a few works in the 1980s, but it’s only now that her moment has fully arrived. But rather than presenting her entire career, the Guggenheim retrospective centers on the years 1906 to 1920, when af Klint, inspired by “spiritual guides” (incorporeal authorities accessed through communal seances as well as private prayer and contemplation), completed an ambitious pictorial program entitled The Paintings for the Temple. Comprising 193 abstract works grouped into series of varying dimensions, the project was intended to adorn a multi-tiered circular sanctuary that would guide visitors from the fallen, changing world of matter into the eternal realm of pure spirit. 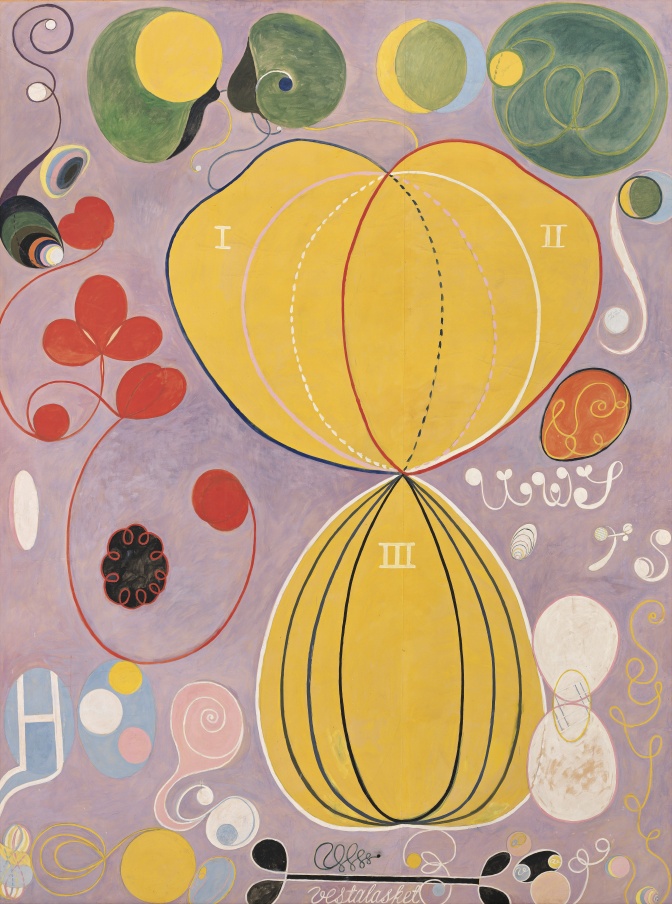 True to af Klint’s intentions, the show begins with a spectacular mystical flourish. Along the walls of the museum’s High Gallery are ten massive rectangular canvases (more than ten feet tall and eight feet wide, they’re simply called The Ten Largest), each replete with exploding pastel colors and oscillating geometric forms. As a series, they constitute a meditation on the human life cycle: the first two represent childhood, the next two youth, the following four adulthood, and the last two old age. As one’s gaze sweeps across the gallery, light blues and oranges give way to soothing purples and pinks; flower petals and baroque ellipses flow into dotted lines and nautilus spirals; an ornate script even fills a few canvases with invented words and Roman numerals. The paintings are staggering in their novelty—still more so when we consider that af Klint completed them several years before figures like Vasily Kandinsky and Piet Mondrian began experimenting with abstraction.

Yet The Ten Largest are also deeply traditional. The show’s catalogue explains that af Klint had a fondness for religious paintings, especially from the Italian Renaissance and Dutch Golden Age. Just as these works aimed to draw audiences beyond the painted surface and into prayer, so too does af Klint’s series point past itself into a fuller, richer whole. Along with purely abstract elements, we find symbols typical of religious art: patterns modeled on Swedish bonader (large-scale folk art paintings, often depicting sacred subjects), as well as a spinning mandala filled with the words “ave maria” (in the third canvas, “Youth”). The last painting (“Old Age”) even features a large white cross at the center, mimicking a gravestone. The more time you spend in front of the paintings, the more the shapes and colors start to mirror the unfolding process of human growth and decline. On the day I visited, I watched new mothers with brightly dressed infants posing cheerfully in front of “Childhood,” while elderly couples stood reverently before “Adulthood” and “Old Age.”

Much of the rest of the show is dedicated to illustrating the process of af Klint’s development as an abstract artist, highlighting her formal achievements as well as her evolving intellectual interests and expanding religious vocabulary. From her early work of the 1890s, we know that af Klint was a skilled painter of nature. Detailed drawings of insects and flowers, as well as striking portraits of two women, precede the “automatic drawings” that she began in the early 1900s, when together with a group known as “The Five” af Klint began tracing the geometric forms that she perceived during spiritual seances. During these practices, af Klint felt herself a conduit, a physical body possessed by spiritual entities (they even had names: Amaliel, Ananda, Clemens, Esther, Georg, and Gregor) that worked through her without any mediation. Fulfilling their “commissions,” af Klint completed her earliest abstract works, including the explosive WU/Rose Series (which illustrates how spiritual energy congeals into matter), the tender Eros Series (whose curves trace the tugs of desire), and the esoteric Evolution (which expresses af Klint’s growing interests in science, theosophy, and spiritualism). 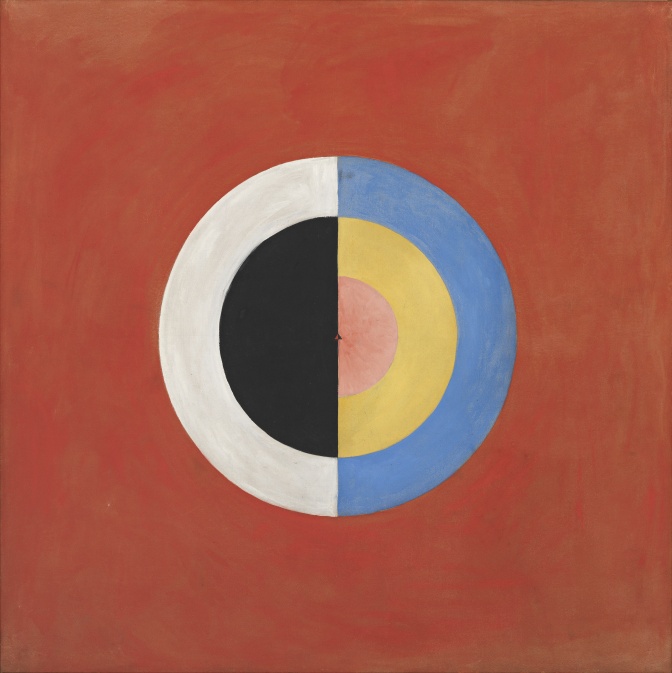 Soon she began to complement the forms she received from her spiritual guides with symbols taken from different religious traditions (especially medieval Christianity) as well as intuitions born of her own private reflection. Thus the Tree of Knowledge, saturated with earthy green and brown watercolors and stamped with gold leaf, provides a moving gloss on the Genesis story of Adam and Eve, while The Swan abstracts an alchemical symbol for the union of opposites into a mirrored progression of colors, circles, and triangles. Shifting from automatic drawings to this more personal mode of painting, af Klint makes a bold, if subtle, claim for the role of the artist—no longer a passive servant of the spirit, she is now an active co-creator with the divine.

The endpoint of this trajectory arrives near the top of the Guggenheim’s ramps, with a trio of extraordinary Altarpieces. Af Klint intended the triptych to occupy the central chamber of the upper floor of her proposed shrine, where visitors would at last experience the resolution of the dualities and tensions that fill the Paintings for the Temple. The museum honors her idea by setting the paintings in a relatively quiet, secluded space. In the canvas on the right, a triangular ladder, its steps colored like a rainbow, climbs through a black field to reach a radiant golden orb; in the painting on the left, another gilded sphere spins down a long black chute before disappearing into a small spiral whirlpool; in the central work, a metallic golden globe occupies nearly the entire field, a small six-pointed star resting at its center. Here, in a virtuosic display of abstraction, af Klint conveys her beatific vision, the union of humanity and divinity that even Dante struggled to articulate at the end of the Paradiso. 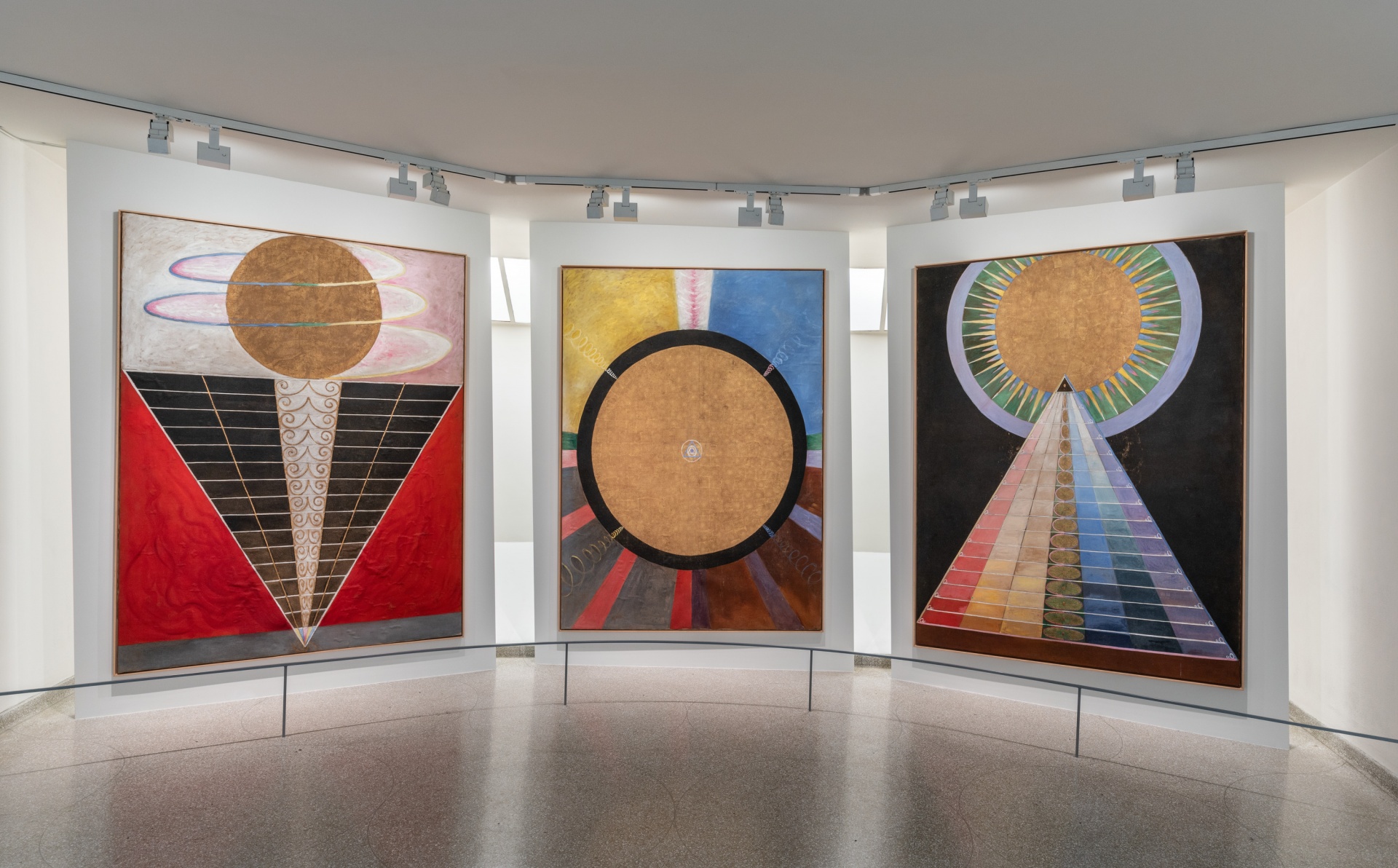 It’s become increasingly common to speak of art museums as “sacred spaces” where a disenchanted, secular culture can still experience something akin to religious transcendence. And for good reason. As the Trump era wears on, with its never-ending assault on political norms and social unity, cultural institutions have begun to rethink their public role, some casting themselves as hosts for difficult conversations and dialogue, others organizing exhibits implicitly (or even explicitly) critical of the current administration. But there’s a kind of false dichotomy that has crept into the discourse: all art, we’re told, is political, and if it doesn’t want to abet oppression and stand in the way of progress, it needs to take an unequivocally engaged stance. Such a view, as the Hilma af Klint show makes clear, is reductive: by reasserting the vitality of the spiritual in a divided secular age, the Guggenheim helps us to stand, however momentarily, outside the political fray. In the presence of Hilma af Klint’s quiet search for ever-deeper unities, we’re refreshed and empowered, ready to face the world with a renewed consciousness of our own God-given goodness.