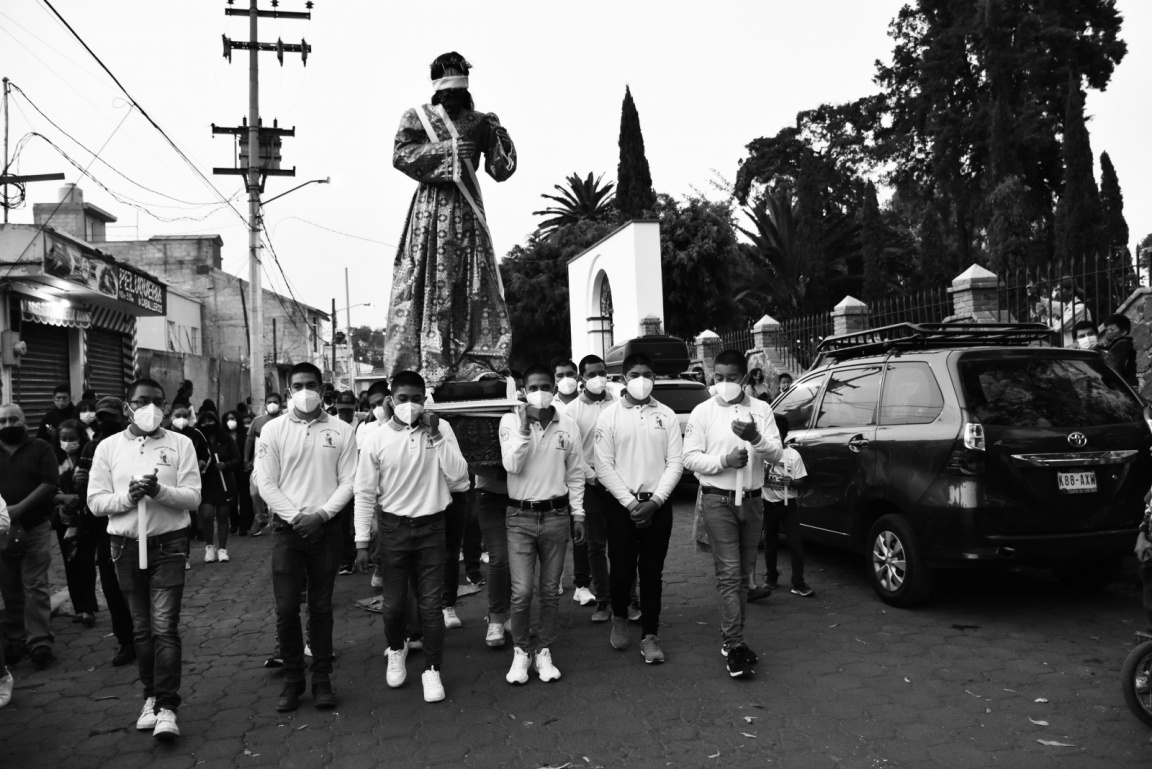 One of the most treasured traditions in San Gregorio Atlapulco, a pueblo of about 30,000 people in the southernmost part of Mexico City, is the celebration of Holy Week. Because of the pandemic, Holy Week events were canceled in 2020 and celebrated virtually in 2021. At several stages of the pandemic, San Gregorio recorded the highest number of Covid cases in Mexico City. Most residents know someone who died from it. “We lost many people,” Arturo Galicia Carrasco told me. “Parents, grandparents, friends.”

This year, despite fears of the new Covid variants, many people felt it was time to celebrate Holy Week in person once again. “Maybe it is not a good idea,” said Artemio Godoy Venancio, who owns a chair-and-table rental business near San Gregorio’s center. “But we have to return, little by little, to a normal life.”

These Holy Week celebrations are largely organized by a group of young men known as Los Varones. Before deciding what to do about this year’s celebration, leaders of Los Varones met with the parish priest. “We decided there were three options,” said Carrasco, a former Varone, “suspend it again, have it with the doors closed again, or about as normal.” Mexico uses a color-coded system to tell people what level of precaution to take against Covid. Red means the highest risk of infection, and correspondingly stringent restrictions. Green signifies low risk. “We decided that if Mexico was green, we could have Holy Week with precautions and changes,” said Ricardo Castro, one of the leaders of Los Varones. All of Mexico was declared “green” weeks before Holy Week and so the celebration proceeded as scheduled.

Not everyone agreed with that decision. Karla Manzanares Nieto, a photographer who has lived in San Gregorio her entire life, has documented life in the pueblo for years and has always attended the Holy Week ceremonies. But this year she had doubts. “I would like to go,” she told me, “but a lot of people are without masks, there is no social distancing, someone may want to talk to me.” Nieto is fully vaccinated but still contracted a mild case of Covid earlier this year. Her godfather died of Covid.

Still, the majority of San Gregorians wanted to celebrate in the usual, pre-pandemic way. Eduardo Gonzalez Morales, who works in the market adjacent to the local church, has his own misgivings—and takes his own precautions—but he thinks it’s time to return to the public events. “It is necessary because it is a tradition,” he said. 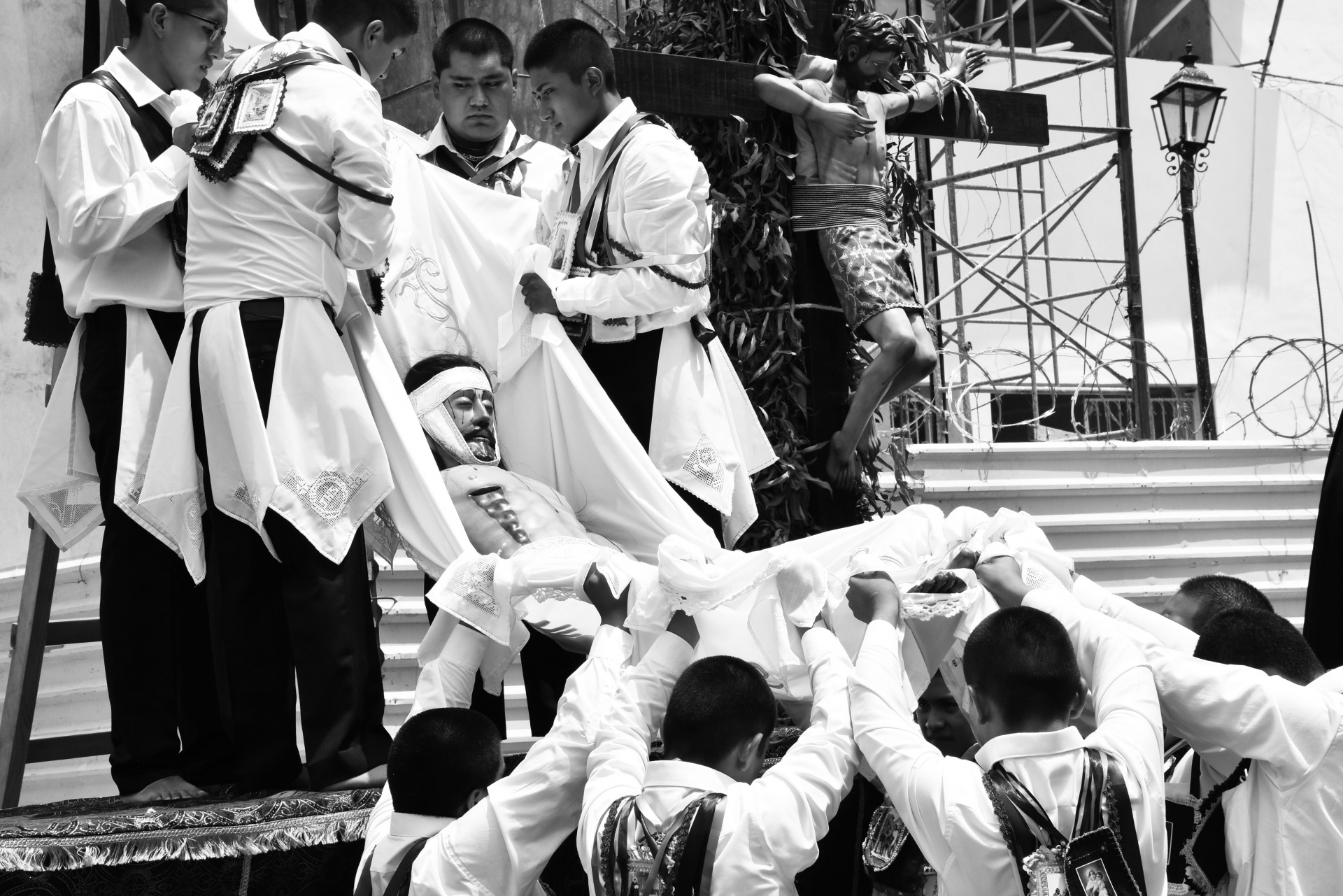 El Descendimiento, Good Friday: the two most senior Varones release and lower the figure of Christ from the cross (Joseph Sorrentino).

Los Varones trace their beginning to the Franciscan friars who arrived in San Gregorio in the late sixteenth century. “They were really the first Varones,” said Carrasco, who has collected oral history about the group. “Probably in the early seventeenth century, they started using young men from the pueblo.” Members of Los Varones must dedicate at least a year to serving the Church. In addition to the work they do during Holy Week, they’re required to clean the church, care for various religious statues, help people in need, and attend Masses and Bible studies. This year, there was one more requirement. “Everyone had to be completely vaccinated,” said Castro. “We are also using masks and we have antibacterial gel.”

In a normal year, thousands of people attend the pueblo’s Holy Week events, but this year changes were made to limit the crowds. “Things are starting earlier,” said Carrasco. “We are not telling people what time things start.” Those who wished to attend had to figure the schedule out for themselves.

On Wednesday of Holy Week, Los Varones and members of the community gathered in the church to decorate the altars with fruit. “The fruit represents the tears of the Virgin,” said Javier Márquez Juárez, who has written extensively about the pueblo’s traditions. He said that decorating altars with fruit is unique to San Gregorio. In past years, people wandered in and out of the church to watch the altars being decorated. This year, the church doors were closed.

On the evening of Holy Thursday people gathered in the churchyard for the start of the week’s first big procession. The yard has three entrances, but this year only one of them was open. Before entering, people were sprayed with disinfectant and given a dollop of sanitizing gel. A young woman at the entrance could be heard calling out to one man, “Señor, please wear your mask.”

At the start of the evening’s events, Los Varones carried statues of Mary and Christ out of the church and then stood silently next to them in the churchyard. A reenactment of the Last Supper is usually held on Holy Thursday, but this year it was canceled. So it was on to the next event: Los Varones carried the statues through the streets of the pueblo, accompanied by people singing hypnotically mournful alabados. A few local residents followed the procession or stood by to watch it pass. In a pre-pandemic year, there would have been crowds. Not this year. The whole procession took about three hours. Both Los Varones and the singers wore masks, as did most of those who followed them.

On the morning of Good Friday, carved figures of the two thieves and Christ were placed on crucifixes. At one o’clock in the afternoon, there was a brief liturgy, during which the priest reminded people to take precautions. Then came the descendimiento: the two most senior Varones climbed ladders to release and lower the figure of Christ from the cross. This alone took almost two hours.

The longest and most arduous procession of the week took place that evening. The figure of Christ was placed in a glass coffin covered with rose petals. Six barefoot Varones lifted the four-hundred-pound coffin, placed it on their shoulders, and carried it through the pueblo. This time efforts to limit the crowd were less successful: thousands of people followed the procession, and thousands more lined the streets. 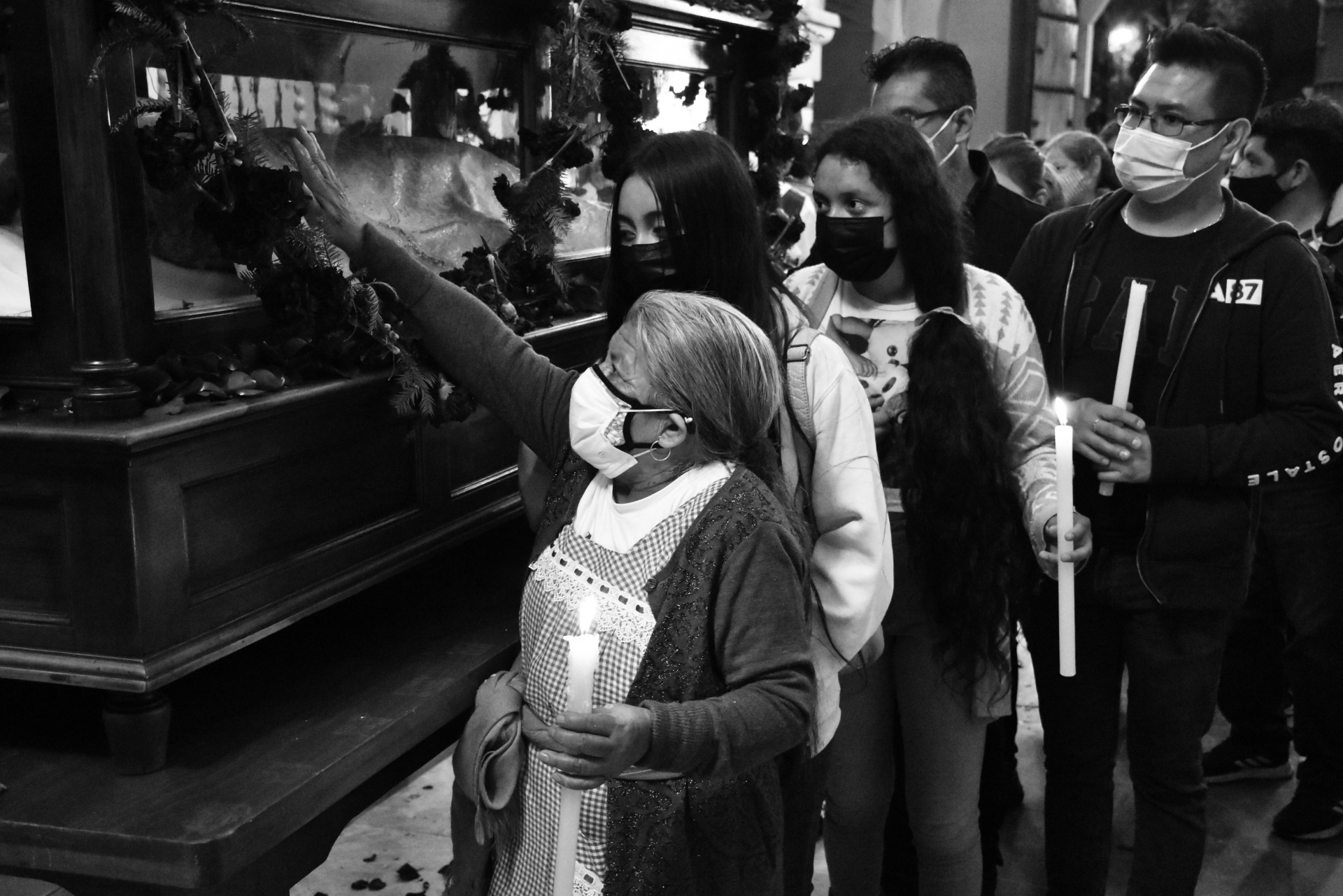 After the Good Friday procession, the coffin containing the figure of Christ is placed in a church and members of the community file past it for veneration (Joseph Sorrentino).

Like most of those people, Octavio Israel Flores Victorio wore a mask during the procession. He’s vaccinated and has already had a mild case of Covid. “I trust that if we take care of everything and are conscientious, we will be alright,” he said. “Holy Week is a tradition that is rooted in me. I cannot imagine San Gregorio without Holy Week.” Nearby, Márquez Juárez stood with his two young grandchildren. They wore masks; he didn’t. “I forgot mine,” he admitted. “But I am not afraid because the virus has evolved and is less dangerous. And I am vaccinated.” He said he wasn’t worried about his grandchildren getting Covid because they, too, were vaccinated and had both recovered from the virus earlier in the pandemic. “I wanted them to continue the tradition,” he said.

The whole procession took a little more than six hours and made stops at fourteen of the pueblo’s chapels. This year, only Los Varones and a few attendants were allowed to enter the chapels—after being sprayed with disinfectant. At the end of the procession, the coffin was placed in the church, and anyone wearing a mask was allowed to file past.

On Easter Sunday morning, the fruit that had adorned the altars was distributed and two Masses were celebrated. Attendance for the outdoor Mass was unlimited, but only 150 people, all masked, were allowed inside for the Mass celebrated in one its side chapels. Others gathered outside the chapel’s doors to listen in.

When the pandemic started in March 2020, the attitude in San Gregorio was, “No pasa nada.” Nothing will happen. The pueblo’s patron saint would see them through (see “San Gregorio Will Protect Us,” May 2020). It has taken a long time—and many deaths—to change their minds. “We realized the reality that God will protect us, as will the saints, but we have to take care of ourselves,” said Flores Victoria.

Like many other communities in Mexico, San Gregorio is still struggling to recover a sense of normalcy. And for this pueblo, life cannot be normal without a return to communal religious practices such as the Holy Week celebrations. “It is an event that means a lot for our pueblo,” said Castro, “It is an opportunity to be closer to the statues—and to be closer to God. When we are closer to God, we have more hope. We have the hope to keep on living.” 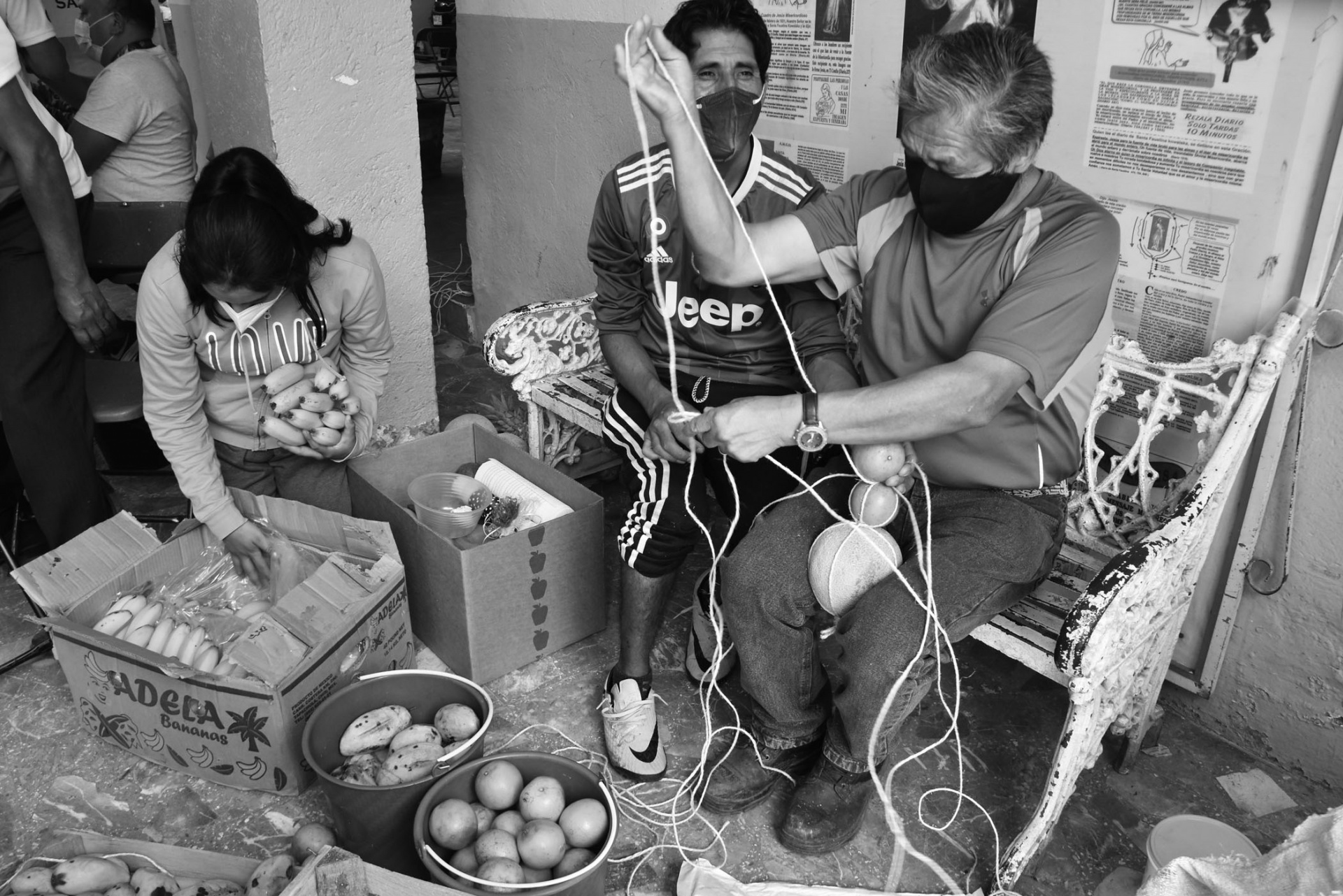