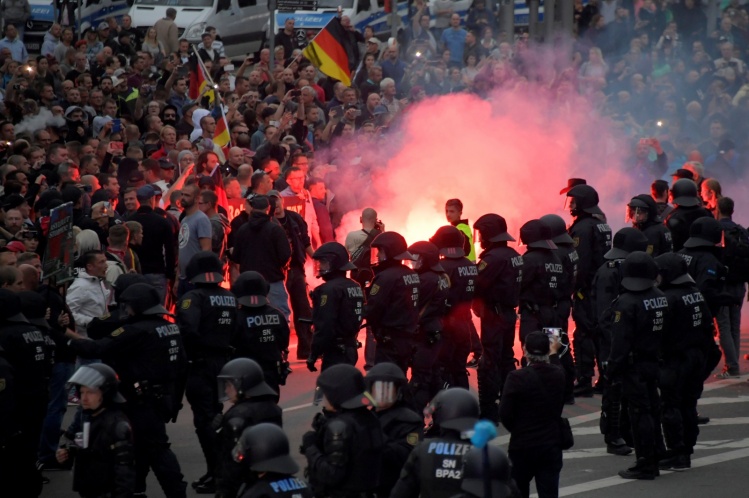 German riot policemen stand guard during a protest Aug. 27 in Chemnitz after a man was stabbed to death (CNS photo/Matthias Rietschel, Reuters)

In spring 2016, in a piece called “Germany, Eurabia and the End of Europe,” I looked at the backlash against the Merkel government’s acceptance of a million refugees from the Middle East—a backlash that spread through Eastern Europe, boosting nationalist and illiberal governments from Poland and Hungary to France, Belgium, and even Sweden. As I noted then, when Swedes engage in xenophobic violence, you know Europe is in trouble. As for Germany, the news magazine Der Spiegel described how things were coming to a head politically, spurring what the magazine called “a broad debate over Germany’s future.”

That debate has become steadily more rancorous. In late August, anti-immigrant fervor exploded in the German city of Chemnitz, ignited by reports that two immigrant asylum seekers—one Syrian, one Iraqi—had stabbed and killed a German. Chemnitz, known as Karl-Marx-Stadt when it was part of Communist East Germany, has seen neo-Nazi demonstrations before. But this time the crowd grew to thousands, and ordinary citizens joined in. Waving German flags, giving the Nazi salute—illegal in Germany—the demonstrators became a violent mob, overwhelming police and chasing down immigrants, several of whom were beaten. Fearful refugees described being “hunted like animals.”

The riot represents something new in post-World War Two Germany: an ominous joining of the far-right fringe to the mainstream. The linchpin of this phenomenon is the political party known as Alternative für Deutschland. AfD began as a kind of German Tea Party, opposing EU bailouts and agitating to restore the Deutschmark, and later became a vehicle for opposition to Merkel’s immigration policy. Last year the party won 27 percent of the vote in the eastern state of Saxony. And while the AfD officially distances itself from neo-Nazis, its incessant dog-whistling does the ugly work of normalizing the language of rightwing extremism. In the aftermath of Chemnitz, one of the party’s leaders waxed xenophobic in a tweet that went viral. “When the state can’t protect its citizens anymore, the citizens take to the street and protect themselves,” he said. “Today it is a citizen’s duty to stop the deadly ‘knife migration!’”

For seventy years the right-wing parties of postwar Germany have been fringe players, hounded by the government and shunned by the overwhelming majority of citizens. But the old rules no longer apply.
sharetweet

What is happening in Germany right now? The journalist and Tagesspiegel editor Anna Sauerbrey writes in a Times op-ed that “the country feels out of sync with itself, and with reality. We see things happening but cannot agree on what to call those things, or what they might mean.” Sauerbrey notes that where Angela Merkel called the protests a “hunt” against immigrants, Alexander Gauland, head of the AfD, blamed “three or four neo-Nazis” marring what were otherwise “legitimate protests.” And Hans-Georg Maassen, the head of Germany’s interior intelligence agency, pronounced himself “skeptical of the media coverage,” alleging that “well-directed misinformation” had managed “to divert public attention from the murder in Chemnitz.”

Fake news, in other words. Sauerbrey, noting the prevalence of the fake-news meme in American politics, calls this the first time in recent memory that a German government official has openly and without proof accused the news media of misinformation. “[W]hile the AfD has long campaigned against the ‘lying press,’” she observes, “such allegations from a high-ranking civil servant within the elected government are most likely unprecedented.”

The internet meanwhile continues to spew toxins into the public square. Germans searching YouTube for news about Chemnitz, the Times reports, find themselves “sent down a rabbit hole of misinformation and hate.” Zeynep Tufekci, a prominent researcher and writer about social media, warns that YouTube is well on the way to becoming “one of the most powerful radicalizing instruments of the 21st century.” In Germany that radicalizing involves building a forum for nationalistic views that had been marginalized by the German government and media. Take a look at this slickly produced video, put out by a group called the Identitarian Movement. The video records younger Germans expressing an aggrieved sense of national and ethnic pride. Some of their comments might seem innocuous to Americans (“We want a future, for us and our children”); but anyone familiar with the post–World War Two political landscape of Germany will find them unsettling. For decades, any overt expression of German ethnic, cultural, or national pride was considered verboten. Such self-censorship was a powerful reflex formed by the calamity of Nazi rule. History had shown how toxic patriotism could be, and Germans wanted none of it.

Now the lid is off; and the Identitarian video—made three years ago—is tame in comparison with more recent propaganda. A friend sent me a YouTube video showing the rant of an ostensible African refugee. Speaking to the camera in heavily accented German, he taunts Germans for their liberalism, and boasts of how refugees are exploiting the system. “You can’t do anything!” he cackles.

They pushed a woman down the stairs in the subway! They dragged a woman off her bicycle! The police can’t do anything. We are refugees here—we have lawyers who tell us what to do. Deportation? Won’t happen! Our home countries are unsafe, so you can’t send us back—ha ha ha! The money I get here as a stipend? I could never earn that in my own country—ha ha ha! Your men have no balls! I can spit on them, and they can’t do a thing about it!

And so on. It’s a nasty piece of incitement. Watching it, I could imagine how it would stoke the animus of those who represent the German equivalent of the “angry white male” cohort that turned out in this country for Trump—former East Germans who, three decades after the reunification, view themselves as having been marginalized and cheated by the dominant West Germans, and who readily vent their resentments against refugees.

Two years ago, in an op-ed titled “Will Merkel Pay For Doing the Right Thing?”, New York Times European columnist Roger Cohen asked rhetorically why Merkel—leader of a conservative party—would take on the huge political risk of accepting a million refugees. “Because she is a German,” Cohen wrote, answering his own question; “and to be German is to carry a special responsibility for those terrorized in their homeland and forced into flight.”

Are we seeing the end of that special responsibility? If so, it is a bellwether moment for all of Europe. For a long time, in Germany and elsewhere, the problem of cultural assimilation simmered away—surfacing in this or that hot-button topic, such as the hijab controversy in France or the travails of second-generation Turkish workers in Germany or the murder of Dutch filmmaker Theo van Gogh, and then subsiding. But now those contradictions are front and center, and they won’t easily be pushed back again. Instead, they pose what increasingly looks like an existential crisis for Europe. The Swedes, for now at any rate, have staved off a rightwing government; but the rightist party managed to come in a close third, with almost one in five voters supporting it, and the Times warns that the famously liberal country is “extremism’s next stop.” In an op-ed, Jochen Bittner, the astute political editor of the German weekly paper Die Zeit, describes Sweden’s lurch rightward as “the cost for ignoring the realities of mass immigration.” Bittner cites a kind of moral complacency, a liberal “self-satisfaction [that] justified a myopic approach to the very complex problem of how to integrate vast numbers of foreigners.” He clearly is referring to his own country as well as Sweden.

In Germany there is plenty of blame to spread around. A German friend tells me it was naive for the Merkel government to think it could handle a million applications for asylum. Added to that, he says, is widespread doubt about the legitimacy of some who are applying. “Many have no papers,” he reports, “and often one hears of false testimony about their ages, their country of origin, or the nature of the danger they are escaping. And every time an asylum application is refused, there’s a lawsuit. The courts are overwhelmed.” Newspapers meanwhile report daily on con men and pickpockets at German train stations, drug dealers in parks, sexual attacks on women—with the suspects invariably described as “foreigners” who speak “broken German.”

For seventy years the right-wing parties of postwar Germany (the Republikaner, the NPD, the DVU), have been fringe players, hounded by the government and shunned by the overwhelming majority of citizens. But the old rules no longer apply. About AfD and other rightwing parties, my friend believes that an important threshold in the German political discourse has been crossed. “For a long time, it was enough simply to call anyone who disagreed with the refugee policy a Nazi, racist, nationalist, or Islamophobe. But these expressions have been invoked so often that no one even winces anymore when they hear them.” There is now a critical mass of Germans who, while not as radical as AfD, have made common cause with the party to express their dissatisfaction. “They are willing to risk standing next to someone who’s doing the Hitler salute.”

Jochen Bittner calls for “a new force—one that takes seriously the need for realism on immigration and integration, without falling for the siren song of right-wing populism.” But that won’t be easy to achieve. The AfD and the radical right are likely to continue to blend, my friend predicts, and that will only amplify the polarization of German political life. “The fact that one of our two major parties, the SPD, has sunk to 18 percent of the electorate shows that there is no longer any social consensus about our national value system—and that bigger upheavals are possible. I don’t really want to invoke a Weimar-like situation, but I’m afraid that nothing good will come of where we are headed.”

There is little doubt that the resentments that exploded in Chemnitz last month reflect trends across Europe. And the bulwark that has long been Germany—penitent, pacifistic, profoundly liberal—is wobbling. Another German friend writes to tell me that she senses an ominous new energy afoot in the land. “I walk about these days with a very numb and sour feeling,” she writes. “Something is changing.”