Slaves Are Catching Our Shrimp

The Plight of the Rohingyas
By Sarah Ruden
Foreign Affairs 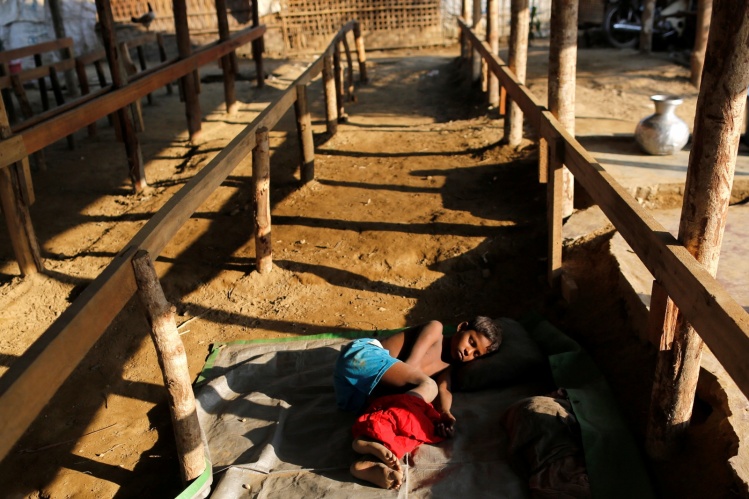 Someone emailed me yesterday to ask for my thoughts about something in the Bible that was puzzling her: What did it mean for God to have “hardened Pharaoh’s heart”?

I wished I didn’t have an answer ready. A few weeks ago, the editor John Wilson offered to let me review a book on the Rohingya Muslims of Myanmar for his new journal, Education and Culture. I eagerly accepted a copy of Azeem Ibrahim’s The Rohingyas: Inside Myanmar’s Hidden Genocide, thinking I could do an easy good deed by giving a little-known human-rights crisis some exposure. I put together a review, which was essentially an outline, according to Mr. Ibrahim’s excellent documentation, of the genocide already underway.

The Rohingyas have been settled for centuries within the borders of what is now Myanmar (formerly called Burma) and have lived mostly from traditional farming and fishing. But now, like the ancient Hebrews, they are caught between the alternatives of enslavement, annihilation, and impossible-looking escape over the water. They have lost so many human and civic rights that they can no longer really call their coastal region of Rakhine a homeland. Pogroms incited or orchestrated by Myanmar’s government drive them into concentration camps from which most aid organizations are barred. Médecins Sans Frontières stood its ground for treating Rohingyas and was expelled from Myanmar altogether.

From the camps, many Rohingyas are trafficked into the sex trade and forced labor in neighboring countries, particularly for the Thai fishing industry. On the fishing boats there is no one to witness their brutal exploitation. Meanwhile, recent mass graves found in Myanmar testify to the danger of staying in the camps.

In fleeing on their own, Rohingyas sensibly prefer to head by sea for Australia. But the Australian government has twisted its treaty obligations into a useless knot. Since claimants to refugee status have a right to material support and a hearing of their cases once they make landfall, the policy has been to bar them from the country, dumping them (along with other “boat people,” mainly economic migrants from elsewhere in Southeast Asia) on remote island camps under hired foreign jurisdiction, in conditions meant to serve as a warning and prevent further refugee flows.

In the meantime, there may still be hundreds of thousands of Rohingyas waiting in Myanmar for merciless ethnic and religious cleansing. More than a million were listed as “not enumerated” on the 2014 census. Long deprived of their unique community’s name and labeled “Bengalis” or only “foreigners,” they are now treated bureaucratically as if they had already died—or never been born in the first place.

Slaves are catching the shrimp we eat, and we either don’t know or don’t care.
sharetweet

It would be fashionable to blame the general obliviousness to this crisis on the Trump administration and its supporters, or on other isolationist or internationally disruptive actors. But in reality, in the era of democratic globalization—which is also the outstanding era of genocide—a whole lot of us are Pharaoh. Slaves are catching the shrimp we eat, and we either don’t know or don’t care. Our hearts are hardened.

The systematic exclusion and oppression of the Rohingyas began in the first half of the twentieth century, as a reflex of national self-determination. Burma emerged from colonialism with a dependent, underdeveloped economy and a majority religion, Theravada Buddhism, generally snubbed by British administrators, who preferred to work with Muslims. Some of the Muslims wanted self-determination too, and engaged in border insurgency in defiance of the new home-rule government.

The end of military rule after the multi-party elections of 2010 and 2015 energized the drive for power and payback against the Rohingyas. And the easing of Western sanctions brought in new, mighty dealmakers—multinational corporations that, in exchange for access to the country’s natural resources, would allow and excuse whatever political arrangements the new regime wanted. That regime had to find a new electoral issue to unify and win over the majority, whose rage and suspicion they themselves had cultivated during the decades of oppression. The broad international community was also complicit, despite its high-minded avowals about human rights, commemorations of past genocides, and solemn pledges of “never again.”

The way I myself didn’t arrive at any concern for the Rohingyas until now, though the leading expert on their plight had been right in front of me for months, forms a sordid and ironic fable in itself. After I finished writing my review of The Rohingyas, I wanted to know more about the author. Through a short web search, I learned about several of Azeem Ibrahim’s achievements, including that he had been a World Fellow at Yale University, where I was once a visiting scholar and instructor. “Wait a second,” I told myself. “Was he there in 2009?” That was the year I was at Yale, and I spent some of it bothering a woman named Muna AbuSulayman. She was the headline World Fellow that year, because Yale was seeking (and eventually got) a lot of money from her boss, the Saudi prince Al-Waleed bin Talal. The prince was the royal family’s chief propagandist abroad, scattering Salafist-friendly exhibitions and study centers among the most prestigious institutions. When AbuSulayman appeared among the economic-development, diplomatic, scientific, journalistic, and human-rights superstars in that World Fellows class, to explain the justice and humanity of the Saudi regime and to discuss her personal struggle for “life balance,” something in me snapped. I attended nearly every event at which she spoke. Participating in each question-and-answer period, I conveyed that I thought nearly everything she said was factually incorrect, ideologically shocking, or of no imaginable interest.

But the entire time, Azeem Ibrahim was sitting politely by among the other World Fellows, his presentations, like theirs, losing out to the sinister glamour of AbuSulayman and my hot-dogging challenges. I don’t know whether he was working on The Rohingyas already; it was not a topic I remember ever coming up—but if it did, would I have paid any attention? In the years since then, when I heard the few news reports of Rohingya massacres, it made little impression. Democracy was disappointing in one more country; there was plenty of corruption and violence; nobody seemed to be held accountable. South Africa, where I had lived during most of the first post-apartheid decade, was the same. What was there to do except hope that people would muddle through? They had to work things out for themselves, and the best we could do was to fight for our own values at home in the meantime.

But a genocide in progress—on a massive scale, organized, deliberate, in this case almost flaunted—cuts to the heart of those values. Are all of the world’s people not beloved children of God, as we are? Are their lives not equal in God’s eyes? How much more than nothing can we do to protect them? How much do we value, say, a cheap luxury like Thai shrimp? What if a local travel agency is running what amount to sex tours in a Pacific Rim country, putting teenage refugees’ bodies on the market? Will we take any action? What action?

Globalization comes with spiritual and moral duties. The early Christians could not have known whether a million people perished in China. And even if they had somehow known, they could not have done anything about it. But we now have elaborately organized commercial connections to almost the entire planet. Shared rules say exactly where the container ship full of socks or gardening tools can dock, how much interest is paid on foreign debt, where each executive sits at a conference. But we don’t have any effective international law against mass murder.

Would we shop or order lunch in a building with a gunfight going on in the basement, as long as we were confident of our own safety? And where would that confidence come from, if not stupidity? More importantly, what kind of moral or spiritual or intellectual life do we expect to have, if we don’t have the most basic law for the whole community we belong to? Millions of people really are in a state we can hardly imagine from our place in Pharaoh’s palace. We certainly can’t picture that in any alternative universe their sufferings would ever be imposed on us. They are beaten, raped, starved, worked to death, killed. We could help them if we cared to.

They are beaten, raped, starved, worked to death, killed. We could help them if we cared to.
sharetweet

In wondering what we could actually do, I thought of the difference that settled middle-class suburban life had made to my political influence. I don’t belong to the donor class, nor am I an activist; but if I’m horrified at some prospect (this year, it’s a proposed mountaintop-removal mine—yeah, right in a Connecticut town), I call the office of a certain powerful state legislator. He calls me back and promises that he and his colleagues will find a way—he doesn’t care what it takes—to prevent the worst-case scenario; he even spends a half hour educating me on the law and his strategy, and on how I can help. That’s the great glory of constituency: not just being aggrieved over a disaster or an abuse and passively demanding, consumer-like, that something be done; but instead participating the whole time, in the spirit of “It’s my community too, and I’m not going anywhere.”

As citizens of its member countries, we are all constituents of the United Nations. We can’t (yet) hold it as closely accountable as we’d like. But I emailed a friend, a human-rights law professor at the University of San Francisco, and she filled me in on avenues of approach—on ways that personal witness, such as a boycott of Thai seafood, might become community witness and impress powerful actors. I perked up the most when she told me this: “The Convention Against Genocide would require a state party to request the UN organs to take action to prevent and suppress the acts of genocide.” The United States could, with some effort, make things happen at the UN if we, as citizens and voters, insisted on it. So what would our excuse be for doing nothing?