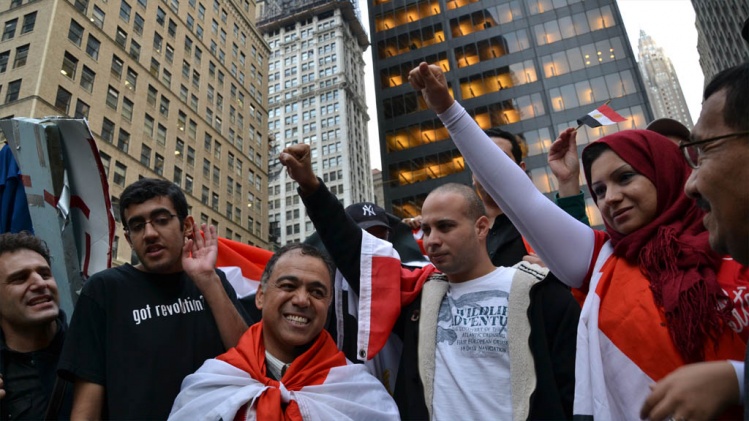 In 2009, a group of Harvard researchers made an accidental discovery. While building a computer program to read Chinese text, they realized that they were able to track what the Chinese government would censor and what it would not. First, they looked at social media posts that criticized the government or government officials; it seemed a natural place to start. But this wasn’t what was being censored. What really got the attention of China’s hundred-thousand censors was one word: “protest.” It isn’t the words that the Chinese government fears—it’s what the actions those words might enable.

Zeynep Tufekci, author of Twitter and Tear Gas: The Power and Fragility of Networked Protest, tells the story of these Harvard researches and many others to explain how words on social media turn into actions. Professor at the School of Information and Library Science at the University of North Carolina, Tufekci has participated in movements as various as the Zapatista uprising, the protests in Egypt’s Tahrir Square in 2011, Istanbul’s Gezi Park protests in 2013, and  Occupy Wall Street. She recounts the hopeful, almost giddy atmosphere at the beginning of the Arab Spring, and the possibilities opened up by technologies such as Twitter. “Activists were able to overcome censorship, coordinate protests, organize logistics, and spread humor and dissent with an ease that would have seemed miraculous to earlier generations,” she writes. “Thanks to digital technologies, ordinary people have new means of broadcasting—the potential to reach millions of people at once.” Moreover, the pervasiveness of cell-phone cameras has given private citizens the ability to document protests or violence and spread information instantly. The “traditional gatekeepers” of the media—newspapers, magazines, official state sources, etc.—lose some of their ability to dictate how protests should be understood.

Social media also have the potential to decrease “pluralistic ignorance,” the phenomenon of people being kept apart to ensure that they won’t unite and pose a threat to established power. Through Twitter hashtags especially, it’s possible to overcome feelings of powerlessness by connecting with people who think or feel as you do.

The ability to find a group of like-minded individuals almost-instantly changes the dynamic of any political movement. Today mobilization tends not to be directed from the top down by an organizing committee; rather, it is horizontal, becoming what thousands or tens of thousands make it. For example, during the 2011 Tahrir Square protests in Egypt, protesters were in desperate need of medical supplies. Ahmed Abulhassan, a pharmacology student who was not involved in the protests, created a Twitter profile, @Tahrirsupplies, and used Twitter’s “mention” function to engage activists. The new profile gathered information about needs and supplies in one place, coordinating suppliers and deliveries in real time. Tufekci emphasizes the novelty of this: an ordinary person, not a prominent activist or even someone with very many Twitter followers, was able to coordinate a global network.

An ordinary person, not a prominent activist or even someone with very many Twitter followers, was able to coordinate a global network.
sharetweet

One result of the use of social media is that the global networks forged online often remain in place, and can be quickly mobilized again. Tufekci describes this phenomenon as a “global antiauthoritarian protest culture.” Not only do people travel to participate in new or ongoing actions, but those dealing with one issue can share knowledge and resources with the politically sympathetic elsewhere. These networks allow groups continents apart to offer advice to one another. Palestinian protesters, for example, advised those demonstrating against police brutality in Ferguson, Missouri, on how to handle tear gas attacks.

Tufekci is quick to point out that technology is not inherently good, bad, or even neutral. Rather, “technology alters the landscape in which human social interaction takes place, [and] shifts the power and the leverage between actors.” She notes that although the horizontal nature of social media can be a solution to the problem of state- or elite-controlled media, it presents problems of its own. Millions of screens in millions of hands can create an information glut, making it difficult to sort out what is true or false. FAKE news, indeed.

Compounding this challenge is the nature of the algorithms used by sites such as Facebook and Twitter. Information is not presented chronologically, but displayed using difficult-to-understand formulae written by social media companies. When an algorithm promotes one already-popular post, other posts can be buried, regardless of their urgency or veracity. During the Ferguson protests of 2014, Facebook was algorithmically controlled while Twitter still displayed posts chronologically. Because information could not be buried on Twitter, word about the protests spread quickly throughout the world. Meanwhile, on Facebook, “it was as if nothing had happened.” As Tufekci reminds us, these social media sites are first of all businesses—their bottom line is acquiring users and gaining advertising revenue from page views, not advancing an ideological agenda.

Tufekci uses “signaling theory,” originally a biological term describing the ways living things send and perceive threats, to explain the unique character of contemporary protest. She compares the 1956 Montgomery bus boycotts to today’s demonstrations. Back then, building a movement took time and effort: flyers had to be photocopied, participants had to commit in advance, and face-to-face interactions were vital. As a result, strong networks were built, making it more likely that a movement would survive long-term. Contrasted to today’s short-lived, social media-inspired coalitions, there are definite benefits to the tedious work required in the pre-internet era. These differences, Tufekci claims, produce different “signals” to those in power. In a movement like the Montgomery boycotts, seeing thousands of protesters meant that there was a committed, powerful group that would not go away easily. Today, when a single tweet can draw a crowd, a protest means less.

Tufekci praises a “global anti-authoritarian protest culture,” diverse yet connected, that allows “common sentiment and connections to develop between a deeply religious Muslim woman and the defiant occupiers in Zuccotti Park despite starkly different beliefs about religion, family, modesty, and other issues.” But she seems to neglect a bigger question. What makes a protest “anti-authoritarian”? The feel-good nature of a big-tent political movement may well set up a movement’s failure down the road by obscuring real differences.

So how deep can these affinities go? If the current state of our politics and culture is any indication, not deep enough.