After Trump’s acquittal, Democrats need to get to work.
By The Editors
Donald Trump
Election 2020
Domestic Affairs 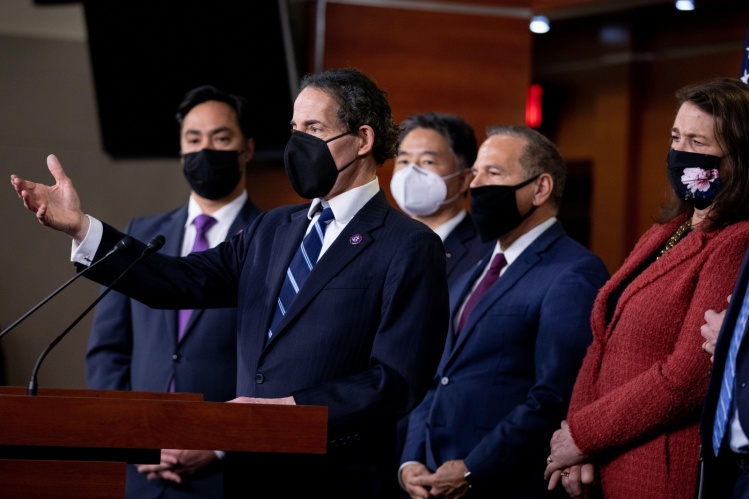 The Senate’s acquittal of Donald Trump for inciting the January 6 insurrection did not come as a surprise, but that doesn’t make it any less disturbing. Forty-three Republican senators stood with the former president, a shameful display that should puncture any delusions that the party would become more moderate after Trump left office. It confirmed, instead, the GOP’s ongoing radicalization. While Republicans already had only a tenuous commitment to democratic government—in recent years they’ve ramped up assaults on voting rights and grown ever more reliant on a strategy of minority rule—their support for conspiracy theories about election fraud was unprecedented. When they refused to hold Trump accountable for whipping up a violent mob to “stop the steal,” it was merely the latest indication of how far they would go to maintain their grip on power.

This does not mean it was a mistake for Democrats to pursue Trump’s impeachment. For days after the assault on the Capitol, there was no public briefing about what happened from government officials, and journalists were left to figure out what they could from witness statements, social-media posts, and information that trickled out from law enforcement. House impeachment managers provided by far the most complete account we have of the riots—a precise timeline of events that irrefutably connected Trump’s words and deeds to the actions of the mob, especially his speech outside the White House immediately preceding the insurrection and his tweets as it occurred. The video presented by Rep. Jamie Raskin, which spliced together damning footage of Trump with clips—some previously unseen—of what happened inside the Capitol, offered frightening proof of just how serious the president's supporters were in using deadly violence to meet his aims. That alone was a genuine service to the country.

After the trial concluded, Senate Minority Leader Mitch McConnell admitted, “There is no question that President Trump is practically and morally responsible for provoking the events of that day.” It was a very strange thing to say after voting for acquittal. McConnell justified his vote by appealing to a narrow definition of incitement and a belief that impeachment should be used only to remove someone from office, but his comments are best understood as proof that nothing could have changed his mind—let alone the minds of his colleagues. No brilliant, unpursued strategy existed that would have magically persuaded Republicans to abandon Trump. As Raskin later said, “There's no reasoning with people who basically are acting like members of a religious cult.”

The GOP’s fanaticism shouldn’t obscure the fact that Democrats still do not seem to grasp the urgency of this political moment.
sharetweet

Raskin was right, but the GOP’s fanaticism shouldn’t obscure the fact that Democrats still do not seem to grasp the urgency of this political moment. Take the fiasco over calling witnesses during the Senate trial. On the night before its final day, Republican congresswoman Jaime Herrera Beutler released a statement about the details of a phone conversation between House Minority Leader Kevin McCarthy and Trump while rioters ransacked the Capitol. McCarthy divulged to her that he had asked Trump to call off the mob—only for Trump to say that he couldn’t because they were left-wing activists. When McCarthy protested, Trump replied, “Well, Kevin, I guess these people are more upset about the election than you are.” Herrera Beutler’s revelations brought new enthusiasm for deposing witnesses, with her first on the list. As reported by Politico, Democrats debated the possibility late into the night. The next morning, the Senate voted to allow witnesses. Trump’s lawyers responded by threatening to drag the proceedings on for weeks or months, and confusion reigned. Ultimately, no witnesses testified—and not just because a number of Democrats were hesitant to extend the trial. House managers never had a real plan for such a possibility, it turns out—a stunning misstep—and they eventually settled for a compromise: Herrera Beutler’s statement would be read into the record. The trial concluded later that day.

The wisdom of that compromise can be debated. Though it’s unlikely Trump administration officials actually would have testified in a timely manner, and though there was little chance new evidence would have swayed any Republicans, we might have learned more about what happened on January 6. Not calling witnesses came with a cost. But the best argument against doing so was that Democrats needed to get on with the people’s business. Millions of Americans desperately await pandemic relief; cabinet appointments remain unconfirmed. Incredibly, that’s not what happened after the trial ended. Rather than immediately taking up vital legislation, the Senate went into recess for a week. “The jury is ready to vote,” Democrat Chris Coons reportedly said during negotiations over calling witnesses. “People want to get home for Valentine’s Day.”

It’s possible that Trump could still face justice. The NAACP has filed a lawsuit on behalf of Rep. Bennie Thompson of Mississippi, claiming that Trump’s role in the insurrection violated the Ku Klux Klan Act, an 1871 statute that, according to the New York Times, “includes protections against violent conspiracies that interfered with Congress’s constitutional duties.” And prosecutors in Fulton County, Georgia, have begun a criminal investigation into a phone call Trump had with Georgia Secretary of State Brad Raffensperger, during which he pleaded with Raffensperger to “find” the votes he needed to win. Whatever the outcome of these efforts, Democrats need to deliver on the promises they campaigned on, and soon. There can be no doubt that Republicans, for their part, will say anything, do anything, and tolerate anything to regain power.

What to read this weekend?