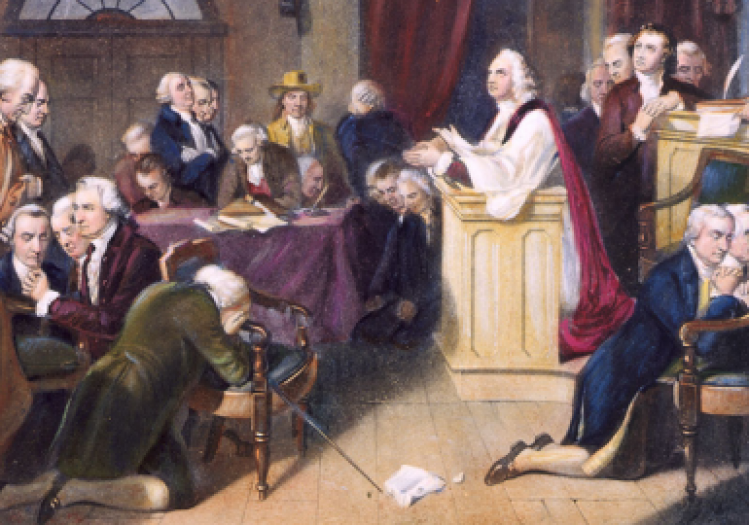 It has long been the tradition of American citizens to pray for divine blessing and guidance in their civic business. This tradition, which predates the founding of the American Republic, finds expression at all levels of government, federal, state, and local. It was embraced by the First Continental Congress, the same Congress that both employed a paid chaplain and later drafted the First Amendment to the U.S. Constitution; it was maintained during the passage of the Fourteenth Amendment; and it persists in various guises to this day.

By and large, the language of American civic benedictions—monotheist, biblically inflected, vaguely Protestant—reflects the country’s Christian history and the religious convictions of a large, even if diminishing, segment of its population. The ritual generally consists of a prayer or petition for the blessings of God -- or the Almighty, or Providence, or the Heavenly Father -- in discharging the deliberative functions of government. Sometimes the prayers are distinctly Christian, invoking Jesus Christ; at other times they are vaguely Christian; and sometimes they are not Christian at all. These petitions, which commonly include acknowledgments of fallibility accompanied by supplications for the wisdom to do justice and the protection of the citizenry, have been assigned the label “legislative prayer.” But the civic invocation of divine benediction is a much broader American phenomenon, encompassing Thanksgiving Proclamations, presidential addresses, religious displays on government land, national days of prayer and fasting, and so on.

Legislative prayer is the subject of the latest religion-clause challenge to reach the U.S. Supreme Court, Town of Greece v. Galloway, a case brought by two plaintiffs, one atheist and one Jewish, who claim that the legislative prayer practices of a small enclave in upstate New York are unconstitutional. The prayers selected by the municipality have been nearly uniformly Christian, and a lower court judged both the town’s selection practices and the content of the prayers too consistently Christian to pass muster under the Establishment Clause, which proscribes laws “respecting an establishment of religion.”

Evaluated by the conventional materials of constitutional adjudication—constitutional text, historical practice, and legal precedent — Town of Greece might seem a relatively easy case. Going back to the first Congress that drafted the Establishment Clause, the practices comprising legislative prayer were never thought to constitute laws respecting an establishment of religion. Thirty years ago, in Marsh v. Chambers (1983), the Court ruled that the legislative prayer practice of Nebraska’s state legislature — in which for sixteen years a publicly funded Presbyterian chaplain delivered prayers containing, as Justice William Brennan put it, “Christological references”— was constitutional in light of the “unambiguous and unbroken history” of the tradition of legislative prayer dating from our nation’s founding. Marsh held that as long as the government is not “proselytizing” or “advancing” religion — that is, attempting to convert citizens or putting its coercive authority behind a particular faith — legislative prayer is constitutionally permissible.

Resolution of the case has been complicated, however, by a well-meaning but errant doctrinal byway that the Court has fitfully pursued since the mid-1980s. In response to complaints about the display of religious symbols on government property, several justices began to inquire whether the government had “endorsed” religion in such a way as to cause political offense or estrangement. Yet since the government makes something of a habit of saying offensive things, the Court needed a limiting principle -- and so it decided to consider only the ostracized sentiments of a hypothetical “reasonable observer.” That approach — in which the Court purports to distinguish between reasonable and unreasonable offense — has generated considerable consternation, a point Justice Elena Kagan acknowledged at oral argument. The lower court in the case seemingly extended the endorsement test to the issue of legislative prayer, but it does not appear likely that the Supreme Court will follow suit. Instead, oral argument zeroed in on other possible standards — the distinction between “sectarian” and “nonsectarian” prayer, for instance, or the question of legal coercion.

The best argument for the unconstitutionality of this particular legislative prayer practice concerns the issue of coercion. The plaintiffs’ lawyer, Douglas Laycock, argued effectively that the Greece town council -- unlike the Nebraska legislature in Marsh -- is not a purely legislative body, since it exercises various administrative and other functions. Citizens who appear before it are seeking specific outcomes—zoning variances, changes in school policies, and the like – and may be placed in the awkward position of showing the prayer practice an unwanted respect, or perhaps even of participating in it, in order not to prejudice their claims before the council. A core function of the Establishment Clause is to prohibit government from imposing religious doctrine on the unwilling. Citizens should not be coerced by the state to act in ways they find religiously objectionable.

Yet this argument faces several obstacles. First, though the Court in Lee v. Weisman (1992) recognized psychological coercion as constitutionally problematic in the context of a middle-school graduation prayer, it would need to extend the concept considerably; adult citizens with business before the town council, unlike middle-schoolers, are not required to attend the legislative prayer, which moreover occurs some time before the council considers the matters before it. Second, if the Court were to extend the psychological coercion approach to this context, it is difficult to see why various court practices—in which attendees are instructed to rise as a marshal announces, “God save the United States and this honorable Court”—are not similarly coercive to those with business before the court. Third, hybrid governmental bodies are quite common, and a standard that required judges to discern between purely legislative and quasi-legislative bodies would be difficult to administer and might appear arbitrary. Finally, local legislative bodies have been seeking divine benediction for centuries. For all these reasons the non-funded, volunteer prayers in Greece, New York, seem to fall within Marsh’s general rule.

THE LIKELIHOOD THAT the Court will reaffirm Marsh wholesale is uncertain, however, in part because the Court—and Justice Anthony Kennedy in particular—seemed frustrated by Marsh’s historical approach. How, Kennedy inquired, can the mere existence of a tradition be its own justification? What if the tradition turns out to have been a “historical aberration,” one lacking a “rational explanation”? Whatever its status as a moral justification, pastness alone may well be a constitutional justification. Evidence of past practice and understanding is relevant to the meaning of the Establishment Clause and legislative prayer’s consistency with it. Furthermore, characterizing the justification for the tradition of legislative prayer as a historical accident, or as a brute assertion that “we’ve always done it this way,” implies that the many generations of Americans who engaged in the practice for centuries had no reason at all to do so -- or that their reason must have been the impermissible one of declaring the superiority of Christianity above all other religions.

But in fact they had other reasons. Civic benediction is an acknowledgement of the limits of government, and of its perpetual capacity to do wrong. To seek divine guidance and protection in the civic context is to recognize that government is imperfect and fragile, and that human power — even when exercised thoughtfully and with beneficent intentions— can fail to do justice. At one point in the oral argument, Justice Kagan rightly observed that “when we relate to our government, we all do so as Americans,” not as religious or non-religious individuals. That is true, and legislative prayer is part of that American heritage. It is a mechanism for citizens to acknowledge these limitations—personal and systemic—before they make law and set policy.

Admittedly, these are not beliefs everyone shares; atheists no less than religious persons may be confident that the government can provide, and ought to provide, perfect justice. But they are beliefs that lie embedded in American constitutional governance. When the Preamble of the Constitution sets out the People’s aspiration to form a “more perfect Union,” that is a tacit civic affirmation that the Constitution is not perfect now and can never be made so. As the work of human hands, it is inherently imperfect, for if it were perfect, neither it nor the Union itself would ever change. But they do change, by the illumination of resources outside themselves. A primary function of legislative prayer has always been to express humility about government’s powers—uncertainty about its judgments—and to affirm the separation of the realm of politics and law from whatever realms lie beyond it. The reasons for exploring the long, unbroken historical tradition of legislative prayer recognized in Marsh relate not to the might of religion, but to the tragic weakness of government. Legislative prayer thus reflects an understanding of the separation of church and state—an acknowledgment of distinct jurisdictions of authority and truth. And this is the sense in which history can be a guide to the future.

It may be that Americans today no longer perceive legislative prayer in these terms—perhaps due to increased religious pluralism, or to the attenuation of compatriotism and civic fellowship, or to the growing sense that government is indeed the sole available source of justice and ought to achieve nothing less than perfect law. And so we should be cautious about the uses of legislative prayer, and ready to question its political wisdom. But recognizing the independent spheres of government and of what lies outside it reflects an ancient yet supple reason — one rooted in American legal tradition—for upholding the constitutionality of this practice.