Title 42 and the border
By Isabella Simon
Immigration
Joe Biden 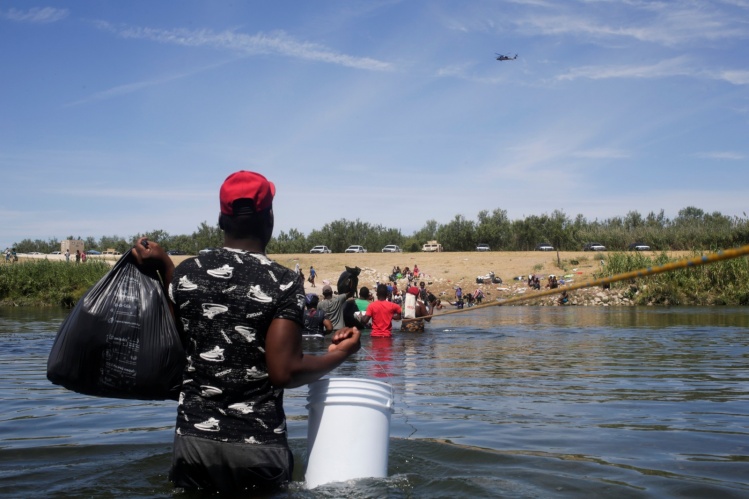 Images of horse-mounted border-patrol agents in Texas driving Haitian migrants toward the Rio Grande in September rightly horrified the world and embarrassed the Biden administration, which denounced the tactics and insisted “this is not who we are as a country.” But in fact this is just what our country must be willing to countenance as long as we continue our policy of turning desperate people away at the border before they have the chance to apply for asylum.

Legally, anyone seeking asylum in the United States has the right to enter the country and apply for it. The Biden administration, like the Trump administration before it, has flouted this long-standing provision by citing the threat of Covid and invoking Title 42, which permits the United States to stop travel at the border to prevent the spread of communicable disease. Many people, including the top doctor at the CDC, say it has had little effect on public health and is really nothing but a pretext for enabling easy deportations. And on that count, it has proven highly effective. So far, the Biden administration has used it to deport seven hundred thousand people, including asylum seekers and migrants more broadly.

Summary deportation makes it easy for Americans not to think about the people being sent back to the places they had sought to escape.
sharetweet

Summary deportation makes it easy for Americans not to think about the people being sent back to the places they had sought to escape. But people don’t just “go away” when they’re put aboard a plane or bus. Migrants held at or returned to the Mexican side of the border, for example, are at high risk of being robbed or physically or sexually attacked, and are also vulnerable to kidnapping and extortion by gangs (the court-mandated reinstitution of the “Remain in Mexico” policy, which President Biden had discontinued, will only exacerbate this problem). Many of the thousands of migrants who had gathered in the town of Del Rio in September were eventually deported to Haiti—some who’d originally fled after the 2010 earthquake, others seeking refuge from the unrest following this summer’s earthquake and the assassination of President Jovenel Moïse. Secretary of Homeland Security Alejandro Mayorkas claimed that, despite these dire circumstances, “Haiti is in fact capable of receiving individuals.” The decision prompted the resignation of Special Envoy for Haiti Daniel Foote, who explained that “the collapsed state is unable to provide security or basic services, and more refugees will fuel further desperation and crime.”

President Biden has talked a lot about making our immigration policies more humane and increasing funding for immigration services, but the use of Title 42 belies these promises. Furthermore, it’s a tacit admission by the administration that our immigration system, with its inadequate infrastructure and extensive backlog, is too broken to cope with the influx of arrivals. Unfortunately, comprehensive immigration reform is probably a long way off. But there are approaches that could be tried in the meantime. According to immigration aid and advocacy groups like the Hope Border Institute and Human Rights First, “faith-led organizations, humanitarian groups, legal services organizations, and other volunteers stand ready” with more than two thousand shelter beds available in the El Paso–New Mexico region. As of July, less than 10 percent of that capacity was in use. Given the fact that “the vast majority of migrant families and adults stay within the border shelter network for only 24 to 72 hours before traveling to other parts of the country,” these facilities could accommodate thousands of new migrants each week. Programs like these can’t substitute for meaningful federal policy, but the Biden administration could be more forthright in seeking such partners. They’re out there. Even small steps like these would be better indicators of who we’d still like to be as a country.