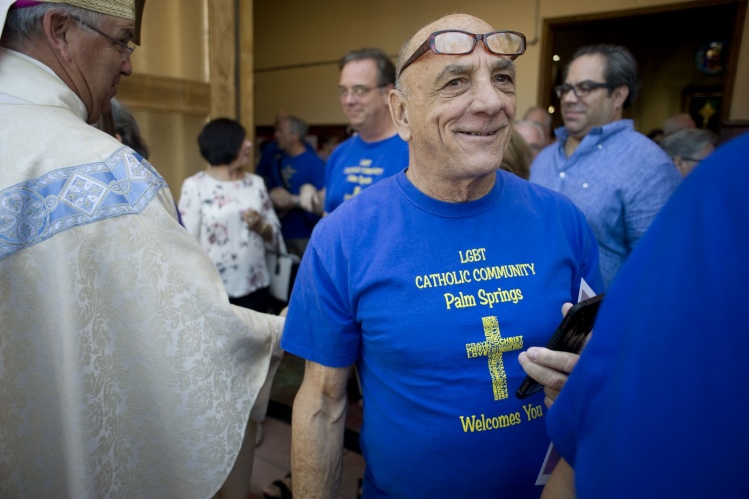 A member of a delegation from the LGBT Catholic community in Palm Springs, Calif., smiles after being greeted by Auxiliary Bishop John P. Dolan of San Diego following Mass October 7 at St. John the Evangelist Church in San Diego. The Mass marked the 20th anniversary of “Always Our Children,” a pastoral message to families with LGBT members from the U.S. bishops' marriage and family life committee. (CNS photo/David Maung)

Last week’s firing of a first-grade Catholic school teacher who married her same-sex partner again raises the question of whether Catholic institutions are selectively enforcing the church’s sexual ethics in ways that unfairly target gays and lesbians. As these firings become increasingly common, Catholic leaders must acknowledge the deep wounds they are causing to people who love and serve the church. A more prudent, and ultimately, more Christian, response is needed in these complex cases.

Jocelyn Morffi worked at Sts. Peter and Paul School in Miami for seven years, and ran a volunteer organization that takes students around the city on weekends to distribute meals to the homeless. “They treated her like a criminal,” Cintia Cini, a parent, told the Miami Herald. “They didn’t even let her get her things out of her classroom." At least eighty  people have been fired from Catholic institutions in similar cases, according to New Ways Ministry, an organization that works to build bridges between LGBT Catholics and the church.

The response from school officials in these cases is usually framed simply. Teachers know the church’s teaching on marriage, and as employees of a Catholic institution they are expected to live in adherence to doctrine. When a teacher or other school employee publicly defies that teaching, the action causes—in the language of moral theology—“scandal” to the faithful. Let’s pause for a brief moment to reflect on that word. In this context, perhaps it’s not the best vocabulary for an institution that created its own scandal through its handling of the sexual abuse crisis. Scandal is also a more complicated theological concept, as Christopher Vogt, a professor of theology and religious studies, explains in a chapter he contributed to a new book, The Bible and Catholic Theological Ethics.

Vogt points out that Thomas Aquinas “makes the important observation that scandal sometimes can be caused by the malice of the scandalized.” The Pharisees were scandalized by Jesus because, as Vogt writes, “their sense of certainty regarding the Law and what constituted holy living and sinfulness made it impossible for them to respond to God’s invitation in Christ.” The scandal of Jesus was not only that he offered a challenging message. “Jesus and his disciples engaged in behavior that many people regarded as morally offensive and wrong,” Vogt continues: “Jesus became an offense or scandal by challenging individuals’ most cherished beliefs and violating their assumptions about the way the world should be.” He sees parallels in the mistakes of the Pharisees and some responses to contemporary debates over same-sex relationships, including the firing of gay employees at Catholic institutions.

“An understanding of scandal more fully informed by the New Testament should lead us to ask whether the phenomenon of gay men and women promising loving, lifelong commitment to each other should be an occasion for Christians to be scandalized in a very different sense: of seeing long-held certainties unexpectedly overturned by the living God. This is not a call to retreat into moral relativism. It is a suggestion that punitive actions against gay men and women by principals, pastors, and bishops are inconsistent with Christian charity, are likely to cause “opposite scandal,” and do not reflect the fact that we are at a moment that requires prayerful discernment.”

The question of whether Catholic institutions should fire gay employees who are civilly married should also be contemplated in light of the increasingly robust debate in the church over how to respond more pastorally to LGBT people. Bishop Franz-Josef Bode, the vice president of the German bishops’ conference, has called for thoughtful discussion on whether Catholic clergy should bless same-sex civil unions. “I’m concerned with fundamental questions of how we deal with each other; although ‘marriage for all’ differs clearly from the church’s concept of marriage, it’s now political reality,” the bishop said in January. “We have to ask ourselves how we’re encountering those who form such relationships and are also involved in the church, how we’re accompanying them pastorally and liturgically.”

In the United States, Bishop John Stowe of Lexington, Kentucky told a national gathering of LGBT Catholics last year that “in a church that has not always valued or welcomed your presence, we need to hear your voices and take seriously your experiences.” Newark Cardinal Joe Tobin welcomed a pilgrimage of LGBT Catholics at the Cathedral Basilica of the Sacred Heart. Bishop Robert McElroy of San Diego has suggested the church needs to stop using language such as “intrinsically disordered” to describe sexual relations between gay people. In an interview with America magazine, he described that terminology as “very destructive language that I think we should not use pastorally.”

There have always been gays and lesbians working in Catholic schools and parishes. But as support for gay rights and same-sex marriage became widespread, Catholics who once hid their sexuality and relationships now feel less compelled to live in the shadows. Even so, LGBT Catholics today are trapped in what Fordham theologian Rev. Bryan Massingale calls “the open closet.” Catholic institutions offer “private toleration” for gays and lesbians, Massingale said last year in a speech, but once same-sex relationships become public, these Catholics risk stigma, condemnation, and losing their jobs. Massingale finds this paradox deeply flawed. “Justice is inherently public,” he said. “Justice is the social face of love.” Along with this disconnect, gay Catholic employees have their lives subject to moral scrutiny in ways heterosexual Catholics do not. Straight Catholics are not fired for using contraception, for example, or having sex before marriage. This selective policing of behavior and disproportionate response to gay employees who are not living in full accord with church teaching leaves Catholic institutions open to criticism that homophobia plays a larger role in these decisions than is ever acknowledged.

Catholic schools have every contractual right to fire teachers who are in same-sex marriages. But failure to discern a different, more pastoral response will only continue to privilege a culture of exclusion over a culture of encounter, leaving Catholic officials to stumble in explaining why rigid religious legalism—rather than justice—is the essence of Catholic identity.