'Scalia: A Court of One' 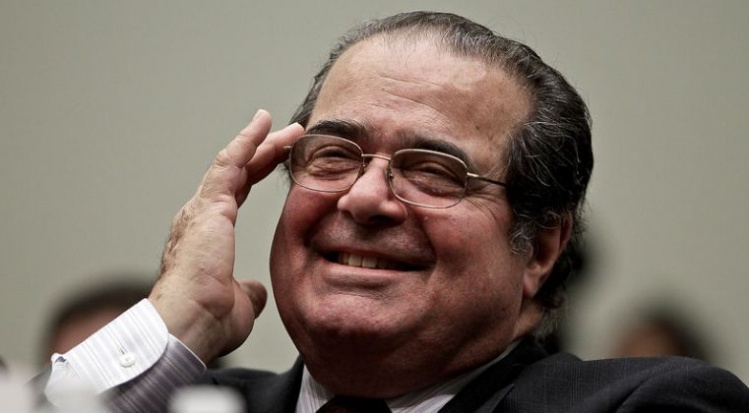 One of the most famous stock characters in Italian commedia dell’arte is Pulcinella—the “Punch” in “Punch and Judy.” Pulcinella is self-centered, cruel, a picker of fights. He’s the villain you love to hate. Every show needs one. Which brings us to Supreme Court Justice Antonin Scalia. Like Pulcinella, Scalia is, for many liberals, a villain fit for the stage of his beloved operas: cunning and mean, larger than life, and almost always wrong. He has his champions too, of course. For them, Scalia’s ideas, his coruscating opinions on and off the bench, and his joie de vivre have become iconic. Commenting on her recent, widely read New York magazine interview with Scalia, Jennifer Senior captured those polarized views in describing why “the left and the right both responded so enthusiastically to this piece. Each side sees its own views affirmed. One sees a monster and the other sees a hero."

These lines are quoted near the end of Bruce Allen Murphy’s new biography, Scalia: A Court of One. Had the book opened with them, it could have been much better. The book feels exhaustive, although “exhausting” is more accurate. It makes two or three good points that should not be forgotten in the face of the stringent criticisms the book has received on the right. But those aren’t original points, and the conservative reviewers are mostly right about this book. In the end, it offers us a better view of Scalia’s press clips than of Scalia himself.

The book’s useful observations are summarized in its subtitle. Scalia has been a singular force on the Court. His views on statutory and constitutional interpretation have changed the terms of debate on and around the Court. Because of Scalia, statutory interpretation is more text-driven. Originalism—once a search for the “original intent” of the Constitution’s drafters, now mostly Scalia’s preferred method of looking to the “original public understanding” of the Constitution’s text at the time it was ratified—is, if not the dominant method of constitutional interpretation, at least the one against which others are measured. Former Justice John Paul Stevens’s lengthy dissent to Scalia’s opinion in Heller, the case holding that the Second Amendment confers an individual right to bear arms for, among other things, self-defense purposes, was an originalist dissent. Scalia’s methods and their consistency, his politics, and his views on individual cases can be disputed. His influence cannot.

Murphy’s subtitle also captures the “lion in winter” air around Scalia these days. Our public values and leading political issues, as well as the main currents of thought both on the Supreme Court and in the Catholic Church: all have changed since Scalia’s appointment. Younger legal conservatives, including his colleagues, treat him as a forebear, not a leader. Warm in person but cutting on the page, Scalia cannot build majorities. One senses in him a greater degree of embitterment—at changing times as much as disappointing rulings—and more willingness to expostulate on matters of politics and policy, not law. The heated remarks he offered from the bench a couple of years ago when dissenting from a decision striking down much of an Arizona immigration enforcement statute, are an embarrassing example. So: “a court of one.”

Two good but not novel points hardly make a good book, however—especially one this long. The book is largely a clip job, drawn heavily from other publicly available sources (including Joan Biskupic’s superior American Original: The Life and Constitution of Supreme Court Justice Antonin Scalia, published in 2010). Repeated passages reprint long excerpts from the oral argument in a case, a summary of the published opinions, and reams of harsh responses from various online commentators with preformed views. Not much that’s useful here is new.

What’s new, alas, is not useful. Murphy is full of opinions and speculations. The opinions are conventional, the speculations tendentious. They’re easy to spot, at least: you know you’ve reached the end of the record and the beginning of fanciful speculation when the footnotes suddenly vanish. There are countless examples of overconfident speculations that quickly become treated as fact, and of downright questionable conclusions.

Liberal Catholics and others may take interest in Murphy’s chapter on the Court’s Catholic majority. With neither wit nor accuracy, he titles it “Opus SCOTUS.” (“SCOTUS” is a standard abbreviation for the Court.) Those readers might even find some sympathetic aspects of Scalia’s statements on the “Catholic question,” such as his exploration of the differences between being a Catholic judge and “Catholic judging.” But for Murphy, every Scalia speech has an ulterior motive, one that only Murphy—plus dozens of online critics—is sharp enough to discern. Everyone knows there are grounds for criticism of Scalia’s views on this and other issues. But all those readers will get here is a bibliography, not insight. Murphy’s prose deserves special mention. Workmanlike at best, the writing is often clunky and tedious, straining to achieve eloquence and landing instead on pomposity. Brevity is the soul of wit, it is said. This book is 650 pages long and feels longer. It is a book you will not be able to put down often enough.

It’s not surprising that Murphy’s book has received rough treatment at the hands of conservatives. It is a little surprising that, although a few liberal reviewers have spotted this book’s flaws, many have given the book more tender treatment than it deserves. But it’s not wholly surprising, alas. That’s the point of Jennifer Senior’s quote. Whether Scalia: A Court of One is good or bad, fair or not, has been largely irrelevant. What matters is the occasion the book provides for liberals to come together in gleeful disdain for their stock villain, or for conservatives to gather in joyful defense of their hero. They’ve relived the Scalia controversy rather than reviewing the book. An experienced judicial biographer, Murphy has chosen well and labored hard—but in vain.