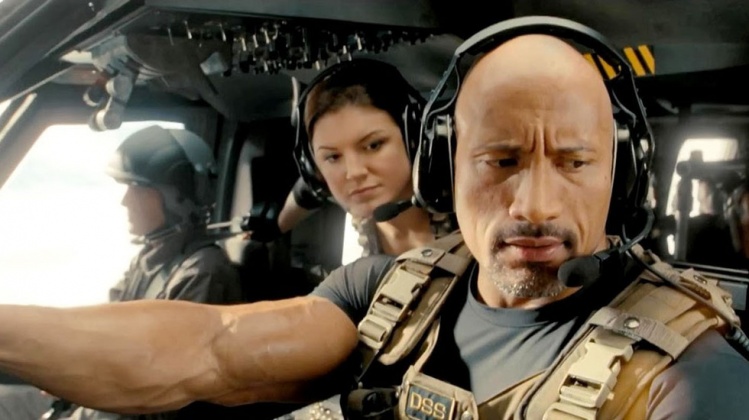 Here I should confess my lifelong avidity for disaster movies. From Towering Inferno in 1973 to Contagion a few years ago, I have spent countless hours savoring cinematic calamities of biblical scope and variety. Without fail in these films, the run-up to disaster provides the most fun. San Andreas is no exception. All these carefree Americans, breezily disporting themselves with nary a thought of harm. And so many of them in penthouse apartments, rooftop gardens, and top-of-the-world restaurants!

Meanwhile, Mother Nature is gathering her breath for an unprecedented hiccup. While all those posh urbanites sit about, arrayed like so many high-altitude hors d’oeuvres, Paul Giamatti, a wonkish Caltech geo-scientist who has discovered how to predict earthquakes with pinpoint accuracy, sits in his windowless laboratory bunker, studying seismometer data in horrified disbelief. “The earth,” he sputters, “will literally crack open!” Won’t anyone listen? Doesn’t anyone get it? “God help us,” Giamatti whispers in despair.

Of course, your typical real-life quake lasts maybe a minute, tops; and one minute of hell plus a hundred minutes of mopping up do not a movie make. So Peyton and his writer, Carlton Cuse, improvise generously, unleashing not one, but several quakes—actually, a “seismic swarm” of them—up the entire California coast, attacking both L.A. and San Francisco. Eventually, alas, even a seismic swarm spends its fury. And then? Tsunami! This is the temblor that just keeps on giving.

Extraordinary times demand extraordinary measures, and the energized Giamatti commandeers a team of grad students to hack their way into a news broadcast to raise the alarm. But there’s only so much that computer geeks can do, and the rest requires manlier action. San Andreas continues the romance of rescue heroism that has seduced post-9/11 America, presenting Johnson’s character, Ray—a specialist for the L.A. Fire Department—as a Renaissance man of first responders, skilled with every conceivable kind of rescue vehicle, switching effortlessly from pickup truck to helicopter to small plane to speedboat. He’s like James Bond, plus giant quads and biceps.

And minus the womanizing, bachelor/bounder attitude. No stylish, wisecracking misogyny here, just pure family values. Johnson’s character at film’s opening is sunk in regret about his botched marriage to the bold and beautiful love of his life, Emma (Carla Gugino), who is divorcing him. Some years ago, the family suffered the loss of a daughter in a terrible accident which The Rock failed to prevent, and subsequently he took his paternal guilt and anguish and, well, bottled it all up. He didn’t share—a spousal sin for which he feels suitably remorseful, offering a hangdog expression in the presence of his soon-to-be ex while forcing himself to endure the smug condescension of her new boyfriend, Daniel (Ioan Gruffudd), a sleazily glamorous developer who is building the tallest building in San Francisco.

Mostly, though, Ray does penance by rescuing people in danger. Like a bloodhound, he sniffs out every conceivable chance for putting his own life at risk in order to save others, and rarely without a calming word of reassurance at the moment of maximum peril. He then returns to his modest house to pore morosely over mementoes of the family life that he is about to lose. In contrast, the new boyfriend tools around in his private jet and tries to buy the affections of Ray’s surviving daughter, Blake (Alexandra Daddario), by wowing her with colossal mansions and the like. Of course, his solicitousness turns out to be meretricious: when the quake hits, he cowers and flees, leaving Blake in the lurch—and at one point ripping a passerby from sanctuary in an alleyway and hurling him to his death—in his greedy frenzy to save himself. Bastard! But Nature unfailingly cooperates in the moral reckoning of the disaster movie, visiting special wrath on the corrupt and the craven, and once Daniel has revealed the rottenness at his core, we await with pleasure his inevitable nasty comeuppance.

As for the rest, you don’t have to be Paul Giamatti to predict this film’s rousing climax. The Rock will wade into the mayhem, save his daughter, save his marriage, save San Francisco—and maybe the nation. The last scene, complete with a reverential showing of the Stars and Stripes, seems to foretell a political campaign. “What do we do now?” Ray’s daughter asks, as the reunited family surveys the rubble of the Bay area from a hilltop. “Rebuild,” answers Ray. The Rock for president!

A fitting end to this calamitous, preposterous movie, with its sentimental cross-hatching and lavish embroidery of doom. Oh, and did I mention that it’s a lot of fun?

LOVE AND MERCY CHARTS A different Southern California disaster. This time, the fault lines and tectonic rumblings are not in the earth, but in popular music, and in the psychic life of one of its prodigies, Brian Wilson of the Beach Boys. Wilson, whose struggles with addiction and mental illness are legendary, was the moving force behind the Beach Boys’ seemingly deathless popularity (second confession: I was a rabid fan as a teenager in the 1970s, during the group’s first big revival). Their trademark surfer pop—garage-band rock-and-roll with some doo-wop touches, adorned with mellifluous vocals—included such early hits as “Surfin’ U.S.A.” and “Little Deuce Coupe.” However charming, it was simple formulaic music, and the story of Wilson—as an artist—is one of an unschooled prodigy struggling to push into new territory. That territory featured ever more complex orchestration, beginning with his innovative 1966 album, Pet Sounds, and culminating in his perpetually unfinished opus, Smile. Love and Mercy charts the rarefied artistic terrain Wilson hoped to discover, and documents the obstacles—the demons and the humans—that almost kept him from getting there.

Artistic creation is notoriously hard to render onscreen (novelist sits at desk, swelling music, montage of rapid action on the typewriter!). With musicians it’s easier, because, well, there’s the music, which is why there are some pretty good music biopics (Walk the Line, Sid and Nancy, Ray). Here Love and Mercy succeeds notably. For long spells director Bill Pohlad keeps us inside the recording studio, offering a keen study of Brian Wilson’s perfectionism as a composer. The film’s curious opening image, a huge closeup of Wilson’s ear, serves a dual function, denoting the site of childhood abuse (his overbearing father hit him there, damaging his hearing), and also the portal for his particular genius—his fixation on, and subtle understanding of, melody and harmony. Wilson’s perfectionism lies in the fact that he is hearing things a certain way, and insistently orchestrates both his music and his musicians until the sound is absolutely right—in one scene, for instance, hectoring three hired cellists for hours about a brief sequence of notes in “Good Vibrations,” until his fellow Beach Boys are beside themselves with exasperation. Can’t they just, you know, sing a pop tune? Why are cellists even here, anyway?

Love and Mercy divides into two interwoven timeframes, with different actors (Paul Dano and John Cusack, respectively) playing the younger and older Wilson—the latter a haunted neurotic beset by insecurities. By far the more engaging part is the earlier one. Dano, who often appears to work in slow motion, turns this somnolent affect to good use, capturing Wilson’s lumpish enigmatic aloofness and placing it in perfect contrast to the lambent lightning of his musical genius. The script, co-written by Oren Moverman and Michael Alan Lerner (son of the great Broadway lyricist, Alan Jay Lerner), makes clear that Wilson’s need to write new music was partly competitive. “Have you heard the new Beatles?” he asks his brothers, referring to Rubber Soul. “We can’t let them get ahead of us. I can take us further.” But it is not the crass commercial competitiveness of his father, Murry Wilson, who urges Brian to forget the weird stuff and keep cranking out more number-one hits. The only real competition Brian Wilson is interested in is with other composers, for the sake of art. Those around him either don’t understand this motive, or actively oppose and even mock it. “Who are you, Mozart?” cousin and band member Mike Love sneers.

To its detriment, Love and Mercy indulges in a lot of easy vilification. It takes pains to present Wilson in all his complexity, yet the figures who play off of him present a buffoonish evil. The soul-crushing begins with Wilson’s father, sulking toxically after being pushed aside as band manager, continues with Mike Love, and peaks in the person of his machinating, fulminating therapist, Dr. Eugene Landy (Paul Giamatti again, having survived the earthquake), who struts about like a New Age Napoleon, flaunting his guru-like power over his hapless charge. Part Svengali, part wicked stepmother, he gratuitously humiliates Wilson in front of his girlfriend (Elizabeth Banks), at one point ripping a hamburger out of his mouth at a cookout, when Wilson has disobeyed his command to wait until others are served first.

Such scenes, however capably executed, make for a film in which everything fits together neatly, themes and points of arrival are telegraphed, and you see it all coming a mile away—rather like those pop hits all the bad guys want Brian Wilson to keep creating. What goes missing is the elusive spark of strangeness—the subterranean jolt, if you will, that was at the core of Wilson’s accomplishment, and that the best moments of Love and Mercy thrillingly capture.