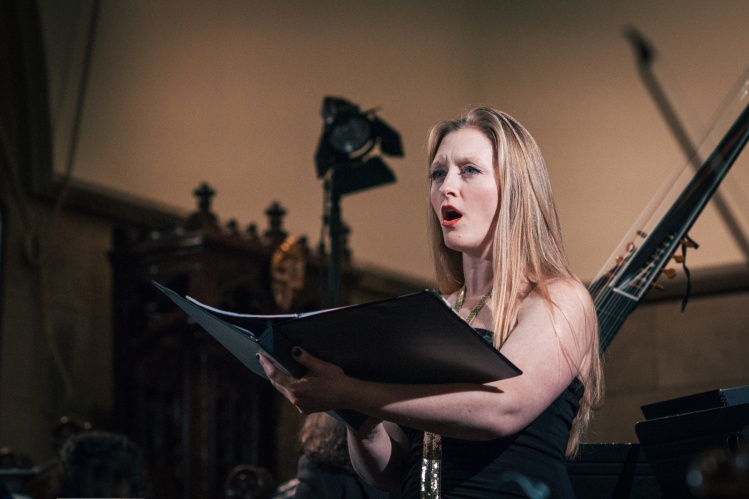 Courtesy of the Academy of Sacred Drama

In a gilded back chapel of New York’s Riverside Church, a small ensemble performs the modern premiere of Giuditta, a 1705 oratorio by Baroque composer Domenico Freschi. Five singers play parts in the story of Judith, the woman warrior who seduced and beheaded her peoples’ enemy. Strings, a recorder, and a continuo group cluster onstage, bowing and blowing and tapping in the glow of golden lamps. A countertenor, playing the villainous Olofernes, steals the show with piercing threats. At the front, the violinist serves as conductor, marking tempo with knee bends and nods.

Seated on a creaky wicker chair, I follow the new English translation, flipping through a packet tied with a ribbon. The translator has included meticulous footnotes. The piece is lovely, ornate and contrapuntal. The scene is shadowed and intimate, another quiet moment of excellent New York music-making. But what’s most remarkable isn’t so much the space, the scholarship, or the talent. It’s what happens before the performance and during intermission. In a church hall adjacent to the chapel, musicians and concertgoers sit at round plastic tables sharing potluck dinner and dessert. Eating together isn’t just a fundraising ploy; invitees don’t have to be donors. Rather, the gathering creates opportunities for professionals and concertgoers to ask questions about the music, discuss its texts, and foster connections.

The Academy of Sacred Drama is a fledgling early-music organization founded by the young violinist Jeremy Rhizor. Rhizor grew up in Las Vegas, did undergraduate work at the Eastman School of Music, and earned a graduate degree from Julliard. While at Eastman, he began to explore early music, making “wonderful discoveries” about interpretation and performance practice, finding “answers to questions that [he] didn’t know how to articulate.” Now Rhizor has turned his passion into full-time job. The Academy is an intellectual, artistic society of professional and amateur musicians, as well as patrons interested in the group’s musical or religious work. Over the past year-and-a-half, it has produced eight oratorios around yearly themes. Last year, all the works told the story of Jonah; this year, the story of Judith. The Academy also publishes the Academy Journal, a print and digital compendium of scholarly writing, exegesis, artwork, and poetry relevant to the season’s programming. The group also creates new musical editions and translations, exhuming forgotten music.

As a manuscript editor, Rhizor puzzles over the very conundrums that first drew him to early music, questions of authenticity and expression. He’s particularly interested in the baroque oratorio, a genre he feels is understudied and underperformed. Oratorios, like operas, are long musical works with characters, but they don’t include costumes and sets. Handel’s Messiah is perhaps the most famous example. Characters and plotlines come from Biblical stories or the lives of saints; sometimes, soloists play personified virtues, like Hope or Obedience. Early oratorios were often written in two halves; between the two parts came a sermon, a sneaky move to “re-church” unwitting audiences. As the oratorio popularized, sermons were replaced by receptions; performances were held in fancy palaces rather than churches.

But the Academy of Sacred Drama performs early music other than oratorio—including historia, dialogues, and motets—that tells sacred stories. And its primary goal isn’t scholarship. “If all I wanted to do was pump out new editions,” Rhizor says, “…it wouldn’t matter how many people were there [at the performances]. But what I really want to do is explore oratorio as a community with other people—everyone contributing to a theme, to an idea, to a community of thought around the genre…giving us the opportunity to explore the stories.”

In a city with so much music, it takes guts to start yet another arts organization.
sharetweet

When these pieces were first written, every listener knew of fickle Jonah and brave Judith. But that’s no longer true. Rhizor recalls a rehearsal at Julliard; his orchestra was learning St. Matthew’s Passion, and the conductor kept stopping to explain the piece’s plot points. Rhizor found this a waste of rehearsal time. But at break, complaining to his colleagues, he realized most of them didn’t know the passion story and had needed the conductor’s exegesis. They were unfamiliar with the source text of masterworks they would perform for their entire careers.

Through the Academy, Rhizor hopes to create a space for philosophical inquiry, a “Baroque style” academy of thought and friendship. In his Publisher’s Letter, he calls the process of discovering, performing, and engaging with these works a “communal effort,” not something restricted to an elite cache of experts.

And there’s plenty to engage with. Jonah, who initially resists his mission to Nineveh, offers an injunction against sanctimonious hypocrisy. Judith teaches perseverance in the face of tyranny. “People who claim that they subscribe to Biblical teachings or go to church often don’t have a complete enough worldview to be able to explain how those stories fit into their lives,” Rhizor explains. “On the other side of things, there are people who claim they don’t believe in anything related to Christianity…and yet there are portions of their belief system that are actually deeply intertwined with those very stories.” Over food, and with a love for early music as common ground, the Academy creates “an opportunity for people from all those camps to come together and actually discover where their belief overlaps…the value of the stories that helped create that belief.”

That night in Riverside Church, other performances were going on. Downstairs, the Manhattan School of Music orchestra concert; in the auditorium, a production of Sweeney Todd. In a city with so much music, it takes guts to start yet another arts organization. But that’s what Rhizor has done: with the noble aim not only of producing great art, but of creating community—and maybe even making people aware of their spiritual need. “There are other ways of interacting with religion,” he says “…through beauty, art, and music.”