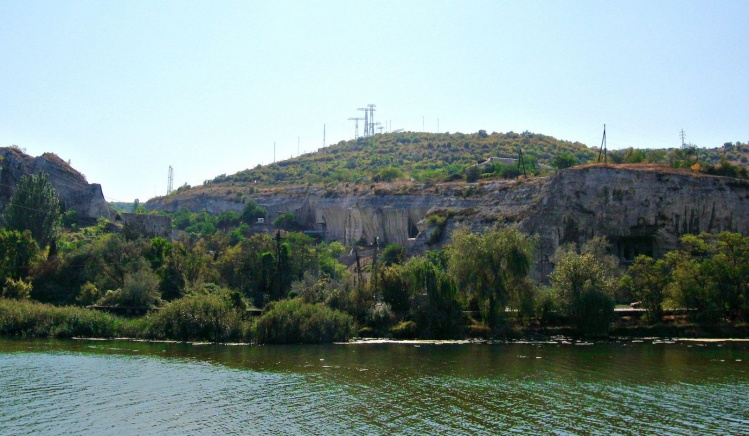 Vast open fields stretch for miles toward the southern horizon, dark brown, waiting to be sown with wheat or rye. A river winds lazily along, its thickets of willow and oak sheltering nightingales. It’s a landscape that might be Minnesota, except for the particular histories that so deeply mark it (and those nightingales, which aren’t found in the Americas). This is central Russia, and I’m traveling with a dozen undergraduates from Bates College in Maine. Our destination today is a natural spring that flows from limestone outcrops toward the river below. What makes the visit more than a geology excursion are our guides, who move gingerly down a well-trodden path ahead of us: both in black cassocks, each equipped with a cell phone and a cross. Fathers Oleg and Zbigniew: one Orthodox and the other Roman Catholic, one a Russian seminary graduate nearing forty, the other a Polish transplant in his fifties, will tell us briefly about the history of the spring, before we retire for lunch and longer conversation at a nearby café.

Holy springs are as much a part of this landscape as oaks and willows, or the occasional trenches that are reminders of the great tank battle fought here in 1943. Orel is a sleepy provincial city of just over three hundred thousand, whose natives take great pride in their literary progeny (Ivan Turgenev the “westernizer” and Nikolai Leskov, one of whose novels depicts the life of provincial clergy), but also in their resilience during WW II. The city was occupied by Nazis for nearly two years; when the end of the war is celebrated each May 9 there is no family that does not feel some intimate link to its losses. The course I’m teaching is loosely organized around the theme of “Environment and Culture”: it includes visits to writers’ homes, a national park, a monastery. Along the way we talk with agronomists developing cold-resistant apples and an oncologist who has tracked thyroid cancers in the wake of Chernobyl (there are fewer than initially anticipated). The spring at Saltyki is part of the complicated, scarred, often beautiful landscape I want the students to experience and, hopefully, come to understand. Frs. Oleg and Zbigniew are the best possible guides to its history.

In the headlines and beyond, these are fraught days; May of 2014 hardly seems an auspicious time for cross-confessional dialogue in southwest Russia. Throughout the month the state-run news media is dominated by allegations of atrocities perpetrated against Russian speakers in Ukraine; a nightly talk show whips viewers into a frenzy of indignation at “fascists” in Kiev. Ukrainian-Russian politics are deeply intertwined with culture, language, and religion: western, primarily Catholic Ukraine leans toward Europe; eastern, Orthodox Ukraine has strong historical ties to Russia. But the friendship between these two men manifests the possibility of quite different relations between Orthodoxy and Catholicism in easternmost Europe.

THE TWO MET IN  2000, when Fr. Zbigniew first arrived in Orel. Fr. Oleg took the initiative, and over time they’ve became close enough friends that they attend each others’ services on religious holidays and feast days. Fr. Zbigniew is sole priest at the Church of the Immaculate Conception of the Virgin Mary, Orel’s only Roman Catholic parish; he is by training a builder (at one point during our conversation over lunch he ponders the restaurant’s beams and says they’re probably plastic), and has been intimately involved in the construction of his congregation’s building. Fr. Oleg, on the other hand, serves with four other priests in a parish that nominally has eighty thousand parishioners—although at most five hundred attend services. Both men have come to the priesthood in a period of religious renewal in Russia, after seventy years of communism. The religious repressions of the Soviet era affected all traditions and denominations; the Orthodox Church, however, particularly in the postwar period, was granted limited ability to train priests and keep churches open. Catholics, on the other hand, a tiny minority historically associated with immigrant groups (Germans brought to Russia in the eighteenth century by Catherine the Great, Polish residents of the Russian Empire, Ukrainians), were allowed only two churches throughout the whole of the USSR.

There was no Catholic priest in Orel in the Soviet era; but, remarkably enough, Catholics were baptized by Orthodox clergy, and at this very spring, which served as site of clandestine services after a small chapel on the bluff above had been destroyed. The small grotto from which the water flows is shaded now by a towering willow; small icons are set into rough niches in the limestone, and the willow itself is tied with multi-colored scraps of cloth and ribbon—an essentially pagan practice, Fr. Zbigniew suggests, a way of saying “I was here.” We stand in the willow’s shade, across from a hand-lettered sign that reads “Please Don’t Litter,” and listen as both priests offer prayers. Fr. Zbigniew explains how we might drink or wash our faces—crossing ourselves or offering prayers in silence. As we’re listening to his explanation, a couple finishes collecting drinking water in large containers; they stand politely and then the man tells us that the water is among the purest in the region—he works for the local Environmental Protection service and has seen the data. The couple drive off up the dusty embankment in their Russian four-wheel drive, and we’re left in the cool quiet of noonday.

As we settle in at the café for mushroom soup and garlicky eggplant, Frs. Zbigniew and Oleg bless our meal and invite questions. This is not a conversation among students of religion but among undergraduates whose own religious background (if it even exists) is unknown to me. One never knows just what they’ll ask. This isn’t their first encounter with religious issues on the trip: from our first walking tour of Moscow we’ve heard about the role of Orthodoxy in post-Soviet life, as a fundamental part of Russian culture and identity, and an increasingly prominent aspect of official rhetoric. We saw the churches of the Kremlin and later visited Optina Pustyn, a monastery south of Moscow that has repeatedly played a key role in Russian intellectual life. And our first exposure to a sacred spring came at the convent of Shamardino, where one of the sisters offered us a ladle of “living water” with a radiant smile. Throughout these excursions I’d been chagrined to realize how little my students know about religion, and how opaque the liturgical traditions can be to them. Four of them managed to stand through much of the Optina service, but at dinner their stories were filled with awkward jokes: “Some people were making bread”; “the guy with the holy smoke came around.”

In this conversation, as in an earlier visit in 2006, students’ questions for the priests are wide-ranging: will the unbaptized and non-Christians go to hell; how did they come to be priests; what’s the hardest part of their jobs; what is it they most wish for; what was their training; how many churches are there in Orel. They ask, too, about how they pray, how they communicate with God; what their favorite books are (other than the Bible!), and whether all Orthodox priests have such wonderful voices. Both men respond with generosity and humor, but also with a directness that for some reason surprises me. Responding to one young woman’s question about whether it’s possible to be both Catholic and Buddhist, Fr. Zbigniew says no, not if you take seriously the difference between a profession of faith in God and a tradition that knows no God. I admire his candor, the way in which he’s taking the young woman’s question seriously. For all of the informality and touristic aspects of our visit, both men have approached this encounter as an occasion for what I can only call religious education.

And education, it turns out, is a key concern for both of them. For Fr. Oleg, there is palpable excitement in welcoming a new generation of believers to the post-Soviet church, but also the challenge of working in with what he calls two different cultures. In the late Soviet era, virtually anyone who presented himself could enter the priesthood, and many had no formal religious education. He longs to find time to educate his parishioners about Orthodoxy, particularly since the language of the service is incomprehensible to many Russians—it is “ninth-century Bulgarian”—and they need to be taught what happens during the liturgy, and what it means. The demands of liturgy and embedded assumptions make undertaking the work of education difficult, however.

And both men have dreams for their respective churches: Fr. Zbigniew’s is to open a home for abandoned children—to begin his own “adopted family.” Fr. Oleg dreams of going out one day and discovering that there is no more poverty—no more beggars, no more abandoned children digging through dumpsters. That a “Mother Theresa” would emerge in Orel. He feels how little he himself can do. It is, he says, a drop in the ocean.

And as I reflect on the broader contexts of our conversation, I think about drops in the ocean of political hostilities and misunderstanding. These two men make tiny but significant steps toward mutual respect and understanding. They attend each other’s services; they see each other frequently and, Fr. Zbigniew says, “without obstacles”; they find time to have lunch with a group of American students and their professor. As Fr. Zbigniew puts it, “This is the basis for our ecumenicity. Among our parishioners we have mixed Russian Orthodox- Roman Catholic families. This is the future of the church, it rests on this elementary level—the level of ordinary people, our parishioners. As I said once in a sermon, this is what the unity of our church is founded on, that is in the family, where people live together, pray together, celebrate holidays together.”

For a few brief hours, my students and I get a glimpse of that family, so wholly unlike the images being endlessly replayed on official Russian media. Both men operate in the rich terrain of ancient traditions seeking to open dialogue with youth and with a society in the throes of enormous change. They are acutely aware of the historical terrain in which they operate—a terrain of violence, repression, and hostility, but also of intermarriage, communication, and shared concerns. One can only hope and pray that such friendships become the soil of broader understandings. That tiny drops might keep flowing from small springs.

Jane Costlow is professor of Environmental Studies at Bates College in Lewiston, Maine.