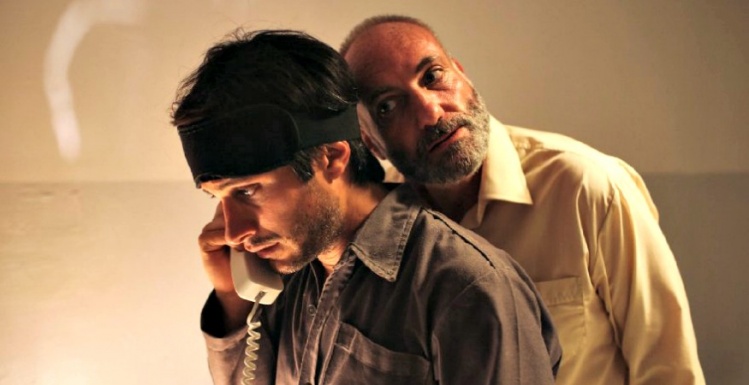 When good writers contemplate evil, they write something like Macbeth or No Country for Old Men. When they detect stupidity, they can make it the material for farce, as in the stories of Gogol or the movies of Laurel and Hardy. But what happens when writers or filmmakers encounter the collusion of evil and stupidity? In that case, isn’t satire what’s called for?

Jon Stewart didn’t think so when he decided to bring to the screen Maziar Bahari’s memoir of the months he spent in Iran’s notorious Evin prison. The film that Comedy Central’s leading satirist has written and directed is painful, poignant, suspenseful, and sometimes wryly funny, but Rosewater isn’t the satire that Stewart’s fans may have expected. He made the right choice. Satire, among its other functions, can startle us into a new awareness of problems so quotidian that we take them for granted—as when Gulliver’s Lilliputians mistake his watch for a god whom their giant visitor continually consults, thus making us laugh at our slavery to time and schedule. But why would Stewart use satire against a regime that nobody takes for granted and one that announces its stupidity so starkly that it’s too easy a target for ridicule?

In a sense, the movie is an apology for a bit of satire that backfired when Iran’s police turned it against the Iranian-born, London-based Bahari, a reporter for Newsweek. Stewart had dispatched The Daily Show’s Jason Jones to Iran just before that country’s 2009 elections, when the egregious Mahmoud Ahmadinejad ran against the liberal reformer Mir-Hossein Mousavi. The show’s producers set up a deliberately ridiculous, nudge-nudge-wink-wink interview with Bahari, in which Jones made silly jokes about being a spy and about how ogre-like all Iranians seem to Americans, with Maziar tacitly playing along with the joke. Though the skit was meant to show Americans that they had a lot in common with Iranians, Iran’s police interrogators took the comedy footage as proof that Bahari was himself a spy for the West, in league with MI6 and/or the CIA. Now, by creating a non-satiric film of such humanistic simplicity, Stewart has achieved precisely what the original mock interview strove for: through one person’s plight, we witness the bewilderment of a privacy-loving people preyed on by their own meddling, paranoid, humorless leadership.

Right from the start, Rosewater manages to be both stinging and compassionate. Upon Bahari’s arrest, his mother (played by the wonderful Shohreh Aghdashloo, who possesses the smokiest voice since Melina Mercouri) insists on serving tea to the arresting officer. Not because she’s hoping she can change his mind, but because she won’t let the regime’s cruelty and fanaticism keep her from adhering to venerable Persian courtesies. Ayatollahs may consider themselves the guardians of law and order, but she is the real conservative. And the officer’s response? “Put on your veil, Madam.”

Kept in a solitary confinement interrupted only by interrogations and beatings, Bahari summons the spirit of his late father, a communist of the 1950s who never buckled under the tortures of the Shah’s secret police in the very same prison that now holds his son. But the paternal inspiration proves shaky because the son can’t help reflecting that what fortified his father was an ideology just as fanatical as the worst mullah’s. Indeed, Mazier Bahari is being tortured by a regime that learned its brutal techniques from the Shah’s men, who had learned them from Stalin’s men. Much of Rosewater is double-edged in just this way, which makes it astonishing that some critics have accused the film of glibness.

The acting supports the complexity. As Bahari, the Mexican actor Gael García Bernal is such a compound of frailty, slyness, and high intelligence that you’re often as puzzled as his interrogators as to whether he is close to breaking. And in the role of the chief interrogator, or “specialist,” the Danish actor Kim Bodnia manages to be frightening, pathetic, and even funny. (His prurient interest in the sex lives of Westerners is darkly comic.) A realistic, well-rounded portrait of a monster is always more frightening than a melodramatically concocted gargoyle.

On his first outing as director, Stewart proves astonishingly adroit. Let other directors sweep horizons with their cameras; this neophyte knows how to fill a tiny prison cell with drama. Digital effects can give us monsters, planets, battles, but here, in one brief, magical passage, they project the protagonist’s remembered childhood and adolescence onto storefront windows as he strides down a London street. And while other filmmakers desperately ratchet up the levels of violence and gore to satisfy the jaded moviegoer, Stewart limns the brutalization of a human being without ever sinking into the pornography of violence.

From the journalist as hero to the photojournalist as scumbag. Nightcrawler is a monster movie that wants to be a social indictment. Surely it’s no accident that the title evokes images of vampires or outsized devouring worms, since its protagonist, Louis Bloom (Jake Gyllenhaal), preys on the public’s appetite for sensational news by scouting out violent street crimes and bloody traffic accidents and then selling his video footage of them to a ratings-hungry TV station. By the end of the movie, he has caused several deaths but has achieved his ambition of heading his own camera team.

Louis isn’t so much a character as a demonic force unleashed by the public’s bad taste, and it’s the public whom the film ultimately indicts. But the public doesn’t have a face; Louis does. And so it’s this monomaniacal creep the viewer has to live with for two hours. Perhaps writer-director Dan Gilroy could have made Louis compelling by exploring the psychology behind the hunger that drives him; but, as rendered here, the character has no past, no human ties, no moments of doubt or inconsistency, and no real purpose apart from making money. We never wonder what he’s going to do next because we always know: the worst possible thing.

You can pinpoint what went wrong here by watching Billy Wilder’s Ace in the Hole (1951), which deals with exactly the same theme. Kirk Douglas plays a reporter who prolongs a victim’s agony in order to turn a single article into a series. His character is just as ruthless as Gyllenhaal’s, but he’s also challenged by the better elements of his own nature, including his pity for the person he’s exploiting. This tension is what sustains our interest. Goethe’s Faust (another egotistical SOB) lamented, “Two souls, alas, are dwelling in my breast,” and that applies to all interesting antiheroes. But Louis doesn’t seem to have even one soul.