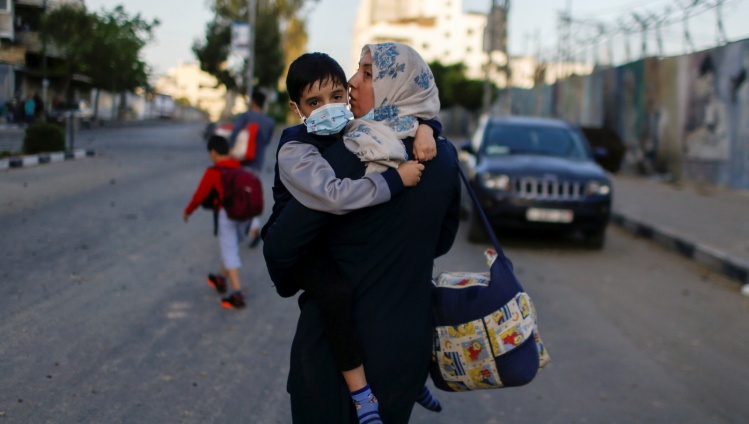 A Palestinian woman carrying her son evacuates after their home was hit by Israeli airstrikes in Gaza City, May 12, 2021 (CNS photo/Mohammed Salem, Reuters).

After four years of Donald Trump’s America-first foreign policy—a policy of snubbing allies, coddling dictators, and turning the State Department into an agent of the U.S. arms industry—the Biden administration promised a fresh start. America would once again promote democracy abroad, oppose the rising tide of ethno-nationalism, and defend human rights. Addressing our top diplomats in February, Biden said that the United States would reclaim its “credibility and moral authority” and promote the “equal rights of people the world over,” including “people of every ethnic background and religion.”

An early test of the new administration’s commitment to human rights has now appeared in a part of the world Biden had hoped to put on the back burner: Israel and the Palestinian territories. One can easily understand his reluctance to spend much time on yet another attempt to broker a peace deal between Israel and the Palestinians. For decades, U.S. presidents have tried and failed to find a “two-state solution” that would satisfy both sides. Even when conditions for peace appeared to be ideal, negotiations have always hit a snag; and, with a right-wing coalition now governing Israel and the militant group Hamas in charge of Gaza, conditions are far from ideal. But presidents don’t get to choose the crises that arise on their watch, and Biden cannot just look away from the violence that has erupted in the Holy Land in the past few weeks.

The trouble began in the East Jerusalem neighborhood of Sheikh Jarrah, with what the Israeli government has called a real-estate dispute and what Palestinians describe as ethnic cleansing. Palestinian households whose families have lived in Sheikh Jarrah for decades have been gradually forced out by a settler organization and the Israeli courts. Such evictions are part of a larger pattern of displacement. Since the Six-Day War in 1967, more than 14,600 Palestinians in East Jerusalem have had their residency revoked by Israel, which claims all of Jerusalem for itself in defiance of international law.

Biden’s administration must do whatever it can to change the conditions that keep leading to this cycle of violence.
sharetweet

Tensions over the impending eviction of four households—and over the government’s decision to block off a Palestinian gathering place near the Damascus Gate—had been building since April. On May 7, the last Friday of Ramadan, Israeli police raided al-Aqsa Mosque, where thousands of Palestinians had gathered to pray and show their support for the Arab residents of Sheikh Jarrah. Hundreds were injured in the ensuing clash between stone-throwing protesters and police armed with rubber-tipped bullets and tear gas. The following Monday was Jerusalem Day, when Israeli nationalists celebrate the disputed reunification of the city by parading through the Muslim Quarter on their way to the Temple Mount, the site of al-Aqsa Mosque. This was also the day the Israeli Supreme Court was scheduled to announce its verdict on the latest round of evictions. Anticipating more clashes between Palestinians and Israeli hardliners, police again raided al-Aqsa. Hamas warned that Israel would pay a “heavy price” if its forces did not leave the mosque before 6 p.m that evening. The first rocket fire from Gaza began a few minutes after the hour, the first Israeli air strikes not long after that.

Since then, Hamas has launched more than three thousand rockets into southern Israel. Most of these have been intercepted by Israel’s “Iron Dome” defense system, but the few that have managed to get through have killed at least twelve people. Meanwhile, Israeli air strikes have killed 219 people in Gaza, including 63 children. There have also been alarming outbreaks of violence within Israel proper between Jewish and Arab citizens—people dragged from their cars and beaten, Arab stores ransacked, synagogues torched. The situation has rapidly escalated beyond anyone’s expectations, provoking fears of a full-blown civil war.

President Biden belatedly joined the rest of the world in calling for a cease-fire, but that’s not enough. His administration must do whatever it can to change the conditions that keep leading to this cycle of violence. Hamas’s indiscriminate rocket attacks are reprehensible. But the U.S. government has almost no leverage over Hamas. It has plenty of leverage over Israel, if only it would use it. Every year the United States gives Israel almost $4 billion in aid with no strings attached, despite the illegal settlements in the West Bank, the inhuman blockade of Gaza, and the ongoing expulsion of Palestinians from East Jerusalem. The effort to remove or subjugate Palestinians “from the river to the sea” is a textbook case of ethno-nationalism and a clear violation of human rights—the kind of thing we routinely denounce when it happens anywhere else in the world. We must denounce it in Israel too, and demand that the Israeli government stop treating Arab Israelis like second-class citizens and Palestinians in the occupied territories like captives.

It is time to attach some strings. Conveniently, there are already laws on the books to help us do that. The Leahy amendments, named after Sen. Patrick Leahy of Vermont, prohibit the Departments of State and Defense from providing military aid to any foreign country that violates human rights. All Washington needs to do is apply these amendments consistently. Until it does so, promises to restore America’s “credibility and moral authority” will ring hollow.