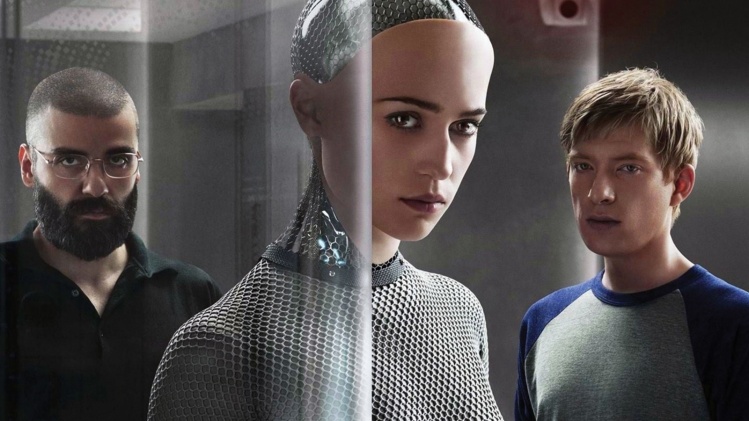 Ex Machina is a deceptive movie about deceptions: the deception of attractive surfaces, the deception at the heart of a scientific experiment, the deception employed by an immured android that yearns to roam. Most of all, Alex Garland’s film is about the very human tendency to deceive oneself in order to feel needed. And to realize this last theme Garland pulls a fast one on his audience.

At first the plot seems straightforward enough. Caleb, a young computer programmer for a fabulously successful search-engine company called Bluebook is chosen, supposedly by lottery, to spend a week with the company’s founder and CEO at his house in the country. Depending on your point of view, this domicile is a technological marvel or sheer horror: the décor is a totalitarian version of Swedish Modern; rooms become prison cells at the press of a button; the lighting is oppressively womblike; there are no books in sight but there are bottles of expensive liquor everywhere. Everything is under surveillance, and it’s hardly surprising that, though there are TVs in all the bedrooms, there are no programs to watch, only views of monitored rooms.

The lord of this sterile manor—an egomaniacal, bodybuilding control freak named Nathan—soon reveals that Caleb is to take part in an experiment that takes the Turing Test one step further. Alan Turing proposed that if, after a certain period of interaction, a person cannot tell that he is communicating with a machine rather than a human being, then the machine can be said to think. But Caleb, played by Domhnall Gleeson, will know from the start that he’s conversing with a robot because, despite Ava’s pleasingly humanoid face, “her” wires and tubes are always visible. If, by the end of the week, her responses still impress him as human-like, then she passes the test, proving that an android can behave as a human.

Ava passes the test all too well. Caleb becomes infatuated with her and joins her plot to free herself from Nathan’s control. It turns out that this very rebellion was anticipated by Nathan and is part of his secret plan. But Caleb anticipates Nathan’s anticipation. In Ex Machina one deception always operates within the framework of a larger deception. The final, all-encompassing trick is played on the audience’s sympathies by writer-director Alex Garland. Right up to the conclusion, the fetching Ava seems to perform the role of maiden-in-distress, and Caleb, weedy nerd though he is, seems to be the knight who will rescue her from Nathan. But there’s a catch. While Nathan may be an insensitive manipulator, he never lets go of one vital fact: Ava is a machine. By contrast, Caleb’s gallantry blinds the audience to his monumental folly: he’s become dazzled by sheer surface. So we are pulled up short in the final scenes by the recognition that we’ve been rooting for a self-deceiving fool.

Garland’s screenplay works so well overall that the viewer is tempted to overlook a few plot snags, yet these do tend to undercut the consistency of the characterizations. We are told that Caleb is quite bright and scientifically informed, if not the mastermind that Nathan is. Yet the experiment first outlined by Nathan seems so dumb that we wonder why Caleb doesn’t realize right away that it’s a ploy. And by the time we’re told what Nathan’s ultimate objective is, we can also see, retrospectively, that he actually attained his goal early in the experiment, about two-thirds of the way through the movie. So why didn’t he just end the experiment then and declare victory?

Yet the movie does finally succeed in getting us to question our tendency to impute benevolence and even personality to our mechanical devices. Ava’s flirtatiousness and neediness offer Caleb a relationship that he apparently can’t find with a real woman, though the script might have been stronger if it had told us more about his previous relationships (if he had any). But perhaps Gleeson’s childlike face fills that information gap. One of the movie’s neatest ironies is that the macho Nathan seems as womanless as Caleb. The inventor’s self-inflicted isolation is underscored by a closetful of female android dummies. Are these past experiments, or ex-girlfriends? Or both?

Which brings us to Ava, the dummy that refuses to be hung up in that closet, wanting to be a who rather than a that. She’s the Frankenstein monster of this movie, but she’s so much more dangerous than Mary Shelley’s creation because so much more inviting. And while Frankenstein’s monster is unambiguously human in his loneliness and fury, it’s difficult to know how to take Ava. Nathan says that her brain has been loaded with all the audiovisual experience he’s garnered from a multitude of iPhones and iPods, but what is her digital brain doing with all this information? We see her get acquainted with Caleb, little by little, but this social behavior is all calculated to get him on her side. The one presumably sincere thing she says to him is that she wants to be on a traffic island in the midst of crowds in a big city. But to what end? Is she like Poe’s “Man of the Crowd,” who simply can’t stand solitude? When Ava achieves her objective, we hear uplifting inspirational music on the soundtrack, the kind usually meant to make audiences feel a warm glow. But why should we feel such a glow at the sight of robot liberation? What’s being liberated besides circuits and plastic? Or is Alex Garland toying with us, trying to leave us as smitten with Ava as Caleb is? Ex Machina is one of the most interesting movies around, but you may feel a little queasy by the time the credits roll.