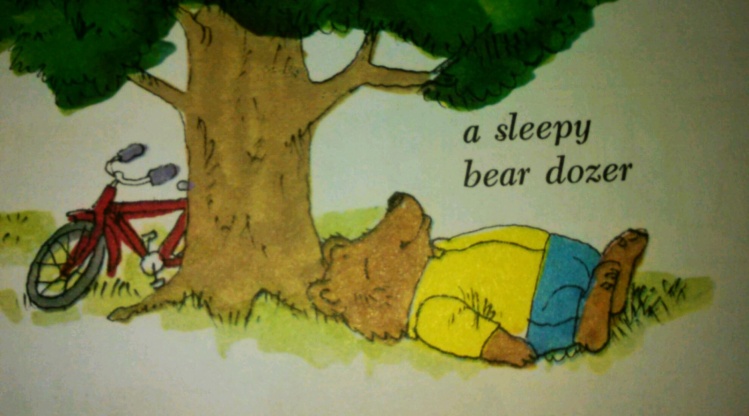 Leave it to the Wall Street Journal to take the fun out of the busy world of Richard Scarry.

This weekend’s WSJ Books section features an essay by Meghan Cox Gurdon on the work of the children’s-book author and illustrator Richard Scarry, prompted by the fiftieth anniversary of Richard Scarry’s Best Word Book Ever (and a new anniversary edition of same). There are moments in the essay where Gurdon captures some of what makes Scarry’s work so charming and appealing all these years later. But for the most part, the world I know well from Scarry’s books – having studied them diligently as a child, and now again as a parent – is not recognizable from Gurdon’s culture-warrish, politicized perspective.

Scarry, Gurdon writes, “made adulthood seem industrious and purposeful, an inviting realm to which children must naturally aspire.” (She also says this stood him in contrast to most children’s authors, a claim that doesn’t ring true to me, but the terms are so broad it’s impossible to really evaluate what she’s trying to say.) Is it true that Scarry’s world depicts adulthood as a realm of industry and purpose? To me, the line between childhood and adulthood in Scarry’s books has always seemed rather blurry. The characters are all anthropomorphized animals, for one thing. There are some family units, with “Mother Pig” and “Father Pig” and so forth, and there are scenes of schoolchildren and kids on a playground that are easy enough for human kids to identify with. But the animals Scarry drew pursuing their various vocations, who seem to be the “adults” Gurdon is thinking of, the ones “engaged in productive work,” are goofy and not especially mature (they drive vehicles that look like pickles or crayons or jack-o-lanterns), and they are constantly making a mess of their pursuits (the firefighters, a troop of pigs who wear old-timey military helmets and colanders on their heads, are so bumbling it’s a wonder every thatch-roofed Tudor cottage in Busy Town hasn’t burned to the ground by now). And what about Lowly Worm – is he a kid or an adult? Why exactly does he live in Huckle Cat’s house?

“There are no inactive creatures in Scarry’s eventful tableaux,” Gurdon claims, “let alone portrayals of indolence or torpor.” Well, let’s see. When I open my son’s copy of Richard Scarry’s Best Little Word Book Ever to the second spread, I see a cross-section of Huckle Cat’s house. The cats “are always busy doing things around the house,” the text explains. But it goes on: “Lowly is in bed because he is still tired. Sleep tight, Lowly.”

Still, as I have mentioned, Lowly Worm is a perplexing figure; perhaps he is the Shakespearean Fool of Busy Town, whose defiance of convention is a necessary release for an otherwise rigid society. There’s still the “tired traveler” on page 37 of Cars and Trucks and Things That Go, snoozing against a construction fence, his bindle by his side. He’s pretty inactive. He may even be indolent. Or, you could look closely at the previous spread of that same book, pages 34 and 35 of the current edition, which happens to be the very spread the WSJ used to illustrate Gurdon’s review. There in the top right corner, above the cars that have been crushed by a steamroller, the construction vehicles paving a road, and of course the mice riding in their “cheese car,” is a bear taking a nap beneath a tree – labeled, in whimsical Scarry fashion, “a sleepy bear dozer.”

So, what Scarry depicted was less an adult world and more a world of animals doing people things. And sometimes those animals were not productive; sometimes they were even downright torpid. That’s because Richard Scarry wasn’t trying to depict a worker’s paradise in his books. He wasn’t turning out capitalist (or Marxist?) propaganda. He was trying to entertain children.

Much of Gurdon’s review focuses on comparing the newest edition of Best Word Book Ever and the original, published in 1963. This analysis is of great interest to me, and I am only sorry that it too is forced into a cramped culture-war frame. Gurdon writes that twenty-one pages have been omitted, including ones cataloging varieties of birds, houses, musical instruments, and flowers. I didn’t know this, and I’m sorry for it. But she also shakes her head at the loss of “courtly little authorial observations and depictions acceptable in the Mad Men era that today would irritate feminists.” Oh my. Are we really still talking about “feminists” as if the word denoted some small but strident interest group, instead of, you know, most people? One of Gurdon’s examples: “The ‘handsome pilot’ and ‘pretty stewardess’ who used to work on the passenger jet have been dryly replaced by a ‘pilot’ and ‘flight attendant.’” Well, you say “courtly,” I say “needlessly patronizing.”

Listing the many pages that have disappeared, Gurdon complains that “the world as it appears in the 2013 relaunch is narrower in scope and confined to categories already familiar to most little children.” It does not seem to have occurred to her that the other changes she disdains – like replacing “pretty stewardess” with “flight attendant” – might make Scarry’s world broader in scope and less confining in its categories. Is it a bad thing for the industrious work of a pilot to seem as “inviting” to a little girl in 2013 as it did to a boy in 1963? Gurdon does not come out and say so, but she makes sure to leave you plenty of room to think so. “One may be sympathetic or not to the editorial urge to modernize…. The original is more striking and delightful, whatever you may think of its traditional gender depictions or the retrograde inclusion of ‘Indian’ and ‘Squaw.’” It’s an odd place for a reviewer to decline to venture an opinion.

Gurdon also implies that these changes are all the work of meddling editors who “have tweaked Scarry’s labels and small bits of text to remove traditionalist presumptions and install a more egalitarian, ‘enlightened’ view.” But was all this done over Scarry’s objections? She doesn’t say. Scarry died in 1994, and he worked right up to the end. Isn’t it possible he initiated some of these changes, or at least happily agreed to them? Was it not Scarry himself who drew that “(female) judge” figure Gurdon takes note of, the one that now appears in place of the “(male) soldier” on the “When You Grow Up” spread? Did he grumble about hypersensitive feminists as he did so? Or did he think removing the now-outdated gender roles from his books would help and not harm them? Maybe he was glad to put Father Pig in the kitchen washing dishes or beating eggs. Maybe he got a happy little kick out of drawing a bunny pilot in a skirt instead of pants.

I don’t even know what to make of this example Gurdon gives: “A small bear in the original book ‘comes promptly when he is called to breakfast,’ whereas the same bear in the new edition ‘goes to the kitchen to eat his breakfast,’ uncommanded by his parents.” What “enlightened” sensibility is that change supposed to be catering to? Even a feminist like me is very pro-obedient children. I am also very, very familiar with the bear in question (his name is Kenny), having read and reread his itemized breakfast menu with my son several thousand times, including once this morning. And I would like to point out that Kenny Bear’s parents are not depicted anywhere on those pages. So perhaps—and I know this isn’t a fun explanation, but stay with me here—perhaps an editor, or even Scarry himself, decided that “when he is called” was too obtuse, given that no one but Kenny appears in the illustration. Maybe, in other words, there’s an explanation that has nothing to do with creeping political correctness, and is just about editors, you know, editing. An editor's job is to make sure that the author is communicating clearly with his audience. Similarly, modernizing gender roles is not just a sop to feminists; it's a way of making sure the books stay timeless, so kids today experience Best Word Book Ever as a book about a world something like our own, but more fun, instead of as a book about a world that resembles our own fifty years in the past.

Gurdon quotes Richard Scarry’s son, nicknamed “Huck,” explaining that his father’s “drawings are so fun and funny because he had fun creating them.” Yes! Fun and funny is exactly what Scarry’s books are. If you set out to write a review essay about them and you find you have made them sound tendentious and medicinal, you may want to (as Ayn Rand would say) check your premises.

One more oddity: Gurdon writes that Huck Scarry “has perpetuated his father’s legacy by completing unfinished manuscripts as well as producing Richard Scarry-style books of his own,” and she welcomes the prospect of a new book about Lowly Worm based on some leftover drawings of Scarry’s, because (get your eyerolling muscles ready): “In our sedentary, touch-screen era, young children surely need the industrious and purposeful animal role models of Richard Scarry’s busy world more than ever.”

Has she seen any of these “Scarry-style books”? The ones I've come across are a much bigger threat to the author’s legacy than expurgated editions of his classic works. My son had a “Richard Scarry” counting book that was clearly cobbled together from existing doodles and drawings, with no attention to intelligibility or design. Every page was a mess—not a rich collage of chaos like Scarry specialized in, but a low-quality imitation that, on closer inspection, was made up of the same image copied-and-pasted over and over. The “nine speedboats” the reader was invited to count were photocopies of each other, scattered haphazardly around the page. I couldn’t wait to get rid of it. Thanks to Huck Scarry et al., you have to look very carefully to make sure what you’re buying is authentic Richard Scarry and not some cheap cash-in on his good name.

I still do go out of my way to find the real thing, because I have fond memories of poring over Best Word Book Ever and all the rest when I was young, and I love being able to revisit Busy Town with my boys. Bowdlerized or not, Scarry’s work is still fun and funny, and it’s a very inviting escape from the world of adulthood.

"Give it something to eat": Pope Francis, lactivist