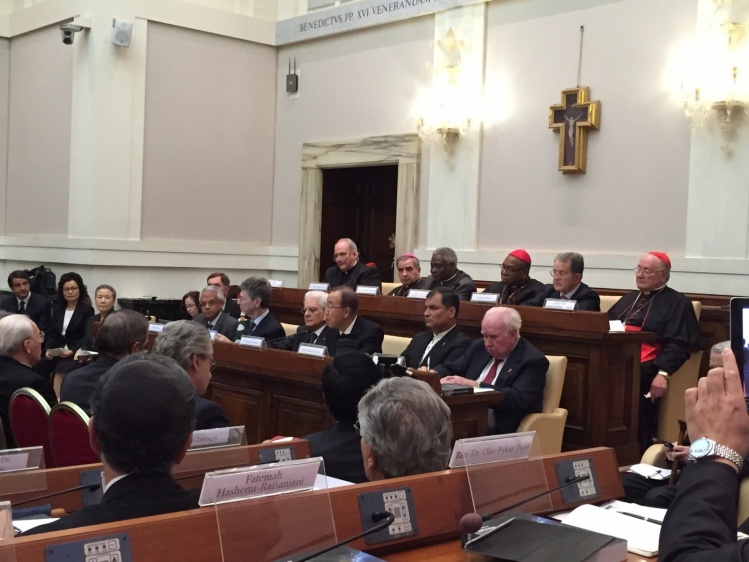 This past Tuesday, I had the great joy and privilege of attending a Vatican symposium entitled “Protect the Earth, Dignity Humanity: the Moral Dimensions of Climate Change and Sustainable Development”. Three separate groups sponsored this gathering: the Pontifical Academy of Sciences/ Social Sciences, the UN Sustainable Development Solutions Network (housed at Columbia University’s Earth Institute) and Religions for Peace. It brought together a who’s-who of top climate scientists, development experts, as well religious leaders from the world’s major traditions - Christian (Catholic, Protestant, Orthodox), Jewish, Muslim, Hindu, Buddhist, and Sikh. There were also some business leaders present, plus two heads of state (President Mattarella of Italy and President Correa of Ecuador). And UN Secretary General Ban Ki-moon opened the symposium, fresh from his bilateral meeting earlier that morning with Pope Francis.

The purpose of this unique summit was to build momentum ahead of the pope’s much-anticipated encyclical on the environment, to focus squarely on the moral dimensions of climate change and sustainable development – especially through its effect on the poor. It was remarkable and inspiring to see top scientists and top religious leaders singing from the same songbook – the religions affirmed the science, and the scientists affirmed the moral dimension of the problem. As Ban Ki-moon said in his speech, “there is no divide whatsoever between religion and science on the issue of climate change”.

Cardinal Peter Turkson followed Ban Ki-moon with a powerful and passionate speech. Turkson delved into the ethical roots of the problem – a society that defines itself by consumerist and monetary values, underpinned by an ethos of selfishness and individualism, is a society numb of the cries of the poor and oblivious to the onslaught against nature. Showing his roots as a scripture scholar, he notes that the lesson from the Garden of Eden still rings true today – “pride, hubris, self-centredness are always perilous, indeed destructive”. And the Hebrew-Christian scripture is unambiguous - the gift of the land is a gift of all.  Quoting Isaiah, he notes that “the earth languishes for the sins of man”.

Turkson called for a course correction – toward the idea of sustainable development, a holistic and ethical approach that links economic prosperity, social inclusion, and protection of the natural world. This in turn calls for an all-embracing moral imperative, “an enfolding charity that radiates outwards from self to others, from those alive today to those not yet born”. It calls for a “full conversion of hearts and minds, habits and lifestyles, structures and institutions”. And it calls for the international community to take action at the three major conferences this year – financing for development in Addis Ababa, the adoption of the sustainable development goals in New York, and the final chance for a serious and binding climate agreement in Paris.

Other religious leaders echoed Turkson’s message. The eloquent Rabbi David Rosen noted that the earth belongs to God, and that we do not have ownership over it in a permanent sense. In the biblical ideas of sabbatical and jubilee, he sees the basis of sustainable development – respect for the physical environment, affirmation of human dignity, and emphasis on economic viability.

Olaf Tveit from the World Council of Churches talked about hope—that owing to our belief in the resurrection, sin and death will not have the last word. He called for the empowering of young people to spread this message of hope.

Din Syamsuddin, head of a major Islamic organization in Indonesia, called Islam a “religion of nature”. He noted that in Islam, all things in heaven and earth belong to God, and human beings only borrow from God – they never truly own.

Representing Hinduism, the ascetic Swami Theertha noted that the whole world is a house of God, and we live here by God’s grace. In his view, the only real solution to our problems is a spiritual solution.

Speaking from the Buddhist tradition, Kosho Niwano noted that everything we receive is a gift from nature, and that our lives are fully interconnected, sustained by web of all that exists. In her view, we need to return to “our true self, our original hearts and minds”, recognizing that we are sustained by the universe and have been blessed by what we truly need.

For me, one of the most compelling interventions of the day came from Cardinal John Onaiyekan, the archbishop of Abuja. Onaiyekan talked about how climate change is playing out in his native Nigeria. He noted that, due to devastating drought in the Sahel region of west Africa, the Sahara desert is expanding southwards, and Lake Chad – once a great lake – has now practically dried up. This is prompting the pastoralists to move their cattle further south, encroaching on farmland. Too often, the result is violence and conflict – made worse by the fact that most of the pastoralists are Muslim and most of the farmers are Christian. Onaiyekan also criticized the oil industry in Nigeria, and how it is contributing to environmental destruction – he even called it a crime against humanity.

The day had one sour note. Our summit clearly had some of the US-based climate denialists running scared. One group, the Heartland Institute, decided to come to Rome to hold a press conference in a hotel just outside the Vatican, to educate Pope Francis on climate change! They managed to infiltrate the Vatican as part of the press group, and even tried to sabotage the press conference with Ban Ki-moon. The Vatican subsequently evicted them.

This in itself was not bothersome. This kind of idiocy only makes the denialists look like loons. But these people have a good grasp of how the US media works –the kneejerk effort to provide balance, no matter how nonsensical the arguments. And nearly every media story did indeed report about Heartland. But they did not mention that this group is funded by the fossil fuel industry, including the Kochs. They did not mention that 20 years ago, the Heartland Institute was being funded by the tobacco industry to show that there was no evidence linking smoking and cancer – using the exact same pseudo-scientific arguments that they are now deploying against climate change. This wicked campaign of misinformation – centered on personal attacks – is shown clearly in the compelling Merchants of Doubt documentary.

But at the end of the day, the Heartland Institute provided nothing more than a tragicomic sideshow. The summit itself featured some of the world’s top climate scientists, who demonstrated quite clearly that anthropogenic climate change is very real and very harmful, especially to the world’s poorest people.

The final declaration states in no uncertain terms that “human-induced climate change is a scientific reality, and its decisive mitigation is a moral and religious imperative for humanity”. It notes that we have the technology, the financial means, and the know-how to move to low-carbon energy systems. We now need the political will. Hopefully, a cascade of moral and religious voices will make this more likely.

How Did We Get Here?