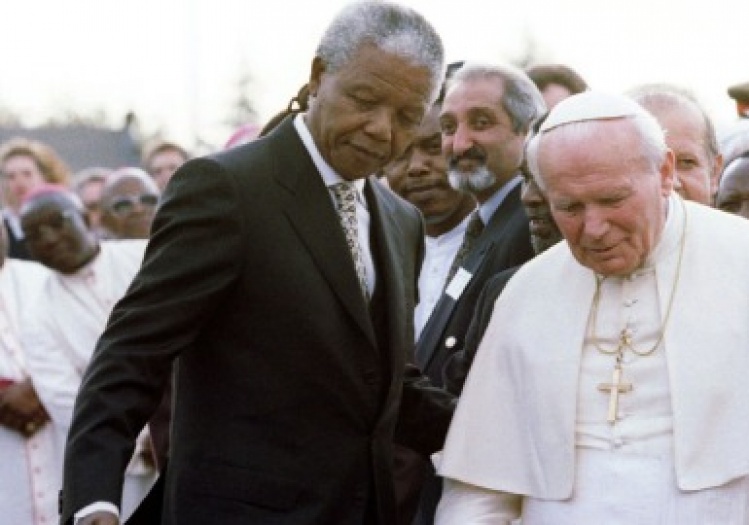 Euphoria was the word that best summed up the mood in South Africa last month when world leaders assembled for the presidential inauguration of Nelson Mandela and his two deputies. South Africa had ceased to be the pariah of the world. UN Secretary General Boutros Boutros-Ghali formally welcomed the new South Africa at the inauguration lunch, and Douglas Hurd, British foreign secretary, intimated the country's rapid reincorporation into the Commonwealth. The days leading up to this felt reminiscent of the fall of the Berlin Wall. Barriers were coming down all over the place, culminating with the opening of the National Assembly on May 9 when Mandela crossed the floor to embrace Mangosutho Buthelezi of the Inkatha Freedom party and then proceeded to greet General Constand Viljoen whose Freedom Front had won sufficient votes to fight in Parliament for an Afrikaner volkstaat (homeland).

South Africa was a nation ready to celebrate. There were two prevailing emotions. The first was relief, intense relief. Whites in particular had been stockpiling goods—ammunition, tinned foods, bottled water, and household items—ready to barricade themselves against power failures or whatever else might hap­ pen when the blacks took over. But after years of tension and violence, weeks of pervasive media coverage of the election campaign, and then the extreme Right bomb attacks immediately preceding the election, at the end of the first day of voting on April 26—set aside for the old and infirm—the country heaved a huge sigh of relief. The election had begun and there had been no conflagration.

This gave way to the second emotion: sheer joy. For the majority who voted for the first time, there was willingness to stand in lines all day if necessary, and even in some areas to come back again the next day where ballot papers had not been delivered. The media honed in on octogenarians whose lives had been fulfilled by putting their first cross on a ballot paper. I even found a white woman who felt this had been her first free vote, that only now had her vote really counted.

But while many South Africans were ecstatic about their liberation, the experience was not the same for black as for white. For blacks there was the expectancy of imminent improvements in their lives, and a full sharing in the resources of their country. For whites it was liberation from guilt, and, accompanying this, the relief that nothing much had changed. On the television there were the same reassuring white commentators, along with a few black faces. The news is still presented from a largely white perspective. In Parliament—and in the cabinet—there is the comfortable assurance that F.W. de Klerk of the National party (NP) is there to oversee proceedings and Derek Keys continues as finance minister, ensuring there will be no drastic change in economic policy. Even the entrance of an imbongi (praise singer) in traditional African dress at the opening of Parliament could be absorbed into white consciousness as a new craze.

It has been little noticed that while de Klerk talks about forgetting the past, Mandela speaks more about forgiveness; indeed he stresses the importance of knowing the past. While he is prepared to take the NP's claim to be a new National party seriously and to applaud de Klerk for the changes he has initiated, Mandela, in one of his speeches on inauguration day, reminded his audience that not so long ago de Klerk had chided the late Dannie Craven and other members of the South African Rugby Board for going to Lusaka to talk to Mandela's African National Congress (ANC) in exile.

In this, Mandela may be echoing one of his new cabinet members, Professor Kader Asmal, who, in his inaugural address as the first chair in human rights law in 1992, spoke of the crucial importance of knowing the past in order to understand it, and as part of a cathartic process of working through it to mend individual and collective broken psyches. At Asmal' s University of the Western Cape (built outside Cape Town as a segregated institution for colored students), the Mayibuya Centre has been set up as an apartheid museum. Conceived by the Vice­ chancellor, Jakes Gerwel, now appointed to head President Mandela' s staff, its purpose is to recover the lost history of black South Africans.

South Africa has a formidable task of physical reconstruction—given 40 percent unemployment, 60 percent illiteracy, and millions of homeless as well as the rebuilding of lives broken by injury, bereavement, and loss of property, particularly in KwaZulu­ Natal and parts of the Transvaal. For this the ANC has proposed an expensive reconstruction and development program.

But there are also issues arising out of the seeming miracle of peaceful change. In most newly independent countries there has at least been the symbolic overthrow of the old regime, even if it reappears as neocolonialism. The NP, whose acts of racism have been compared with those of Nazi Germany, has a history of which much is still to be revealed. There is to be no Nuremberg-like trial, but it will be necessary to know more, for example, about the "dumping grounds" where Africans in the thousands were transported from the Western Cape to wasteland areas, and where hundreds of infants died as a result. Parents of those children will need to come to terms with living in a country where the present leader of the National party remains influential.

There is the particular irony of Cape Town becoming the capital of the one province to vote an NP majority to its new provincial legislature. For decades the Cape had stood against apartheid through the preponderance of its liberal English­speaking white voters. Now there are fears of instability, and even talk of the province becoming an informal volkstaat, with Afrikaners from the Transvaal moving in (they are already buying homes there). Given the provincial NP leader, Hernus Kriel, until recently a most unpopular minister of law and order, and not known for diplomatic skills, and a rapid inward migration of blacks into squatter camps like Crossroads, the Cape is certainly a place to be watched.

The main concern is the possibility of racial tension between African and colored. The victory of the NP was blamed on the colored vote. As the largest population group in the region, coloreds were bombarded during the election campaign with NP advertising fomenting old fears of swart gevaar (black danger) and communism should an ANC government win.

The very existence of a colored population represents a legacy of white domination, an artificial "race" created by British colonialists in the nineteenth-century Cape when coloreds were classified as neither European nor native. While in urban areas colored homes, schools, pensions, and wages were better than those of Africans, coloreds were made to suffer all the indignities of petty apartheid as "non-whites." In Cape Town they lived in the shadow of the whites as a sort of underclass. While many looked to whites for protection, it remains little known that the colored community contained some of the most radical political thinkers, with an intellectual tradition of rejecting the very existence of "so-called coloreds" as a separate group and establishing of a tradition of boycotts, taken up by the United Democratic Front (UDF) in the 1980s.

In 1976, colored schoolchildren had demonstrated on the streets of the Cape Flats townships following the Soweto massacre. And in 1983 Mitchells Plain, an enormous colored township outside Cape Town comparable to Soweto, was chosen for the launch of the UDF.

But since 1990, with the release of Mandela and the unbanning of the ANC and other organizations, the prospect of real change of power has brought fear. And the community, never a cohesive one, has become still more unsure of itself.

This was illustrated on the Saturday following the election, a day of restlessness caused by the delays in the election results. With talk that there might be some news on the Grand Parade in central Cape Town, I made my way there to find a small gathering of people, most of them colored, divided into two groups by a line of peace monitors. On one side were about 500 ANC supporters, on the other perhaps 150 NP supporters. Nothing much was happening, but the peace monitors looked solemn, perhaps tired. The press was there, desperately looking for a story. Some ANC people started shouting "Hotnot, Hotnof”  (Dutch for Hottentot) at the NP lot, and the latter retorted, rather lamely, "Bushmen, Bushmen." The press got excited and brought out the microphones. Shortly afterward, as it was getting dark, the peace monitors broke their chain and went home and the group merged together.

Later, this event was reported in the media as a major incident of racial tension between African and colored, a sign of things to come. No one in the media seemed to have noticed that it was mainly coloreds who were shouting at one another. I asked a friend I had been with why she had joined in taunting the NP group as "Hotnot" when she herself had been subject to this abuse from whites in the past.

It was precisely because white nationalists, especially the police and farmers, had derided the coloreds in the past as Hottentots, that now the ANC was taunting coloreds who had voted for the NP for making themselves lackeys to their old oppressors. And why had NP supporters shouted back "Bushmen"? Because, my friend said, Africans used to call the coloreds Bushmen, "and now they say we are siding with the Africans."

The event told me a lot about the importance of having a new understanding of South African society, in this case for colored people themselves to recognize how they have been manipulated. The same friend spoke of what she wanted most out of the new South Africa as an understanding of who she is as a colored person. This itself will involve time for reconstruction out of the present environment in which the Khoi (Hottentots), the original inhabitants of the Cape who intermixed with white settlers and their slaves, are not yet acceptable as symbolic ancestors, and where the radical political tradition of the Cape has been to deny the validity of a colored group on intellectual grounds.

South Africa rejoices; its people need Mandela's charisma to lift their spirits out of the morass of forty-five years of apartheid and over 300 years of white rule. They need this for the long road ahead of them to break their way through old barriers to the new South Africa.

Rosemary Ridd, a social anthropologist and a member of Wolfson College, Oxford, is doing research this year in Cape Town.