Renewing My World: A Personal Reflection 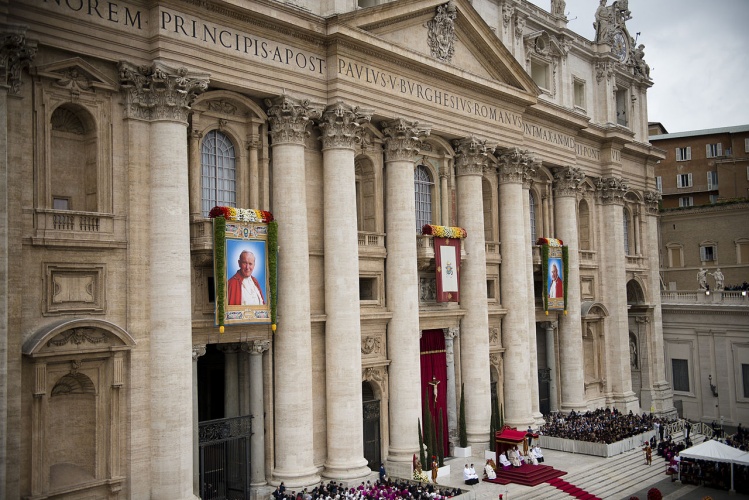 When I am discussing baseball players or musicians, I find it very appropriate and enjoyable to get into sparring matches about “who’s better?” Not so much with popes. And so personally, I find this dual canonization very gratifying. It gives us as a church an opportunity for gratitude, to say what it meant for these men to lead us.

I was minus-9 years old when Angelo Roncalli died. (So “I was not,” I supposed you could say.) But St. John XXIII fathered the Catholic world in which I grew up. Had there been no John XXIII, I suppose my Mass might still have been in Latin, my grade-school sisters in habits, and my lessons filled with the terrors of mortal sins and the dangers posed by associating with Protestants. It’s a counterfactual, so who really knows? It’s easy to stereotype (nostalgically or critically) “the pre-Vatican-II” church. All I know from my own experience is that John XXIII meant that I can never remember a time when somehow faith seemed like a museum piece, separate from life. Faith and life flowed together, in ways sometimes messy, sometimes deeply fruitful. I am grateful for that. I came to know John XXIII himself only in college, through stumbling across Peter Hebblethwaite’s biography. It was absorbing reading, the picture of the unlikely, kindly pope who surprised everyone and changed Catholicism. I later read the collection of “Xavier Rynne’s” columns from the Council itself, relishing how energetically and ingeniously the Church had made this huge step forward. And I read Pacem in Terris, a powerful, sweeping document that urged peace as a central mark of my college Catholic practice. Together with discovering Thomas Merton and Dorothy Day, I saw my Catholicism as this boundless, hopeful, challenging vision for the world.

My subsequent education happily demonstrated that Vatican II was not (and could not have been) a one-man show, as if it was the pope against everyone else. A couple generations of quiet innovation and careful (often ecclesially dangerous) work had gone on that made the Council’s achievements possible. But without John, there would have been no opportunity. John XXIII understood what many, then and now, do not quite get: the Church does not need to be paralyzed with fear, anxiety, and defensiveness. The Gospel is one of joy. As is fitting in this season of resurrection, we can embrace as John did the greeting of the Risen Christ: “Do not be afraid.”

“Do not be afraid” was also the signature of another pope, one of those aforementioned innovators that made the Council possible. If John made the world of my youth, John Paul was undoubtedly its leader. When I was just hitting 7 years old, news was the pope was coming to my hometown. Growing up in a Chicago neighborhood with a huge Polish population, a year after the election of this first Polish pope, my grade school geared up. I can still remember posting large letters in all the school windows that spelled out a greeting to the pope – if I remember correctly, his motorcade was scheduled to drive past our school on the way downtown. I thought this was pretty neat. But then again, I didn’t quite get it. Big names came to Chicago all the time.

What I didn’t realize as a 7-year-old was that popes were not just big names. They weren’t VIP’s or world leaders who traveled all over the globe. At least, they weren’t before Karol Wojtyla was elevated to the See of Peter. I still have to communicate to my students what a huge deal it was when Pope Paul VI, during Vatican II, went to visit the Orthodox Patriarch and then went on a pilgrimage to Jerusalem. Before that, popes didn’t leave Rome. But St. John Paul II shattered that idea – as he did so many others. He was an innovator in service of tradition.

If someone were to ask me to name what makes John Paul a saint in my mind, I would probably not name all the documents that filled my years of education, much as I love Laborem Exercens or Veritatis Splendor. Instead, I would turn to some of the boldest gestures of his papacy. His travel, his cultural expansion of the communion of saints, his gestures of solidarity with those of other faith traditions. And especially, his dramatic “apologies” on the eve of the millennium for the church’s failures and sins of the past – a communal “confession” which left the details of theology in the dust in favor of the urgency of trusting in God’s boundless mercy. These are the reasons why, whatever “side” one took in the battles over church politics, John Paul was beloved, consistently gaining favorable ratings from over 90% of Catholics throughout his papacy.

Given the length of his service, we are perhaps more acutely aware of the man’s failures as well as his successes. No doubt his charismatic leadership style worked best on the broad stage, but did not always lead to the best management practices. The constant drip-drip of clergy sexual abuse is no doubt the most notorious example. The personal bravery of John Paul’s later years of publicly suffering through frailty and decline might lead us to pause and reflect whether a courageous head-on confrontation with this scandal would have been an analogously-brave public ecclesial suffering.

But the point of canonization is not to declare someone perfect. He changed the world, accompanying me as I grew up. When I was 7, this new pope made his way to Chicago. In 2005, when I was 33, I was leading a group of students on a weekend field trip to Christian communities in Chicago when news of the pope’s death broke. After attending Sunday mass at Holy Name Cathedral, we drove to our last stop, the Sunday service at an inter-racial Evangelical Protestant community in the midst of the dire poverty of Chicago’s West Side. The church, led by a former football coach, Wayne Gordon (still called “Coach”), was a beacon of light in that community, and my Catholic students were wowed by the music, clapping, and general exuberance of the worship. But imagine my surprise when “Coach” began his sermon with a lengthy, heartfelt tribute to John Paul II. I knew in past ages, evangelical Protestant communities might have seen the pope as antichrist, and seen Catholics as “barely” true Christians (at best). Now here I was, at this bible-thumping place, and they were offering a stirring eulogy for the holiness of the pope at his passing. That’s my lasting memory and symbol for how this man truly did change the world.

Whenever I look back on the history of the Church and see some of the shameful men who sat in Peter’s Chair, I feel blessed to live in an age where popes shine with holiness. And it is fitting, too, that Pope Francis is presiding over this. The glow of holiness is, in the end, what matters. And it would difficult to argue with the committed holiness of any of these leaders. In their different ways – and all together – let them inspire us in our commitment to the Gospel.

(A lengthier version of this post appears at catholicmoraltheology.com.)