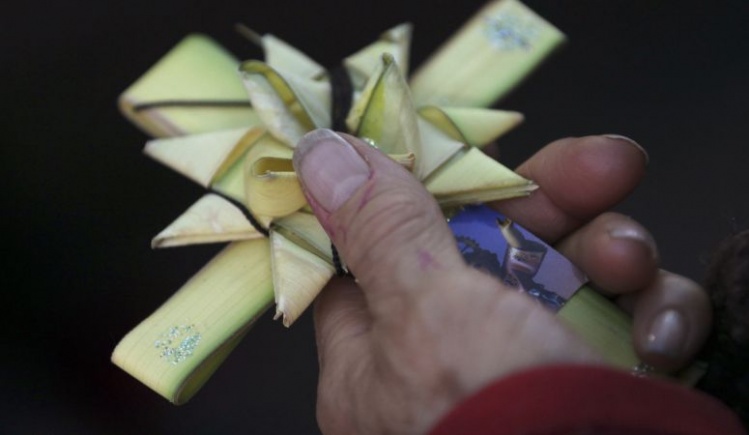 The day before Palm Sunday, my grandfather buried my grandmother in a soaked and blackened grave at Assumption Cemetery. His place would be at her side; already the marker stood with both their names engraved. It was very near the cemetery gate, as he wished, so the two of them could go for evening walks.

But there was no talk of twilight walks the day before Palm Sunday. Not much talk at all as children, grandchildren, and relatives to the third degree shivered under a makeshift tent. We huddled for warmth and strength around the old chief mourner, his eyes puffy and red.

On Palm Sunday we huddled in my grandparents’ warm and well-lighted dining room with its scrubbed linoleum floor, refrigerator, the small-backed chair in which Grandma had died, and the oversized table around which the family lived. Some of the third-degree relatives spilled over into the parlor; others fussed in the kitchen.

But the main attraction was in the dining room where paisanas from the old country cut and wove strips of palm into intricate crosses, flowers, braided baskets, and loop-de-loops. All around the table fingers wove in and out, while Grandpa with his hands folded on the table, his eyes shining, told stories about crossing the ocean seven times—twice free—about laying tracks for the Union and Pacific for twenty cents an hour, about marrying Grandma over in the old country and leaving her too soon to fight World War I, about returning with his buddies on a “freelough” and finding my father, then a little boy, trailing GIs for cigarette butts. When the war was over, they packed Grandma’s crocheted tablecloth and Grandpa’s Victrola with the loudspeaker into a trunk and immigrated to America with my father and his brother.

I left the weaving of palm and stories and went up to the attic. There was the trunk marked “steerage.” I sat on it, the child of immigrants, and thought about how my grandfather’s extraordinary memory was taking all of our rich history and weaving it into a gift for us. Grandma was present down in that dining room, and maybe we were doing this to remember her. And I thought about the Last Supper, how “Do this in memory of me” was more about Christ’s presence than about his absence. “Do this in memory of me” were not words dusted off some ancient ritual done once and for all. The “memory” was like a stamp, like the seal we say is part of Baptism, the sign of faith proclaiming that, at that last supper, we were in the mind of Christ. He set his seal upon our hearts, then gave us “Do this in memory of me” as a reminder that he has first claim on us. This is what we would commemorate in a few days on Holy Thursday.

The day after Palm Sunday was warm and sunny—a good day, my grandfather thought, to unearth his fig tree. Carefully, with a shovel as old as he was, he pulled away dirt from a six-foot-long grave, two or three feet deep. He stopped when something showed, bent down, and gently brushed away dirt to reveal the thin limbs of a fig tree. Slowly, Grandpa lifted it, careful not to disturb the roots. He quietly held it upright, while some of us filled in the grave and packed dirt around the base of the tree. He fixed a long stick to the skinny trunk and we all smiled. There, shooting out of every possible crevice, were miniature green leaves. Under all that buried winter ground there was life.

Published in the May 6, 2016 issue:
View Contents
Tags
U.S. Catholicism
The Last Word

Joan Sauro, CSJ, is the author of several books, including the forthcoming We Were Called Sister, whose title essay was awarded the prize for Best Essay 2014 by the Catholic Press Association.