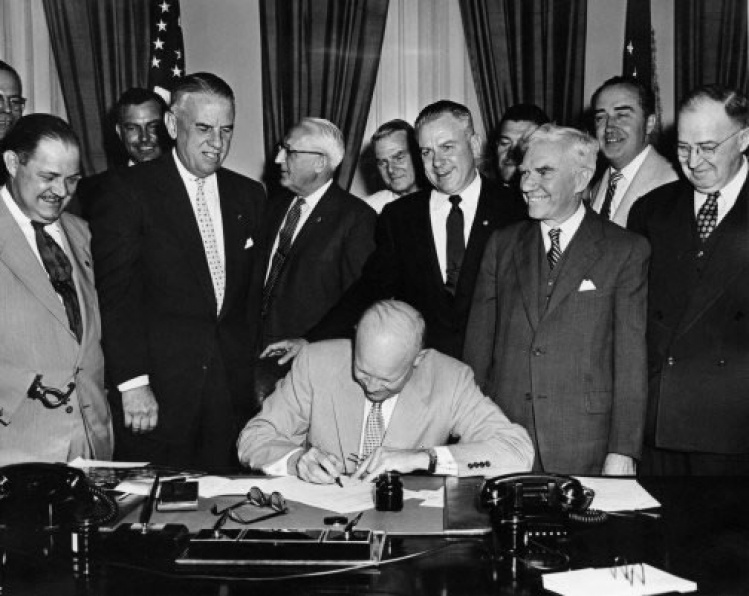 In the preface to the Gifford Lectures, Arnold Toynbee, in characteristic language, remarks that "we have been reminded of Religion by the quickening touch of Adversity." He adds that "this common experience is a serious call for a candid inquiry into the meaning of the glimpse of Reality that each of us obtains in the course of following this or that walk of life." And many another in our times, with a lesser gift for literary expression, has tried to say much the same thing.

What is true for the historian is true also, we may suppose, for those men in public life whom we are apt to call politicians. Thus in our own country we have watched the most extraordinary change during the last decade or more. The two topics which in our youth we were always warned against - religion and politics - have in fact become the closest of companions, although we cannot yet say friends. The lion has taken a place very close to the lamb.

A few months ago, for instance, we were supplied with a most impressive anthology, In God We Trust, by Mr. Norman Cousins, who had culled from their own writings the religious dispositions of the Founding Fathers. While we may not be sure that it was the intention of the author, it was possible to gather the impression that these obiter dicta were in fact a kind of apologia which would convince the contemporary mind, in case it might have some other notions, that these early Americans were basically religious, with attitudes sympathetic to religious principles and to religion itself. For the thoughtful reader, however, and one even slightly informed in theology, the effect is apt to be quite different. It is difficult to avoid the conclusion that the Founding Fathers were almost all theologically illiterate. We can be grateful, of course, that their understanding of political realities was vastly more advanced than their understanding of religious ones.

This is not so severe a stricture as might at first be supposed, for the Founding Fathers were no more than men of their own times. Their naive approach to Christianity, even in the forms in which they were permitted to know it, can be explained and even excused in terms of their intellectual and religious environment. If they were repelled by certain forms of Protestantism which they knew, and repelled too by Catholic Christianity, which they knew hardly at all, they were reacting in both cases as we might expect of those who had wearied of the Reformation and its splintering effects and who had no reason to know anything but the least favorable about the Roman Church. They were not assisted by the fact that during their lifetimes the Catholic Church was passing through a critical period from the effects of which, as we recall, some observers were inclined to think she would never recover.

A century and three quarters later, however, the climate of America is quite different, and indeed Mr. Cousins' book is itself an indication, or should we say a symptom, of this precise change. What our fathers in the American society were pleased to get along very nearly without or at least to restrict to personal terms, the sons of their sons are eager to flaunt in public expressions of piety or piosity. It may be the "touch of Adversity" mentioned by Toynbee which has changed the complexion of the times, but whatever the cause, there is evidence from the highest plateau of American political life down that religion is now considered to be the kind of commodity which has some appropriate and beneficent effect in the area of politics. To be sure, cynical minds have already suggested that the new religious interest in high places is merely another example of the ability of the politician to use everything about him for some professional advantage. Since, however, it is not possible to be a reader of consciences, we should, lacking evidence to the contrary, accept as in good faith what has become a very apparent reality.

There are observers who will suggest that this phenomenon is something that has come to the front only in the present Administration and that it is likely to die with it. President Eisenhower, whose military background might seem to suggest something quite different. has unashamedly prayed in public and often sought divine guidance; moreover, his prepared addresses frequently refer to the Deity, as latterly in his recent U.N. address at the emergency Middle East meeting. Still, his predecessor, Mr. Truman, had on occasion shown similar dispositions. Who can forget his remarks a year after Hiroshima? He said then: "The atomic bomb ended one age and began another, a new and vital age of the soul." If this may seem uncharacteristic. it is profound enough to merit our recollection, and our serious reflection, more than a dozen years after its utterance.

Balanced against the Presidential concern for religious realities, we must mention the expressed attitude of men like George Kennan and Dean Acheson, who have given careful expression to the views of many other contemporaries within government and outside of it in testifying to the irrelevance of moral (and spiritual) principles in national decisions on such matters as foreign policy. Whatever may be the personal religious feelings of the statesman, they feel, his specifically political decisions are made in the context of a reality untouched by moral judgments. The times are too perilous, in this view, to allow for the luxury of conscience in matters affecting world history, and the handicap of morals in this amoral world is unacceptable. It might be difficult to imagine Mr. Dulles accepting this position, but it is likely that it is still the prevailing view among the engineers of politics on other levels.

We may be able to understand the problem more clearly when it is seen in concrete actions, since in these days of speech-writers and research assistants one man's words are apt to find themselves in another man's mouth. At Quemoy, for example, are we measuring our assistance in terms of fight or in terms of power? Are Chiang and Formosa rightfully worthy of support or is southeast Asia in danger? In the Middle East, are we preeminently concerned with justice or oil? On the nuclear tests, are we responding to the moral concern involved or the mounting world opinion? Surely, for many of us, the answer to these and similar queries is that we are measuring political, military, strategic and other factors in all these decisions and at the same time assaying their morality. The moral element is not something added to the actions of men and nations, it is inherent in the act, its circumstances and the intention of those acting. To choose to disregard the moral note is not to remove it.

The Founding Fathers, we have said, were theologically illiterate, but they were not at the same time morally without moorings. A certain vestigial morality remained even among those who had lost anything resembling Christian faith. The picture of Jefferson eutling the Scripture for moral slogans appears naive to the believer but he surely felt that he was taking from it only that which was practical and, perhaps because practical, true. In our times the man in public life is not merely theologically unlearned but he is morally bewildered. Not ten men in politics in Washington today could tell the difference between the theologies represented by the Episcopalians, the Baptists and the Presbyterians, to classify only the three last Presidents, and probably eight of these ten would be willing to say that a man's morals concern his personal but not his public life.

What we are witnessing in the new religious interest in American politics and the appeals to the Deity is actually an attempt to find just where and under what heading we can introduce righteousness into our national life. This is not something we may ridicule or scoff at for, as Toynbee remarks, the times are forcing it upon us. The pressing question is whether we can afford to work haphazardly at the project, now trying this manner and now another, until in the end the whole ineffectual business is checked as, by that time, either unnecessary or unworkable. The Scriptures remind us that "not everyone who says, Lord, Lord, shall enter the kingdom .... " We cannot then be satisfied with appeals to God or the mention of His name in public documents, encouraging as this may be to religious people. "Only those who do the will of My Father Who is in heaven will enter the kingdom of heaven." This is a vastly more serious concern and, obviously, one immensely more difficult.

Just as the Founding Fathers were the men of their generation, so too the present fathers of the republic reflect the times in which they live. If they are pious where we might wish them to be spiritual, or if they are moralizing without a true sense of morals, all this should not strike us as strange when we examine the environment which has produced them. The "Adversity" of two wars and the frigid facing of East and West which has followed upon these conflicts have thrust upon our generation problems of new proportions, and they have forced us to test, while our fathers were permitted to ignore, the ultimate meaning of man and of life.

Some continue to hold and to hope that the old answers--arms, diplomacy, allies and the rest---are quite enough; these people, no matter what label they bear, are the true reactionaries. Some others are striking out in new directions with courage but without point or pattern; these are the adventurers and some of them surely will find the way. Some others still, however, already see our struggle as one for survival, and they are taking anew the measure of man and the meaning of his existence. They will not be afraid to acknowledge the divine working in history, nor will they be loath to give it place. Providence, like the Spirit, will hang over the bent world even when men push it toward disaster. But in all our ventures, to discern and to seek the will of the Creator can alone bring that harmony that is truly peace.