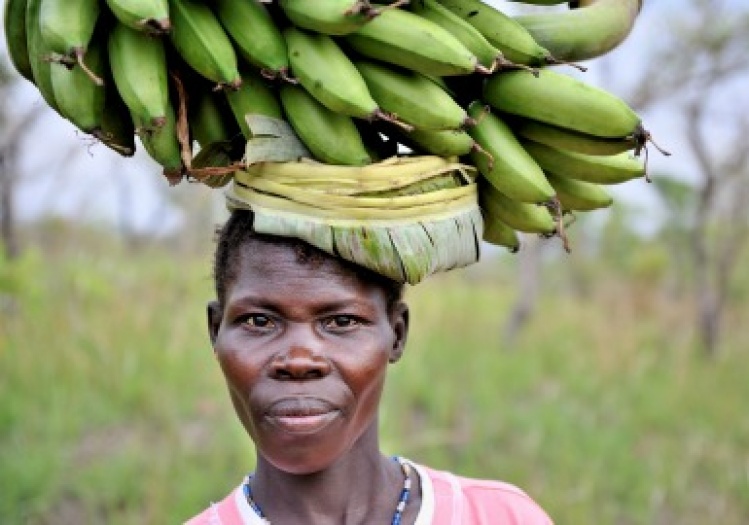 The Democratic Republic of the Congo (DRC) is home to 70 million West Africans. One of the countries richest in natural resources, it is also one of the least economically developed. As is often reported in the West, regional and civil wars, political corruption, and poverty are endemic.

The dominant natural features of the DRC are the Congo River (which arches through the eastern, northern, and western sections of the country on its way to the Atlantic) and the Congo Basin. This basin forms the major land area of the country, and after the Amazon, is the largest rainforest on the planet. The hydroelectric potential of the river remains largely untapped, while the primary source of fuel for the Congolese continues to be charcoal, made from forest products. The making of charcoal, coupled with largely unrestrained activity by logging and mining companies, has led to an alarming decrease in the DRC’s forests, about .6 percent a year. Yet the basin is also home to more than twenty-seven thousand species, many of them unique to the area. This biodiversity and the forest’s ability to capture carbon and release oxygen make it an invaluable global resource.

Eighty percent of Congolese are subsistence farmers who supplement their livelihood with hunting and gathering. Tens of millions live on less than $1.60 a day. In the past, traditional methods of farming were sufficient to meet most families’ needs and to keep the ecosystem healthy. When new fields were required, a more remote section of forest was burned. It would later revert to bush as the villagers moved elsewhere. But today, with the pressure of a rapidly expanding population, unregulated mining and logging, and accelerating climate change, the ecosystem doesn’t get the chance to regenerate itself.

Local efforts to attack this problem are making surprising, if fitful, progress. In 2002, the Congolese Ministry of the Environment, Conservation, and Tourism, which oversees ecological matters, began developing policies to preserve the forests and a new Forestry Code was promulgated. It affirmed the right of local communities to their “customary” lands. Tribes and clans could apply for legal recognition in their traditional areas. Once recognition was granted, the tribe and its land were protected from further exploitation.

The Forestry Code has in turn promoted community forestry, or “agroforestry”—a form of managed crop rotation in which trees (to be used for wood products and charcoal) are alternated with food crops like manioc and maize. Acacia trees, which are not native to the Congo but grow quickly and make excellent charcoal, are now vigorously cultivated. By establishing a fifteen- to twenty-year rotation cycle, a community can maintain its tracts of forest in healthy condition while meeting the group’s economic needs.

How to make this approach sustainable across the vast reaches of the DRC remains a problem, especially because of the nation’s poor infrastructure. Some successful pilot projects have been established, but in most regions the work is slow, impeded by corruption and the government’s fiscal problems. Recently the Ministry has begun to assign the work to local nongovernmental organizations.

One of the more successful projects began nearly twenty years ago in the Mampu region. When I visited early this year with a group of observers the village chief carefully examined our letters of introduction before allowing us into the area. Near the village, the forest trees were towering and there was thick vegetation. Further on, acacia forests rose at varying stages, some freshly planted, others fifteen years old and rich in wildlife. Finally we found cleared areas where crops were being cultivated and charcoal was being produced.

The Mampu project is fully managed by the local community. Other efforts have not fared as well because they lacked leaders with an eye trained on the needs of the local population. In Congo the first priority is to win over the local chief. Once he’s on board, the people he leads will be more likely to follow.

The concepts of ecological equilibrium and sustainability are not foreign to Congolese, who have a deep conviction that the land belongs first and foremost to their ancestors. The responsibility of the present generation is to honor them. One doesn’t work the land simply for personal enrichment but to participate in this cycle of the generations. Animals and plants are respected for the same reasons.

People in the DRC are aware that the climate is changing. Familiar species are becoming scarce, temperatures are rising, the rainy season is shorter but more intense, and the times for planting and harvesting have changed. More Congolese are now coming to accept that deforestation has contributed to these problems—and that is reason for hope.

Mary Frohlich, RSCJ, is associate professor of spirituality at the Catholic Theological Union in Chicago.