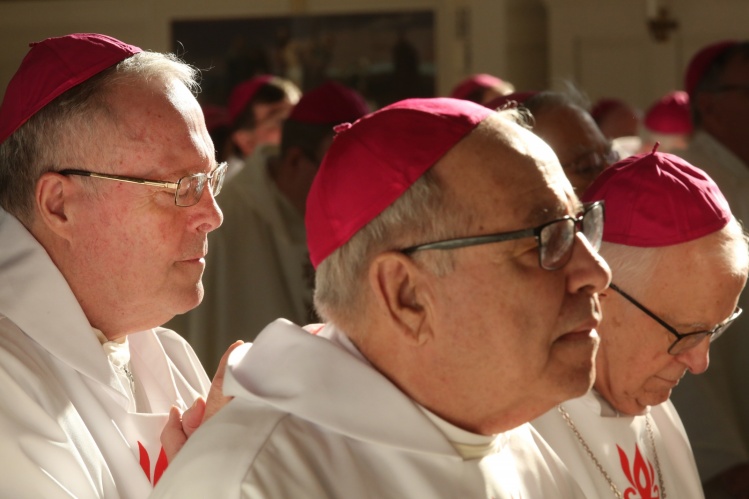 Confronting the most profound crisis the Catholic Church has faced in centuries, U.S. bishops are meeting for a week-long spiritual retreat at Mundelein Seminary outside of Chicago to grapple with how clergy sexual abuse and a culture of cover-up have damaged their moral credibility. Pope Francis came up with the idea, urging bishops to go on retreat when he met with a delegation from the U.S Conference of Catholic Bishops at the Vatican in September. In a sign of how important the pope considers this unusual gathering, he sent Fr. Raniero Cantalamessa, preacher of the papal household, to direct it.

I’m not completely unsympathetic to those who argue we could use less prayer and more action from church leaders. Lay Catholics have every right to be angry and impatient with the episcopal malpractice, the sins, and the crimes committed by those who are supposed to be shepherds. I’ve also grown weary of the incompetence, the ugly scapegoating of gay priests, and the tone-deafness of bishops who seem to cast blame on everyone but themselves for the wreckage at their feet. But any authentic reform and renewal, whether personal or institutional, has to start with discernment, repentance, and conversion of heart. Dismantling a clerical culture that leads to abuse of power can’t simply be a technocratic endeavor, a managerial shuffling of the deck. In a lengthy letter he sent to the bishops on retreat, Pope Francis describes a “crisis of credibility,” calls for a “new ecclesial season,” and underscores core themes that have characterized his papacy since the beginning.

A few days of prayer and reflection won’t save the church or magically change bishops, but we could do worse now than beseech the Holy Spirit to set the church on a better course.
sharetweet

“Loss of credibility calls for a specific approach, since it cannot be regained by issuing stern decrees or by simply creating new committees or improving flow charts, as if we were in charge of a department of human resources,” Francis writes. “That kind of vision ends up reducing the mission of the bishop and that of the Church to a mere administrative or organizational function in the ‘evangelization business.’ Let us be clear: many of these things are necessary yet insufficient, since they cannot grasp and deal with reality in its complexity; ultimately, they risk reducing everything to an organizational problem.”

This is quintessential Francis; during his first in-depth interview as pope in 2013, he made the same point to fellow Jesuit Fr. Antonio Spadaro:

“The structural and organizational reforms are secondary—that is, they come afterward. The first reform must be the attitude. The ministers of the Gospel must be people who can warm the hearts of the people, who walk through the dark night with them, who know how to dialogue and to descend themselves into their people’s night, into the darkness, but without getting lost. The people of God want pastors, not clergy acting like bureaucrats or government officials.”

In his letter to the bishops, Francis underscores that reform requires “not only a new approach to management, but also a change in our mind-set (metanoia), and our way of relating to one another and to the world around us...Without this clear and decisive focus, everything we do risks being tainted by self-referentiality, self-preservation and defensiveness, and thus doomed from the start.” A similar warning against self-absorption was at the heart of then Cardinal Bergoglio’s message to his fellow cardinals during the general congregation meetings that preceded the conclave, a time when cardinals can offer brief remarks that often summarize their vision for what qualities they think are needed in a new papacy. Denouncing what he described as the church’s “self-referential” tendency to close in on itself, the soon-to-be pope cautioned that this hunkered-down posture evidenced “a sort of theological narcissism.” I asked one bishop attending the retreat to describe his impressions. “So far, the pope’s letter has had the biggest impact on me,” said Bishop John Stowe, a Franciscan who leads the Diocese of Lexington, Kentucky. “He strives to teach the bishops and the whole Church the art of discernment, and asks us to be sure that anything we do has the flavor of the Gospel. He calls us to more genuine dialogue, including respectful disagreement, and to real fraternity and communion. This, along with humble service, is the path towards restoring credibility, not just better management or policies.”

While there are individual bishops such as Stowe who understand what it will take to renew the church, the American episcopacy as a body faces a daunting institutional challenge; many Catholics have lost faith in the ability of bishops to handle a crisis of their own making. Cardinal Daniel DiNardo, president of the USCCB, is supposed to lead while also fending off accusations in his own Galveston-Houston diocese that he failed to police abusive priests. He opened the fall meeting in Baltimore by announcing he had received late word that the Vatican wanted the bishops to delay voting on a series of proposals to address the abuse crisis, stunning all in attendance. The cardinal was visibly perturbed and described the request as “quizzical.” New reporting shows the cardinal wasn’t exactly forthcoming in describing what happened. In a letter to Cardinal DiNardo obtained by the Associated Press, Cardinal Marc Oullet, who leads the Vatican’s Congregation of Bishops, wrote that the bishops were blocked from taking votes on the proposals because leaders at the U.S. bishops’ conference hadn’t discussed them in advance with the Holy See, which received them just four days before the bishops met. “While DiNardo blamed the Vatican, the letter from Ouellet suggests that the Vatican thought DiNardo had tried to pull a fast one by intentionally withholding legally problematic texts until the last minute,” the AP’s Nicole Winfield wrote. “It is not surprising that Rome wanted a say in crafting the text, given the Holy See has exclusive authority to investigate and discipline problem bishops.”

There is a surreal quality about the church these days, with a faction of conservative Catholics (including some bishops) feverishly convinced that Francis is leading it toward schism and some cardinals openly contemptuous of this pope in ways that might have gotten them branded as heretics during the papacy of Benedict XVI. Meanwhile, those of us trying to keep the faith in the midst of attorney general investigations and raids on diocesan offices must also endure stories of a gay parish associate forced to resign after persistent harassment and articles about a priest who, in a funeral homily for a young man who committed suicide, managed to offend everyone who loved the kid. Our ancient church, bruised by centuries of scandals, has managed to survive sinful men in power, dark machinations, and fools who thought their selfish deeds were holy. A few days of prayer and reflection won’t save the church or magically change bishops, but we could do worse now than beseech the Holy Spirit, to ask a God who never abandons us to set this beautiful and broken church on a better course.