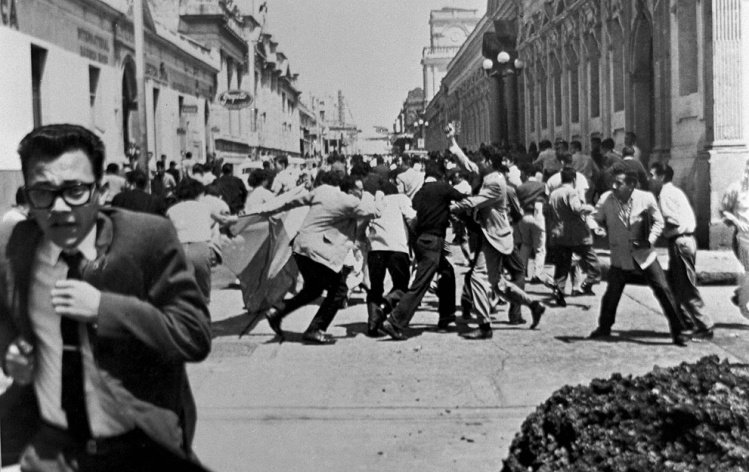 Students clash with police during the Guatemalan civil war in 1962.

Can a missionary be a guerrilla? Not in Guatemala and get away with it, as two Maryknoll priests and a Maryknoll nun recently discovered after being ordered out of the country and suspended by their superiors for collaborating in secret with the Communist Rebel Armed Forces. Father Thomas Melville, 37, and his brother Arthur, 34, who had worked for several years among the Indians in the backward mountain regions of the north, became convinced that little progress toward social justice could be achieved within Guatemala’s present political and social structure. Sister Marian Peter, working in the university in Guatemala City, the capital, apparently came to the same conclusion. Thus, they gradually turned to the underground guerrilla movement. The sad part of their suspension and eviction is that their superiors generally agree on the need for stringent social reform in Guatemala but felt that the three religious might be used by both Communist and rabid right-wing groups for their own purposes, possibly provoke U.S. intervention and finally endanger Maryknoll’s whole mission program in Guatemala and in six other Latin American nations.

Since missionaries operate in any country on sufferance of the civil authorities, they are not entirely free agents. They enjoy certain protections that are almost diplomatic in nature but they are handicapped in other respects: they are barred from political action, whether in the broad or narrow sense, and this restricts their efforts for social change. The situation is patently different with priest nationals, like Colombia’s rebel priest, Camilo Torres, shot to death while with a guerrilla band, like the three priests in Tucumán, Argentina, currently under fire as labor “agitators,” like the Brazilian clergy increasingly calling for radical reform even if, as Bishop Jorge Marcos de Ofiveiro of Santo Andre said, it means “a popular armed revolution.” They may all risk jail or death but not an international incident, as would an American, French, Belgian or German missionary saying the same thing.

The three Maryknollers in Guatemala, then, have raised questions that go far beyond the borders of one small Central American republic. As the Church breaks its traditional ties with the rich, the powerful and the military in underdeveloped areas like Latin America and lines up on the side of the poor and the oppressed, to what extent may foreign missionaries take part in the revolution? Are they, who are often in the vanguard of reform, doomed to stay on the sidelines, forbidden full commitment lest they implicate their religious congregation or nation? On the other hand, should any clergy or religious allow themselves to participate in violent revolution? The scandal of Christian complicity in past wars should encourage strong reservations now about the usefulness of violence as a solution to political and social problems. It may be that it is too late to prevent violent revolution, but the prospect of pistol-packing nuns and gun-running clergy is still a gloomy one.