Reasons to be hopeful about the LCWR and the CDF

By Mollie Wilson O'Reilly
Women in the Church

Writing for the National Catholic Reporter, Robert Mickens takes up the case of Cardinal Gerhard Müller, prefect of the Congregation for the Doctrine of the Faith and protege of the pope emeritus. Why, some have asked, has Francis left Benedict's man in charge of the CDF, when Muller's priorities seem so out of line with Francis's own?

As Mickens sees it, getting rid of Müller just a year into his appointment to the post "would have been seen as a serious criticism of the retired pope's judgment and wisdom." (Even the pope has to worry about being Fr. Bulldozer.) Of course, It may also be that Francis sees reasons to trust Müller in the job. But Mickens thinks it may not matter so much, because the CDF itself is becoming less powerful as Francis reshapes the curia and grants more power to the Synod of Bishops.

My column in the latest issue takes up Müller's remarks to the leaders of the LCWR (which Grant blogged about here).

His unquestioning acceptance of the USCCB's criticism of Elizabeth Johnson's Quest for the Living God was frustrating -- although it's not completely unreasonable for him to expect the U.S. bishops' committee on doctrine to do respectable work. What bothers me more is his insistence that, in light of that criticism, the LCWR's decision to honor Johnson could only be viewed as "a rather open provocation against the Holy See and the Doctrinal Assessment." And, he says, the fact that the sisters decided to honor someone the bishops had criticized just proves that the sisters need to get approval from the bishops (specifically, from Archbishop J. Peter Sartain, their CDF-appointed overseer) before they decide to honor anyone else. "Had [Sartain] been involved in the conversation as the Mandate envisions, I am confident that he would have added an important element to the discernment which then may have gone in a different direction."

The fact that Müller could not even imagine another way to look at the situation suggests just how difficult it will be for the sisters and the bishops to move forward together. He ended his remarks to the LCWR leaders by saying, "at this phase of the implementation of the Doctrinal Assessment, we are looking for a clearer expression of that ecclesial vision and more substantive signs of collaboration." But that collaboration always seems to require a lot more effort on one side than the other -- he told the sisters that the decision to honor Johnson "further alienates the LCWR from the Bishops," as though the fault for that alienation were entirely on their side.

Thus it's hard to be hopeful about the progress of this "collaboration," as I said in my column. But one reason I am is that the LCWR keeps sounding optimistic. "The actual interaction with Cardinal Müller and his staff was an experience of dialogue that was respectful and engaging," they said in a public statement after their April 30 meeting. In a longer statement to their members (quoted in Origins), the LCWR officials said, "in the honest, respectful, and engaging discussion that followed Cardinal Müller's opening remarks, we were able to offer responses that illuminated some of the perceptions about LCWR held by the Congregation for the Doctrine of the Faith."

That's good news. If the CDF is operating on the assumption that everything coming out of the USCCB's doctrinal office is trustworthy, they need someone to tell them otherwise. And if the sisters are going to examine their organization through Rome's eyes, it will be important to clear up whatever is preventing Rome from seeing them clearly. Archbishop Sartain may indeed help the LCWR in their discernment processes going forward. But discernment is not the sole province of the ordained, and the CDF can certainly benefit from the sisters' help, too.

Tags
Women in the Church

"Listen & Other Stories" by Liam Callanan 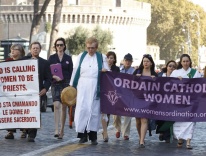 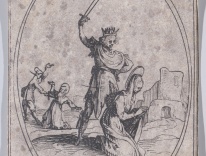 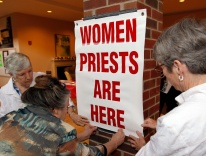