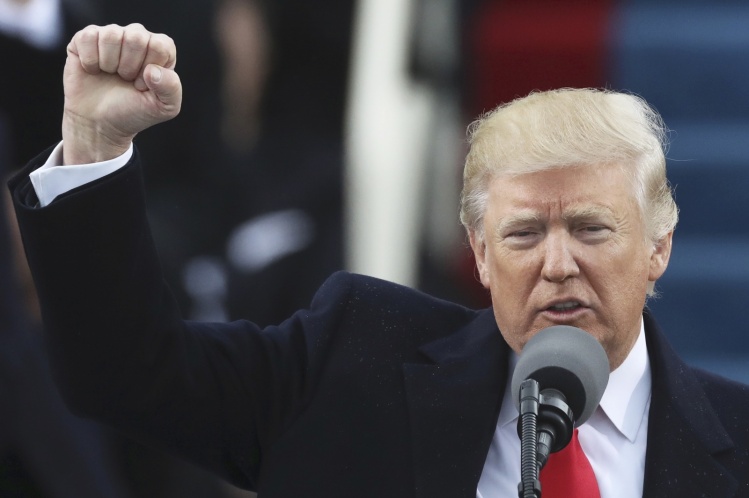 Donald John Trump intends to govern as the same fiercely angry man who inspired the discontented but aroused the worries and fears of so many other Americans.

In his inaugural address, he offered no outreach to those who had opposed him. There was no acknowledgment of the achievements of any of his predecessors and he spoke as if he were taking over a country on the verge of ruin. He blamed an ill-defined “establishment” for all of the nation’s troubles, and pretended that the progress of the last eight years, from the Great Recession to recovery, had never occurred.

Instead, he put forward an unrelievedly bleak view of current conditions, casting the richest nation on Earth as a victim of the rest of the world. “We must protect our borders from the ravages of other countries making our products, stealing our companies, and destroying our jobs,” he said. He would rescue us from this horror. “This American carnage,” he said, “stops right here and stops right now.”

Trump invoked a radical nationalism not heard from any president of either party in the post-World War II era. His doctrine owes far more to the ideology of European far-right movements favored by his senior adviser Steve Bannon than to the views of American presidents from Harry Truman, Dwight Eisenhower, and John F. Kennedy to Ronald Reagan, both George Bushes and Barack Obama.

“We will seek friendship and goodwill with the nations of the world,” Trump said, “but we do so with the understanding that it is the right of all nations to put their own interests first.” Some might see this as refreshing honesty about the true nature of foreign relations. But it is hard to escape that this sentiment suggests a man prepared to destroy international systems, built in large part by the United States, that have, on the whole, protected us and advanced our values.

And for those who worried about whether Trump is devoted to democratic values, there was this disconcerting sentence: “We must speak our minds openly, debate our disagreements honestly, but always pursue solidarity.”

Solidarity is a wonderful thing. But the word can look like a threat when used in a way that seems to subordinate free speech and open debate. More disquieting, the nature of solidarity would now be defined by a man who has shown only disrespect for his foes and for an independent media—and who has now assumed awesome powers.

It was hard to square Trump's self-consciously populist anti-establishment language with his Cabinet of millionaires and billionaires, including many of the sorts of investment bankers he denounced when appealing to the disheartened and abandoned in the factory towns and rural hamlets of Michigan, Wisconsin, and Pennsylvania.

And if power shifted decisively on Friday to Donald Trump and a Republican-controlled Congress, something else switched sides as well: passion. The political energy in the country is now on the side arrayed against Trump and his agenda. Republicans no longer have Obama as an object toward whom they can direct the country’s ire. With control of both elected branches, the GOP, including Trump, is the establishment.

The relatively small gathering at Trump’s inauguration was a hint of how shallow his movement’s roots might be. It’s true that Washington and its surrounding area stood solidly for Hillary Clinton in November, so there was no nearby crowd for Trump to mobilize. Still, a man who said his inauguration would break all records once again found his empty boasting refuted by reality.

In the meantime, Democrats and progressives are on the offensive in trying to save the Affordable Care Act and in opposing most of Trump’s Cabinet nominees—on policy grounds in some cases, on ethical grounds in others, and sometimes on both.

Since Election Day, Trump has done nothing to draw his former opponents toward him and much to insult them, deride them and push them away. His inaugural address will only stiffen their determination to contain the damage Trump could do and to restrain him in his use of power. Trump offered a take-no-prisoners message. His adversaries will respond in the same spirit.