It was gratifying that both the Washington Post (October 27) and the New York Times (November 1) published significant obituaries taking note of the death, on October 22, of James O’Gara, eighty-five, and sketching Jim’s thirty-two years as managing editor and editor of Commonweal.

The obituaries highlighted dramatic confrontations: Jim declaring that the entire staff would publicly resign rather than muzzle Commonweal’s opposition to Senator Joseph McCarthy, as one of the magazine’s then owners was urging. Jim rebuffing FBI agents threatening a subpoena if the magazine did not turn over material about Daniel Berrigan.

Such dramatic confrontations may have shown Jim’s mettle, but they do not really capture the character and achievement of a man who, at least in his demeanor, was decidedly undramatic and nonconfrontational, a man whose heroism was found not in those relatively rare challenges but in the harder heroism of week-by-week, year-by-year, manuscript-by-manuscript, page-by-page intellectual journalism. Jim’s was the heroism of St. Sisyphus, not St. Prometheus.

Jim was a laborer on behalf of the truth, sometimes on behalf of the stinging, brutal, blood-drenched truth, but far more often of the grayer, messier, less obvious truths, upon which faith and hope and human happiness can no less depend. If the editorials, articles, and columns that he wrote began in flashes of inspiration or ringing phrases or clever images, it was not apparent. What I saw at work was an ethically sensitive intelligence that fixed on a question or a problem, framed it in moral principles, diligently accumulated and weighed facts, and joined and mortised the whole into a direct, no-frills argument.

Jim was dedicated to the hard work of intellectual journalism but constitutionally immune to its vices-exhibitionism, exaggeration, or deliberate contrarianism. It is hard to think of him in the same journalistic universe as the notion of “buzz.” His strengths were steadiness, civility, fairness, sound judgment.

Which did not always sit well with the other and, in my time at the magazine, always younger staff members. At times, we wanted more fireworks, even if they might go off in our fingers. Editorially and institutionally, we wanted more risk-taking. Jim’s wartime combat in the South Pacific, we came to think, had given him enough exposure to risk-taking for a lifetime. Certainly, he and Commonweal publisher Edward Skillin considered the magazine too precious a legacy to take risks with.

In the 1960s, as the youngest of the young Turks in the office, I was on the fringe of these skirmishes and never found them an obstacle to working with Jim, who in 1978 welcomed me back to the staff and gave me a free hand as executive editor. Then, as in the earlier years, I repeatedly had the experience of advancing some bright new idea or dazzling theory I had encountered only to have Jim quietly pose the crucial question or raise the simple objection that had been too embarrassingly obvious for me, in my enthusiasm, to face. Call this wisdom or just call it good sense, it was the product of intelligence alloyed with humility.

Jim’s decades at Commonweal encompassed the cold war, McCarthyism, Vatican II, the election of JFK, Camelot, Cuba, the civil-rights movement, assassinations, urban riots, Humanae vitae, Vietnam, LBJ, the Berrigans, Eugene McCarthy, Nixon to China, Watergate, OPEC, Pol Pot, Khomeini, the Sandinistas, and five popes. He may have written, he estimated, up to a million words on such subjects. Undoubtedly he read, evaluated, edited, and corrected many millions more.

Those decades produced successive stereotypes of liberals and liberal Catholicism. It is truly comic to think of Jim in terms of any on them. Joe McCarthy accused Commonweal of doing “a great service to the Communist Party.” In fact, Jim and his fellow editors were unambiguously anti-Communist (in 1950 Jim wrote of Alger Hiss’s probable guilt) because they were unambiguously antitotalitarian, whence came their revulsion at McCarthy’s tactics. The editors’ liberal, self-critical Catholicism was disparaged as compromising and heretical. In fact, Jim was a model of traditional piety and practice. And finally, Commonweal, too, was stereotyped in the 1950s with the image of intellectuals as ivory-tower “eggheads” and in the ’60s with the caricature of elite “limousine liberals.” In fact, Jim was one of the working-class, Midwestern editors who came to the magazine in the postwar years: the son of a Chicago streetcar motorman, he had completed his college and graduate studies in sociology on the GI Bill. He and his wife Joan and their two daughters, Margaret and Monica, lived a lively but modest gardening-and-Girl Scouts existence on Long Island, a nightly commuter-train ride away from even a Manhattan taxicab, let alone a limousine.

Already, in 1978, Jim told me that he felt both physically and mentally worn down. In the ensuing years, he and Joan suffered a long series of minor and major ailments and accidents. Yet, before and after they moved to a retirement community in Catonsville, Maryland, Jim continued to serve on Commonweal’s board. (In the 1980s, he and Ed Skillin had blessed the magazine’s reorganization as a nonprofit foundation.) When the advances of Parkinson’s disease forced him to rely on a wheelchair, he still traveled with his family’s help to New York for meetings. Even more astonishing, from 1991 to 2002, he wrote a biweekly column on religious and civic issues for the Long Island Catholic, the diocesan paper of his old Rockville Centre diocese.

In March 1986, Jim wrote one of his last articles for Commonweal, a recollection of his lifelong friend and fellow editor John Cogley, who had died ten years before. It was direct, down-to-earth, full of detail, and deeply felt. His deceased companion, Jim wrote, “was a good man, a very good man-as colleague, as friend, as devoted husband and father.” Now, Jim, let those words fall on your own shoulders. Rest in peace. end 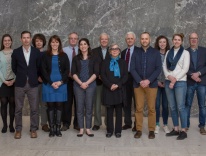 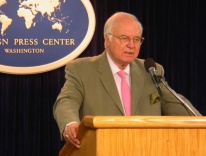