The Myth of Persecution
By Luke Timothy Johnson
Books 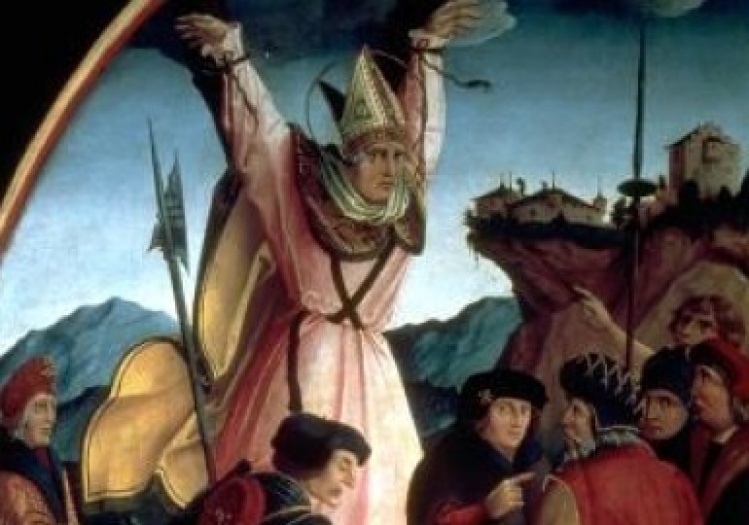 Historians of Christianity routinely speak of the period from the first century to the time of Constantine as “the age of martyrdom” or “the age of persecution.” Though these are useful designations, signaling a fundamental change in Christian fortunes—before Constantine, Christians were persecuted and sometimes martyred; after him, they enjoyed a privileged status—no one truly views the church’s first centuries as a time of unrelieved terror. Even the fourth-century Christian apologist Lactantius, who could barely suppress his glee over the death of persecutors (de Morte Persecutorum), recognized that Roman persecutions, while violent, were limited and sporadic.

Candida Moss, however, discerns in such formulations an insidious and pernicious myth of martyrdom, “based in a series of inaccurate beliefs about Christian history,” which erroneously posits a Roman Empire constantly in pursuit of believers. This myth, she says, holds that “only Christians are martyred, that being a Christian means being persecuted, and that the experience of persecution is a sign both that one is right and that one is good.” In her view, its “dangerous legacy” is the prevalence among Christians today of a persecution complex—an outlook that in turn fuels a willingness to demonize opponents and to resist any form of political compromise. Moss finds the rhetoric of martyrdom and persecution among contemporary U.S. bishops who actively oppose abortion, and among conservative political commentators like Glenn Beck, Ann Coulter, Newt Gingrich, and Rush Limbaugh. Exposing how this legacy “poisons the well of public discourse,” Moss makes no attempt to hide her allegiances. “Heaven help us,” she declares, “if this worldview, which pervades political commentary and activism as well as American religion, wins the day.”

A professor in the department of theology at the University of Notre Dame, Moss has published several scholarly monographs on martyrdom in the early church. But this book clearly aims to be read beyond the academy and to have an impact on contemporary political and religious discourse. The Myth of Persecution places Moss squarely in the ranks of historian-physicians who seek to heal what they perceive to be the ills of present-day Christianity through the therapy of revisionist history.

Like others working in this fashion, she blames a bishop—namely, the fourth-century ecclesiastical historian, Eusebius of Caesarea—for shaping a Christian consciousness that she regards as toxic. “Eusebius uses the history of the martyrs as a means of drawing battle lines for the established church orthodoxy against heresy,” Moss writes.

What we think is the truth about persecuted martyrs from the early church is in fact the retrojection of issues about orthodoxy from the fourth century when the church was more powerful and more centralized. And the church in the centuries that followed bought this retrojection hook, line, and sinker.

In a tone that can only be called prosecutorial, Moss goes about dismantling what she characterizes as the myth of martyrdom and the invention of the story of persecution. She argues, fairly enough, that Christians were not the first to have martyrs: from Socrates forward, Greeks and Romans told stories of noble deaths, and these traditions are found among Jews as well (notably in the account of the Maccabees). Moss shows how Christian accounts—beginning with Luke’s version of Jesus’ passion—employed elements of the noble-death traditions. Where a more forgiving observer might find such cultural appropriation benign, Moss sees distortion or even corruption. Concerning Jesus’ death in Luke’s Gospel, she declares that

the effects of Luke’s heavy-handed editorial work have been devastating for our knowledge of what actually happened at the time. The historical facts of what occurred during Jesus’s last days were overwritten with a theology of noble death and martyrdom, but this theology wasn’t originally Christian; it drew on widely held ancient beliefs about what constituted the good death.

The notion that theological interpretation disables the discovery of historical fact dominates the next part of Moss’s argument, “Inventing Martyrs in Early Christianity.” Beginning with some martyr accounts that are clearly legendary, she subjects even so-called authentic accounts, such as The Martyrdom of Polycarp and The Passion of Perpetua and Felicity, to withering criticism. Moss is relentless; any trace of literary influence, any historical implausibility, any internal inconsistency in such accounts leads to the conclusion that they are not historically reliable. Here is the heart of her argument: “If we cannot trust that these stories preserve the events precisely, then we cannot trust that any martyrdom stories do.” Sadly, in Moss’s accounting, none measures up: “none of the early Christian martyrdom stories are completely historically accurate.” As a result, she concludes, “we cannot be certain of what the martyrs themselves thought and said; we can only get at what their biographers want us to think”—and this matters, she insists, because “people are interested in saints...because of what they said and did.”

HEARING IN SUCH statements a loud echo of the quest for the historical Jesus, one might ask whether, in the case of those who gave their lives for the faith, “what they said and did”—and not the fact that they died as witnesses—is really the heart of the matter. It’s worth pointing out as well that Moss’s logic is skewed. Demonstrating the imprecision or inadequacy of a literary account does not thereby demonstrate the inauthenticity, historically, of the realities that account takes up. How convincing, for instance, are the Holocaust deniers who disassemble the Diary of Anne Frank in a tendentious attempt to discredit the Shoah? Do the discordant lucubrations of Oliver Stone make us doubt that John F. Kennedy died unintentionally in Dallas? Even Moss allows that “some people were cruelly tortured and brutally executed for reasons that strike us as profoundly unjust.”

Turning to the question of exactly how extensively persecuted early Christians truly were, Moss competently covers familiar ground, emphasizing the sporadic character of Roman persecutions before the time of Diocletian, and carefully distinguishing between persecution (“we are out to get you on any terms”) and prosecution (“we are out to get you if you break laws”). Asserting that the Romans harassed Christians less for their beliefs than because they were stubborn and sometimes subversive, she concludes that “things were much less serious than the shrill rhetoric of early Christians suggests.” In fact, “the Romans rarely persecuted the Christians, and when they did, they had logical reasons that made sense to any ancient Roman.”

The prosecution—Moss’s, not the Romans’—concludes with her analysis of “myths about martyrs.” For readers who might retain some lingering admiration for the martyrs, Moss deconstructs what she calls our “Sunday School” understanding of them, arguing that many martyrs were suicidal and sought violent death, that some were themselves violent, and that others used aggressive and violent language toward their opponents, “replete with fantasies of vengeful justice.” These are not “meek and forgiving saints,” but “quite literally, soldiers for Christ.” Their apocalyptic insistence that their persecution was sponsored by demons, Moss argues, informs the polarizing rhetoric she finds so grievous in contemporary religious and political discourse.

Clearly Moss’s study of martyrs has brought her to dislike them, and she wants us to feel the same—and to that end she spares little by way of disparagement. But the most discouraging aspect of this effort—as with so many other history-as-therapy exercises—is its fundamental irrelevance to the problem in contemporary discourse that she identifies. Certainly, one can agree with her that political polarization, apocalyptic forecasts, and charges of demon-possession are not usually helpful and indeed often injurious. But surely Moss overstates the matter when she blames the “myth of martyrdom” and the “invention of persecution” for such symptoms. One doubts that Newt and Rush are so profoundly shaped by the myths of Christian origins. Moss’s account of the “Sunday School” myth of martyrdom is itself a construction that serves as a straw figure for her argument. The language of demonization within Christianity, moreover, is demonstrably more pervasive and persistent than either the phenomenon of martyrdom or the fact of persecution (see “Powers and Principalities,” October 7, 2011).

Finally, for all its evident eagerness to address a readership beyond the academy, The Myth of Martyrdom bears the unmistakable stamp of contemporary academic values and commitments. The academy Candida Moss inhabits is a safe, well-lighted place that encourages the fantasy that other people are always reasonable; that persecution of the innocent seldom happens; that the willingness to die for one’s convictions is a form of pathology; that Rush Limbaugh is responsible for political dysfunction in America; and, most of all, that the history of Christianity—especially as manifested in its saints—is a long embarrassment from which reasonable Christians would gratefully be freed.