‘Womanpriest’
By Mary Kate Holman
Books
Women in the Church 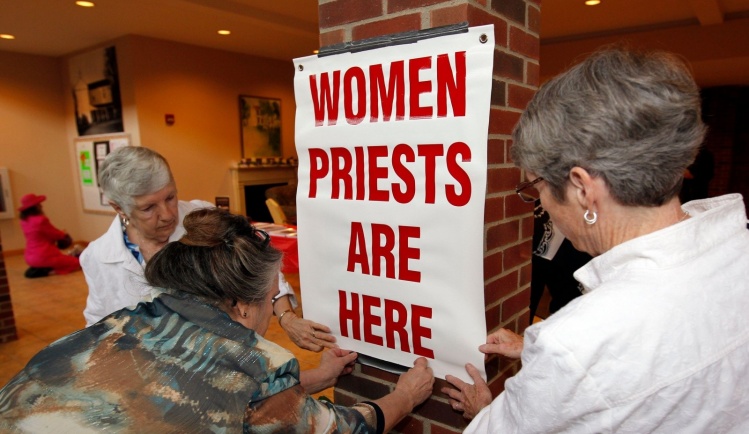 Putting up a banner before the Celebration of Ordination for Rosemarie Smead as a priest at St. Andrew’s United Church of Christ in Louisville, Kentucky, April 27, 2013 (REUTERS / Alamy Stock Photo)

In 2002, a group of seven Catholic women gathered on a cruise ship on the Danube River. There, in a ceremony led by three male bishops, outside the jurisdiction of any diocese, they were ordained as priests. According to the Church’s Code of Canon Law, this was illicit: only men can receive the sacrament of Holy Orders. But the women, who liken their defiance to an act of civil disobedience, insist to this day that their ordinations are valid. Known as the “Danube Seven,” they gave birth to a movement, active mainly in the United States and Canada, that has since ordained nearly two hundred womenpriests.

For all the attention it attracted two decades ago, the Roman Catholic Womenpriests (RCWP) movement remains poorly understood today. Fortunately, cultural historian Jill Peterfeso’s book, Womanpriest: Tradition and Transgression in the Contemporary Roman Catholic Church, has stepped in to fill that gap. Her ethnographic account, based on five years of interviews, digital questionnaires, and participant-observation of liturgies, offers the most measured analysis of RCWP to date. Neither sensationalizing the women as heroic renegades nor condemning them as fringe heretics, Peterfeso instead offers readers a nuanced portrait of their lives and worship spaces, letting them speak for themselves.

From the start, Peterfeso reserves judgment on the question of whether these women “count” as Catholic priests. That question, she writes, is ancillary to her work. Instead, Peterfeso shows how womenpriests can serve as a prism for rethinking broader issues in the Church. Gender and sexuality are among the most pressing, as are clericalism, money, and power. Each comes into sharper focus when seen from the relatively “marginal” perspective of the womenpriests, as the periphery of the institutional Church grants a clarity unavailable at the center.

Peterfeso shows how womenpriests can serve as a prism for rethinking broader issues in the Church.
sharetweet

Most of the sacramental practices of the RCWP would be familiar to contemporary Catholics. They gather parishioners around the Eucharistic table on Sundays, celebrate marriages, anoint the sick, and offer reconciliation. Though their ordinations trigger immediate excommunication, womenpriests insist on their identity as valid Roman Catholics; their institutional freedom from the Vatican enables them to reimagine certain elements of Catholic practice they find troubling. Gone, for example, is the requirement of priestly celibacy. Many womenpriests are mothers and grandmothers, and some are in committed lesbian relationships. They also take a more open, inclusive approach to Catholic sacraments, officiating at sacramental marriages for same-sex couples and offering the Eucharist to all, regardless of age, marital status, or religious affiliation.

Just as important as womenpriests’ service to local communities is their commitment to broader reform within the Catholic Church. As activists, they aim to revive the stalled debate on women’s ordination, moving it from the Vatican’s all-male Congregation of the Doctrine of the Faith to the “court of public opinion.” They do so, they claim, by speaking directly to the hearts and minds of lay Catholics, often through direct action. In their view, reforming the priesthood and the hierarchy requires something more radical than incrementalism or technocratic change: for RCWP a woman acting in persona Christi is not just a fantasy that could be, but a reality that already is.

Peterfeso notes that much of RCWP’s push for reform emerges from the wreckage of the sex-abuse crisis. She explains that the male priestly body has become a troubling symbol for traumatized laypeople, particularly victims, inspiring “fear and distrust” rather than fostering connection to Christ. Likewise, for many, the altar is no longer a sign of fellowship and communion but one of sexual abuse and exploitation. Female bodies, though, can testify to a “new potential” for the priesthood. Peterfeso witnesses one moving scene in which adult daughters vest their newly ordained mother, gently adjusting her priestly garments as she envelops them in a “giant bear hug.” This distinctly maternal act broadens the symbol of the priesthood to embrace a richer, fuller range of human experience—one that simply isn’t possible when ordination is limited to celibate men alone.

While womenpriests proclaim their resistance to clericalism at every turn, it nonetheless remains a serious challenge for their ministry. Peterfeso explains that the tension between their spiritual charism and institutional authority emerges constantly, often in seemingly mundane ways. Take the question of whether they should wear Roman collars, which presents a kind of Catch-22: “If [womenpriests] claim an indelible, essential transformation,” Peterfeso writes, “they fall into the clerical power trap they seek to avoid; if they do not claim a transformation, they may lose some of their ordained authenticity.” To blur these distinctions, at least during the liturgy, most womenpriests invite worshippers to co-consecrate the Eucharist. Their sacramental authority thus becomes not an exclusive, personal privilege but a communal gift.

Peterfeso also highlights the ways in which some male Catholic priests quietly participate in the RCWP movement themselves. A few serve womenpriests as unofficial mentors. There’s a limit, though, to what these relationships can accomplish institutionally. Because priests depend on Rome for everything from job placements to housing and health insurance, they are not free to reveal these relationships publicly. Nor can they voice public support for women’s ordination. (The recent laicization of Roy Bourgeois and the excommunication of Ed Cachia, both outspoken proponents, indicate how little the Vatican tolerates dissent on the issue.) While womenpriests must forfeit institutional legitimacy and security for the freedom to speak out, at least they do not have to keep secrets.

The example of womenpriests can help Catholics envision a Church that is at once more universal and capable of change.
sharetweet

Independence, though, presents its own set of problems. Because womenpriests cannot count on a diocese for support, they must rely on their own means instead. (Peterfeso notes that in one sense, this makes them “worker-priests.”) As a result, womenpriests tend to be predominantly white, upper-middle-class, and well-educated. Their poise and professional polish can certainly confer legitimacy and trust, and in some sense reflect their longing for recognition from Rome. But it also shrinks the pool of eligible candidates, decidedly less marginalized than some of the populations RCWP seeks to serve.

As I made my way through Womanpriest, my imagination flickered with the idea of a Church as inclusive and edgy as RCWP, but also as large, all-embracing, and well-financed as the global Catholic Church headquartered in the Vatican. A pipe dream, no doubt, but one that got me thinking. Why, I wondered, should these well-intentioned, pastorally minded, theologically articulate Catholics be forced to violate canon law and endure excommunication in order to respond to their vocations? The question is especially urgent now, as Pope Francis continues to call for synodality, a “journeying together” that requires parrhesia, or frank, honest discussion. How can that happen when certain questions are already declared off-limits?

Womenpriests are not a panacea for the Church’s every ill. But their inclusive approach to the sacraments, their experiments with democratic leadership, and their collaborative relationships with laypeople have already done a great service beyond themselves. Their example can help Catholics envision a Church that is at once more universal and capable of change.

Published in the May 2021 issue:
View Contents
Tags
Books
Women in the Church

Mary Kate Holman is an assistant professor of theology at Benedictine University.