From Buckley to Trump

How much is the first to blame for the second?
By Paul Baumann
Domestic Affairs 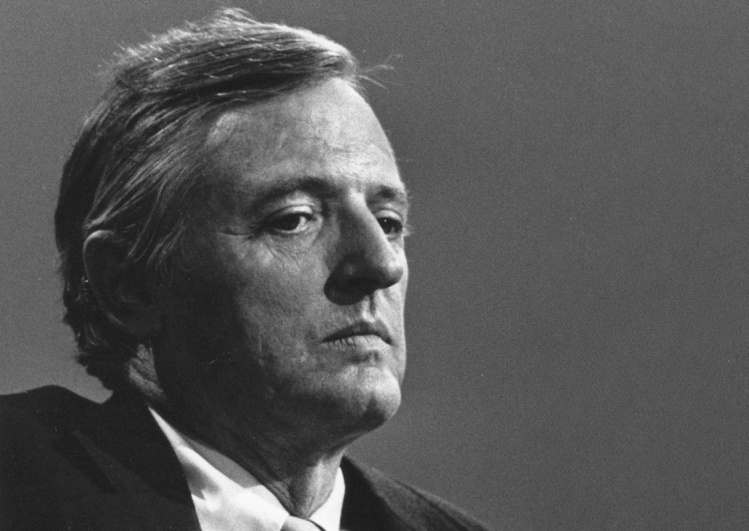 My parents subscribed to two magazines when I was growing up: Reader’s Digest and Newsweek. Why Newsweek instead of Time I don’t know. Perhaps Newsweek was cheaper. In any event, politics was rarely discussed in our home.

We did get one other magazine. It was a gift subscription from my father’s aunt, his mother’s older sister. Her name was Margaret O’Brien, and she lived alone in an apartment at 155th Street and Riverside Drive in Manhattan, an area where the O’Brien family had been living since the nineteenth century. She taught in one of the city’s vocational schools, and family legend has it that the actor John Garfield was one of her students. That must have been in the 1930s. Aunt Margaret was sharp-tongued, legally blind, pious, a daily Mass-goer, and politically conservative. Thanks to her strong political views, we received a copy of National Review every two weeks. As a “white ethnic” Catholic New Yorker, she was a big fan of William F. Buckley Jr., the founder and editor of the magazine. He became popular in New York’s outer boroughs and a national political figure when he ran for mayor of New York in 1965. Asked what he would do if he won, he famously quipped that he “would demand a recount.”

Buckley’s opposition to the Civil Rights Acts of the 1960s and his support for the war in Vietnam made him something of a villain to many young people when I was in high school and college. He was a prominent public figure both for his prolific journalism and the PBS television program Firing Line, where he debated all comers with a waspish wit and a Cheshire cat’s grin. He had a pivotal role in helping create the political and cultural moment that led to the transformational election of Ronald Reagan in 1980.

Buckley died in 2008, and his authorized biography is being written by Sam Tanenhaus, the liberal former editor of the New York Times Book Review and author of a terrific biography of Whittaker Chambers. A former Communist, Chambers became an influential conservative intellectual, an editor at Time, and a mentor to Buckley in the 1950s. Tanenhaus was recently interviewed by Geoffrey Kabaservice, vice president of political studies at the Niskanen Center, a center-right think tank. It is a fascinating conversation, one that paints a nuanced portrait of Buckley as someone who had a genius for friendship, and indeed for living, and a shrewd, pragmatic political sensibility.

Kabaservice and Tanenhaus agree that Buckley, especially in his early career, encouraged some of the worst aspects of the contemporary conservative political movement. Those beliefs and practices undoubtedly played a role in the catastrophic turn taken by the Republican Party with Donald Trump’s ascendency. (Buckley once wrote of Trump that “this is a narcissist we don’t want in politics.”) Yet at the same time, Buckley befriended many of the liberals he vehemently opposed in print, had a unique eye for journalistic talent, and was known for his charm and exceptional generosity. Among the young writers Buckley hired and mentored were Garry Wills, George Will, Joan Didion, John Leonard (future editor of the NYTBR), dance critic Arlene Croce (who also wrote for Commonweal), David Brooks, and Michael Lind. I, too, can vouch for Buckley’s surprising openhandedness. When Commonweal launched an endowment campaign, he sent us $1,000. If memory serves, he wrote that he wanted to support a kindred enterprise. I believe he was alluding to a shared Catholicism. As Tanenhaus notes, he “believed in the Catechism.”

Buckley could “never decide whether he was a conservative in the sense of a traditionalist or a libertarian.”
sharetweet

Tanenhaus observes that Buckley could “never decide whether he was a conservative in the sense of a traditionalist or a libertarian.” As a consequence, there was no philosophical consistency to his thinking. He didn’t read political philosophy and never thought of himself as a philosopher. Despite his Yale pedigree, Buckley was a cultural Southerner. His father, a wildcatting oil man, was from Texas, and his mother, a member of the John Birch Society, was from New Orleans. The Connecticut-based family spent a good deal of time at their second home in South Carolina. This, Tanenhaus suggests, explains but does not excuse his early views on race and National Review’s tolerance for, and promotion of, writers who defended biological racism or even social Darwinism. Incongruously, many of those writers were Jewish.

Buckley’s responsibility for the current fervid climate within conservatism, Tanenhaus says, rests on his determination to place the “war against liberalism” at the center of Republican politics. He excelled at “exposing liberal hypocrisies,” or practicing what is now called “whataboutism.” His political genius was in creating an “alternative narrative” to answer the dominant liberal assumptions of the mainstream media. For decades that animus was at the margin of politics; today it is at the center. Buckley was an ardent patriot, but his magazine was hospitable to an “anti-democratic element encoded in conservatism from the beginning,” one that idiosyncratically casts Abraham Lincoln as an enemy of the Constitution and the father of the modern centralized state.

Tanenhaus gives Buckley credit for National Review’s well-known role in anathematizing the xenophobic and conspiracist John Birch Society. Buckley recognized that for the GOP to become dominant it had to repudiate extremist elements. “Respectability” was important. Russell Kirk, a traditionalist conservative and columnist for National Review, pushed Buckley in that direction. In fact, much to Buckley’s annoyance, Kirk wrote a piece criticizing “John Birch devotees” in the June 7, 1963, issue of Commonweal. Buckley was irritated, Tanenhaus says, because Kirk published his essay on a family dispute within conservatism in too liberal a magazine.

Buckley was also famous for co-writing a notorious book defending Sen. Joseph McCarthy’s red-baiting tactics and conspiracy theories. But Buckley’s allegiance to McCarthy was calculated. According to Tanenhaus, Buckley had only a limited interest in McCarthy himself; his goal was “to create around him an honorable McCarthyism.” At McCarthy’s early death, Buckley wrote a decidedly cool appreciation of the demagogic senator.

Buckley welcomed and encouraged Tanenhaus, despite their political differences. He was “instrumental” in helping him with his biography of Chambers. For his part, Tanenhaus describes Buckley as “larger than life,” someone with a “first-class temperament” who “exuded a kind of generosity of spirit” that cannot be found in today’s political landscape. He was known as the greatest “controversialist” of his time, but Tanenhaus thinks of him as the greatest “listener.” His curiosity about other people and what they think was unbounded. More than thirty years ago, Wilfrid Sheed made the same observation in Commonweal (“William Buckley’s Several Selves,” November 4, 1988). “Such are his gifts,” Sheed wrote of Buckley’s emergence from a wealthy and cosseted Catholic childhood and adolescence, “that he went on to become one of the world’s finest listeners” as the editor of one of the most politically influential magazines of the twentieth century.

Tanenhaus has been working on his Buckley biography for more than twenty years, and the manuscript is now two thousand pages long. That is practically the definition of “larger than life.”