Present in His Grace 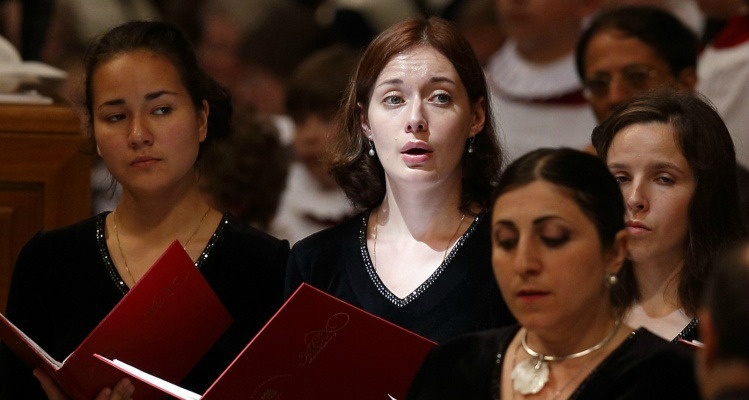 Reggie, the countertenor, was singing to God. He was doing it in German: pucker in his vowels, crisp k’s and bright a’s. Erbarme dich, mein Gott, he sang. Have mercy, my God. Damp air on the “ch.” A barely tapped “tt” on the backs of his bared teeth. The thousand-seat hall was dripping with chandeliers, warm with reverent bodies. Reggie was our entertainment, and our prophet.

Um meiner Zähren willen! For the sake of my tears! Reggie was singing in our college performance of Bach’s St. Matthew Passion, a three-hour masterwork for chorus, soloists, and orchestra. In this aria, he played Jesus, immediately prior to crucifixion. Kneeling among Gethsemane olive groves, Christ pleads for a way out—if it’s God’s will to provide one. It isn’t. Jesus proceeds with the salvific plan.

Reggie sang his Jesus tragic: ferocious in fear, dappled with blood, and empowered by begging. Schaue hier. Look here! He worked in two registers: the dusky hoots of a mature alto, and the gemmy brilliances of a good tenor. Reggie’s countertenor was flawless. He leapt the intervals lithe as a pole-vaulter. I sat on the stage behind him, an anonymous nineteen-year-old chorus member waiting for a cue.

What really got me, a singer myself, was imagining how it felt for Reggie to sing this way—how invigorated his body must be. I watched his stomach swell, imagined the heady whoosh of oxygenation. I knew what it felt like to engage the body so fully in pursuit of expression—that trippy buzz of ringing sound, caught up against your nose like a bad cold; spine stretched long between each vertebrae; legs quaking, and mind curiously blank.

Herz und Auge weint vor dir Bitterlich. Heart and eyes weep before You bitterly. Reggie sang. The audience listened. Out of our engagement came a third person, Jesus resurrected in the dark musty hall. Flickering through Reggie’s music, there suddenly was Christ. His voice was sharp and clear and plaintive.

Later, we’d applaud Reggie. For now it was a time to sit and mourn. The chandeliers hung still. We watched in cultivated horror as Reggie, Jesus, begged his Father for freedom.

Bach and I share a birthday, March 21. In spite of his glower, powder, and historical remove, I've always felt close to the master composer. In high school, I spent summers with the Oregon Bach Festival’s youth choir, cradling copies of his Masses and cantatas. Bach trained my fledgling soprano in breathing and tuning, straightened my slouchy back. In college, I sang more of his work—most notably, the St. Matthew Passion in freshman year.

The language of aesthetics and the language of faith have overlapping vocabularies. A symphony is called transcendent; a sculpture is deemed divine. God is majestic, God is beautiful, and God is great. When the spheres overlap, when Christianity begets beauty in art or literature, and particularly in music, I feel proud. We made that. In thousands of years of Christian bloodlust, ignorance, and hypocrisy, we at least put paint to canvas and stroked out the Sistine Madonna. We’ve got Dostoevsky. Most precious to me, we number Bach among our ranks.

It’s true: scholars have proven the master composer is ours, as much as you can “prove” someone’s faith. Bach’s personal Bible, now known to historians as the Cavlov, is filled with marginalia in his hand—phrases like With devotional music, God is always present in his grace. “No Sunday Christian could have made such acute observations,” writes music critic Alex Ross.

Faith inspires art. Art also enlivens faith—not as a moral teacher, but as an insidious catalyst. The plaintive, counterpoint cries of “Kyrie, eleison” give suffering a tune. The horrifying, choppy “Laß ihn kreuzigen” chorus positions singers as angry mob members. I feel the weight of sin more acutely in these measures than I do after the most brimstone homily. The chorales can be moments of peace, a resting in God that one feels in comfortable harmonies. When dissonance returns, we long for God, and know, in our ears and muscles, what both His presence and absence feel like.

Does religious art lose its potency when we know its maker didn’t believe? Or at least, wasn’t sure?
sharetweet

Freshman year offered an embarrassment of riches—not only Bach, but Gustav Mahler. I sang the twentieth-century composer’s Second Symphony, “Resurrection,” under blazing lights, nearly hidden behind a cluster of timpani. The heat and tinnitus didn’t matter; the music was so good. Flurries of violins and horns, operatic soloists that careened into harmonies. Gooseflesh streaked my arms. All this joy was for Jesus, ascended and united with his Father. The triumphal bell peeling of an Easter vigil, times ten.

But was the joy for Jesus, really? Mahler, a German-Austrian-Bohemian ex-pat, was a Jew by birth. He described himself as an open but unwavering agnostic. His religious compositions illustrate the reality that for generations, artists had to create for the church if they wanted to eat. They didn’t have to believe what they wrote. For most of our canonized artists, who can know if they did or not? For me, as a listener and believer, this raises the question: Does religious art lose its potency when we know its maker didn’t believe? Or at least, wasn’t sure?

As much as I love my Bach, I think the answer is no.

To crave beauty is to be human. God, a craftsman Himself, threaded this longing into us, stitched it somewhere beneath our skins. “Be fruitful and multiply,” He said after days of culling water from sky, sticking scales on fish, and coating the skies with clouds. “Replenish the Earth”—make, fill, revel.

In a world without sin, all would be beautiful. In the world as it is, we only get tastes. Thus, there’s that pinch in the sternum when we see something ravishing and feel a pain akin to nostalgia. As C. S. Lewis argues, we are homesick for a world where things are right. In that world, we are creators made by an artist. We are always inventing. Beauty is the freewheeling norm, without an ache and eventual end. When we long after beauty, long even in its presence, we are longing for a better world, a mysteriously intuited paradise, a glint in deep pools.

When Mahler wrote music, even now when Adele and T. Swift write music, there’s a nod to an impulse shared with Bach, one of mankind’s common denominators: the need to create. That very act is godly, something for Christians to take inspiration from as we seek to make peace and fashion justice. Even if the musical products—“God Made Girls” by the country star RaeLynn versus Bach’s Mass in B minor—may not be equal in the eyes of the Lord or this critic, the artistic impulse is.

The sensibility that’s found in the music of doubters can be particularly helpful. This season, the New York Philharmonic is doing several concerts of Mahler. In February, I saw their rendition of Symphony No. 1. This symphony’s U.S. premiere in 1909 was actually with the N.Y. Philharmonic, and was conducted by its composer. (Mahler was the Phil’s music director for two seasons.) This was the last time he waved a baton over one of his own scores.

This symphony, like the Mahler that I’d encountered before, is thickly textured and deeply dramatic. It’s got no text; like much of Mahler’s work, it is open to interpretation. It features a raunchy peasant dance, as well as a parody of a funeral march. The whole work wanders between keys and modes; many have connected it to the diaspora. Horns squeak; violins slither. Early reception was critical. According to the program notes, Mahler went about like a “sick person or an outcast” when he heard the reviews.

And yet, there’s real anticipation in the First Symphony, particularly in its final movement. Crescendos swell, then collapse back into minor keys. From my stage-left seat, I watched the violists edge forward on their chairs, then relax. We all kept thinking we’d made the end, but Mahler was teasing. A woman seated behind me, following along in a score of her own, flipped her pages more and more urgently. The conductor, Austrian Manfred Honeck, jumped, and pumped, and stabbed at the air. I thought of the “Resurrection,” Mahler’s Second Symphony, which was to follow this one. I wondered what Mahler put his hope in. The movement ended with a flourish, and we all, score-reader included, sprang to our feet.

It’s moving to hear the story of Christ rendered by someone who isn’t entirely assured of Him. A composer who, like Bach, puts real darkness between the bar lines, who goes so far as to twist funeral music. For this man, what would characterize a Christ? What might a resurrection sound like? In his religious music, I can hear Mahler imagining, longing. Perhaps dreaming a Jesus like Reggie’s: sacrificial, divine, human in his song.

Published in the May 5, 2017 issue:
View Contents
Tags
Music
Spirituality