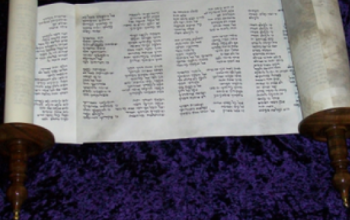 The first thing that struck me in reading André Chouraqui’s essay on the psalms (see Praying with the Psalms Part I) was his passionate and lyrical affirmation of a kind of mystical reality that speaks both to Israel and to the whole of humanity through the psalms. Here is how he describes it:

In this book the world has come to know and recognize itself. Just as it narrates the history of us all, it becomes the book of all, the untiring and penetrating ambassador of the word of God to all peoples here on earth. …

And now for almost two millennia convents and ghettos have found in some mysterious way a common meeting-ground in this vigil of love, as they chant – the one in Latin, the other in Hebrew – those psalms which are the hymns of the shepherds of Israel. What a savor these words have! What a pure diamond they are in the soul of those who have never abandoned the words first taken from the very lips of David! For thus have they passed through all the nights, come through all the wars, moved by the mad hope of one day seeing, when night is at an end and darkness is no more, a child rise up upon the holy hill to sing before the Ark. They had carried this book with them when they went into exile; they experienced each and every one of its verses in their own flesh, in their own blood. This book was something written down; but they lived it even as they read it, and it was no less necessary to live this book than to read it. This book was their own drama, their own hope; it caught them up even as it crucified them: for it held the key to their own mystery.

Chouraqui speaks of the verses of the psalms as arms for the just in a spiritual war against evil, an ongoing conflict set against the backdrop of eternity. Military metaphors are not everybody’s cup of tea, obviously, but I think the element of conflict to which he points is really there. The psalms describe sharp contrasts, and the stakes are eternal. The psalms call us to decision.

From the very start we find ourselves confronted with a world that excludes indifference. There are two ways, and only two ways. Not three; not four or as many as you like. We have had it made clear to us: the world is broken into two parts. We have to make our choice; and this choice is both the exigency and the risk imposed by this break or cleavage into two. …

The two principles in this duel waged at the frontiers of life and death, and who confront each other from beginning to end, are the Innocent and the Rebel.

Both say No. The one refuses the way of light; the other, the way of darkness. The one says No to the wickedness of the world; the other to the eternity of God. …

It is not long before we meet the Prince of Darkness on the path of wickedness. The Psalter provides him with a frightful identity card that includes no less than a hundred and twelve names, surnames, titles, and qualities. He is essentially the Racha’, the one who is unable to face God’s judgment, the Reprobate. He is not a single or particular individual, but the very entity of evil under all its various visages.

After reading Chouraqui’s lengthy enumeration of those “visages of evil” which appear in the psalms, the wisdom of Parsch’s recommendation that we look for the “point of comparison” returned to me. We encounter each of these “faces” somewhere; where have we seen them before? We have offered to us in the psalms many windows onto the mystery of good and evil, but it is up to the reader/hearer to discover the point of comparison and bring it to prayer. This task is not always directed outward; it can be introspective. As Chouraqui writes, “every man carries within himself the countenance of the Rebel.”

Chouraqui’s descriptive list of the psalter’s names for the Innocent is likewise powerful. At times they are also quite unexpected:

… [T]here are also nearly a hundred names in the Psalter to designate the hero of light: the oppressed, the afflicted, the despoiled, the tramp; the humble, the poor man, the broken hearted; the faithful, the wise; the one who trembles, the upright; the stranger, the alien to the world, the beggar; God’s devotee; the one who keeps watch before God’s countenance, who searches for God’s blessing, for his light; the innocent, the Lord’s ally, the heir to eternity; the clear-sighted eye, the pure heart, the honest hand; herald of the word, performer of just deeds, the tree of life rooted on the river-bank of mighty waters; the strong and wise, heroic and detached, fecund and pure; clear-sighted and without self-will; dead certain of victory yet all atremble for it; lover of life, yet suffering the passion of death; exiled in gaping wounded flesh, dying from the violence of his suffering or of his ascetic combat; captive of that hope which pledges him to acts of redemption, and therefore enemy of the abyss in which non-being sparkles.

The ones that startled me, I have to admit, were the tramp and the beggar. Can it be that the psalms call us to see the one who has nothing – and who is despised for having nothing – as a “hero of light”? Could these prayers, which Jesus also prayed, have been instrumental in forming his teaching concerning the Beatitudes?

Chouraqui points out that antipathy between the Rebel and the Innocent which runs through the psalms is also played out in the psalter’s depiction of the tension and contrasts between Israel and the Nations. There is a communal or collective dimension to the psalter that parallels the individual’s eye-view.

Finally, he describes how the psalms, by witnessing and praising the supremacy of God over all, show the dualities and tensions on the human plane to be contingent.

For [God], the duality of darkness and light, which divides creation to the very point from which rebellion arises, simply does not exist. Everywhere, he is one and the same, the master. Everything becomes clear in his light.
The Lord reigns; he is robed in majesty;
the Lord is robed, he is girded with strength.
Yea, the world is established; it shall never be moved.
-- Psalm 93:1

What are we doing when we pray these songs, this ancient poetry? When we pray with the psalms we are stepping into the world of the Bible and allowing the words of the psalmist to shape our prayer. At the same time, we bring to this exercise our own hopes and joys, fears and longings or else it ceases to be our prayer.