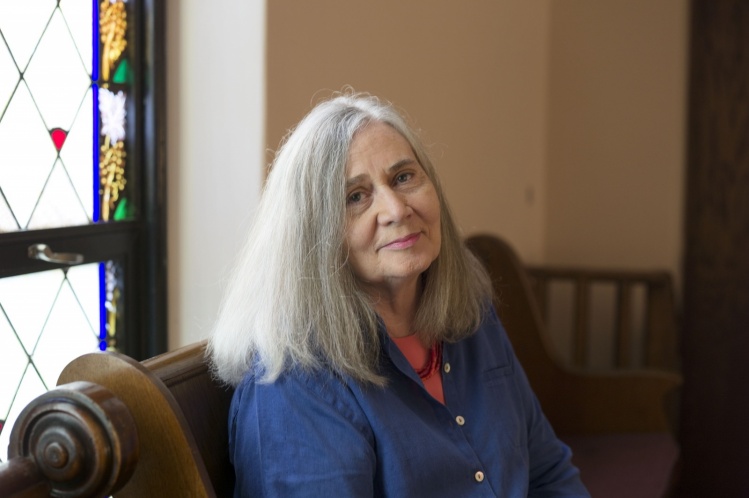 Marilynne Robinson opens Jack, the fourth novel of her Gilead series, as a playwright might: dramatic dialogue commences without explanation or context. Jack Boughton, a middle-aged man many readers will know from his appearances in Robinson’s Gilead (2004) and Home (2008), walks a few steps behind a younger woman, escorting her home (in his fashion) from their disastrous dinner date. Gradually the situation becomes clearer: he has disappeared from the restaurant and abandoned her to the check, only to catch up with her now. The woman, Della Hutchins, is furious. She’s a teacher, Jack reminds her; he, a self-described “bum,” is no good for her. As he exits the scene, he promises to leave her alone, but immediately (in the novel) and months later (in the plot) we find them together in another dramatic scene rich with dialogue, this one a seventy-page tour de force set among the tombstones and obelisks of the Bellefontaine Cemetery in St. Louis.

The setting then, is no longer Gilead, Iowa, where most of the action of Robinson’s previous three Gilead novels takes place. (While it is a triple dose of narrative satisfaction to read Jack alongside the others, each stands on its own.) The cemetery scene opens deep into the night. In this most resonant of settings, a reader begins to understand the full extent of Jack and Della’s conflict and their growing attraction. As they spend a long night walking together through the cemetery, their dialogue reveals a great deal, from his philosophical musings (“I suppose entropy should have a nimbus”) to her plain speech (“I have never heard of a white man who got so little good out of being a white man”). In mid-twentieth-century America, this white man and this “colored” woman are in danger simply being in each other’s company, and she is in far more danger than he. That reality becomes the underpinning of their conversations. But as much as Jack and Della reveal themselves in dialogue, it is Jack’s interior monologue—his lively, anguished perceptions—that guides us through the scene and the rest of the novel.

Each of the Gilead novels has a distinctive style and perspective. Jack’s is, for long stretches, the most charming and the most vexing of the four points of view Robinson has employed. His tone is wry and tragic, an astringent combination. He spends a good deal of time contemplating what Camus calls the “one serious philosophical problem”: After his stretches as a petty thief, absconding father, and prison inmate, shouldn’t he just commit suicide? In the cemetery, both Jack and Della allude to Hamlet; we come to understand that, long before he met her, this alcoholic pondered “to be or not to be.” Jack’s deepening love for, and obligations to, Della, are set against the harsh realities of racial bias and unjust laws. Both are the children of Protestant ministers, and while many of their conversations concern the most basic questions of belief, the novel is just as concerned with racial justice and where it coincides with faith. In her intertwined explorations of appalling history and religious, political, and philosophical questions, Robinson resembles no other contemporary American novelist so much as Toni Morrison.

In her intertwined explorations of appalling history and religious, political, and philosophical questions, Robinson resembles no other contemporary American novelist so much as Toni Morrison.
sharetweet

In her literary voice, however, Robinson is, as Morrison is—as all great writers are—quirky, sui generis. Like Della, Robinson is plainspoken, uncommonly clear. She is also, as Jack is, multifaceted and challenging: she asks her readers to contemplate the mysteries of our existence on earth with a vocabulary attuned to precision and a full store of allusions from the classical to the modernist. Both Jack and Della are fluent in Scripture: “Day to day pours forth speech / and night to night delivers knowledge.” Della is an English teacher who shares Jack’s love of poetry; they both know their Shakespeare and their Milton. She introduces him to the great Black poet Paul Laurence Dunbar, while Jack recommends William Carlos Williams’s Paterson, a book-length poem that, like Robinson’s novels, employs geography as moral landscape, probes history’s forgotten lives, and revels in plain American speech.

The earlier novels Gilead and Home are saturated with our country’s bloody history of slavery and segregation; it is the white characters in those novels who perceive (or fail to perceive) racial injustice. (The third novel of the Gilead series, Lila, explores the impact of Depression-era poverty on white characters.) In Home, we catch the briefest glimpse of Della, but in Jack, set ten years earlier, her characterization is lengthy and crucial: though she is seen entirely through Jack’s eyes, she is the fulcrum on which this novel pivots. In their nuanced essay, “On Whiteness and the Racial Imaginary,” Claudia Rankine and Beth Loffreda argue that “race enters writing, the making of art, as a structure of feeling, as something that structures feelings, that lays down tracks of affection and repulsion, rage and hurt, desire and ache.” Robinson acknowledges this “structure of feeling” throughout the novel, and recognizes the need to fully imagine and embody Della as her own woman.

Jack is attracted to Della’s loveliness, to the way she wears her hair and her hats, to the shades of her skin in different light, but he is not color blind. He is also attracted to her rage. “I actually am full of rage. Wrath,” she tells him in the cemetery. When Jack says, early on, “You’re very sure of yourself. At ease in your skin,” she responds, “You actually said that.” Both Jack and the reader feel and admire her righteous heat. Her father is a bishop in Memphis, where she was raised, a “race man” who makes his opposition to Jack’s romance with his daughter perfectly clear: “You can never be welcome here.” Della’s family is exquisitely formal and polite, but also glows with warmth for each other. In their presence a reader comes to understand something about why Della guards her privacy so rigorously, why she welcomes Jack into her own home even when he’s drunk.

Della does become a vital and appealing character, physically and emotionally, but her characterization is mostly, rather than entirely, convincing. She never uses any hints of Black vernacular around other Black characters; this is clearly a considered choice, meant to underscore her formality, but it is not, it seems to me, entirely authentic. Though the term “code switch” wasn’t yet in use, learned African Americans had used two inflections of English for generations before Della. It also seems odd that aside from Dunbar, Della’s points of reference are all white poets. Because her knowledge of poetry is so wide ranging, her upbringing so focused on Black pride, surely she would know other poets of the Harlem Renaissance, including, for example, the great Langston Hughes, whose plainness of speech matches her own.

But despite these reservations, when Della is on the scene I believe in her anger and wit and generosity. I believe even in the one aspect of her character that is most difficult to believe: that she will risk her very life to be with an utter failure of a white man. Even Jack’s references to himself as the “Prince of Darkness” don’t scare off the intrepid Della. Her suitor, with his “battered raffishness,” charms other women, too. When he takes a job selling shoes, the proprietor calls him “Slick”; he always has a necktie handy. His librarian and his ballroom dancing students bring him treats. The last job he holds in this narrative is as a bookstore clerk—he has disarmed the owner’s daughter—but mainly his occupation is, as he says, bum. He hangs on to a room in a boarding house through the generosity of his brother Teddy, whose appearances throughout the Gilead novels have shown him to be a model of decency despite a lifetime of his brother’s compulsive petty thievery, a temptation that baffles Jack but one he succumbs to again and again. And again and again he convinces himself that a drink after a long stretch of sobriety might ease his terrible anxiety. A reader may be ready for that drink, too.

Robinson holds ideas and experience in a fine balance; she offers the possibility of love and forgiveness alongside the reality of bitterness and violence.
sharetweet

Anyone who has read the earlier novels already knows the sin Jack regards as his worst: as a college student, he impregnated a younger girl, leaving his parents and sister to offer help. Now that child—who did not survive—and her mother haunt him. He’s not worthy of Della, he repeatedly tells himself. He’s right, and he also understands that a marriage undertaken in defiance of anti-miscegenation laws leaves her open to arrest and imprisonment, if not physical attack. Yet even after Jack’s failings have been heaped out in a large pile before us, a reader witnesses his “apophatic loneliness” and his efforts to behave honorably. His visits to a Black Baptist church and his hymn playing are as compulsive as his thievery. Like his long-suffering father, readers may forgive him everything.

Conceptually, a reader knows that if Jack and Della’s love can survive Jim Crow, there’s hope for our country. But artistically—that is, mysteriously, on many simultaneous levels—the reader falls for their love because Robinson establishes their sexual attraction so subtly and yet so completely. Their first kiss, their first dance: these old-fashioned ways of signifying flesh drawn to flesh are both completely apt for the era and full of surprising, sublime narrative tension, a tension that seeks to celebrate rather than negate or understate their difference. When Della prepares Jack for her father’s reaction—“He doesn’t believe in marriage between the races”—she thinks to add, “I probably don’t either.” The indignities this couple will suffer after they pledge themselves to one another are excruciating and necessary reminders of a time when the racial hatred still flourishing in our country manifested itself even more audaciously.

One of the satisfactions of the Gilead series is this deep immersion into our complicated national history. Another is Robinson’s boundless affection for her characters and for the natural world that surrounds them, even in the urban settings of Jack. Robinson holds ideas and experience in a fine balance; she offers the possibility of love and forgiveness alongside the reality of bitterness and violence. But the ultimate satisfaction is the precision, wit, and intelligence of her glorious rhythmic prose. In Home, Jack’s sister Glory observes that “there was a kind of grace to anything Jack did with his whole attention.” In Jack, a reader senses Robinson’s whole attention, and responds in kind. Like Jack, like Della, this novel may be imperfect—but it is beautiful.