For Trump, It Was All of the Above
By Marcia Pally
Donald Trump
Election 2016
Domestic Affairs
Barack Obama
Web Exclusive 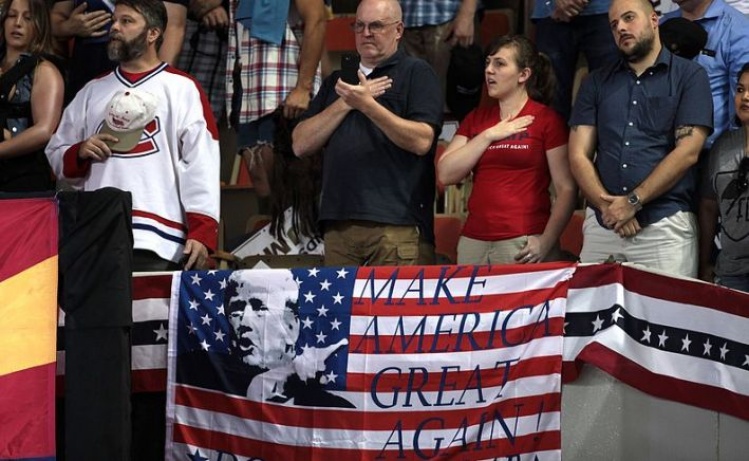 They wanted “change,” he promised change, and change most of all from the lying, corrupt, incompetent government of the last eight years. He differed from all candidates before, and in an exercise of popular will against expectations and the Washington establishment, they voted Barack Obama to the U.S. presidency. Or Donald Trump.

The elections differ to be sure; all elections do. But they are rooted in a common American tradition: when there’s something awry—and when is there not?—government is the problem, as Ronald Reagan said when he won the presidency. Boot the bums out, and make room for We, the People to make America great again.

Trump tapped into all three to answer troubles we all agree we have: the U.S. has less upward mobility than Canada and Europe. It is the most unequal of all Western nations: our “Gini” (inequality) index is 85.1, in line with Russia’s 93.1, Chile’s 81.4, India’s 81.3, Indonesia’s 82.8, and Kazakhstan’s 86.7. The working class feels squeezed out of the globalized, technology-driven economy; the middle class fears they or their children will be. Both feel continuing loss of control and powerlessness in a society “rigged” against them—a Trump mantra. The culture whose rules they knew and played by—hard working, disciplined, church-going—they fear is being undermined by those “suspect” groups. Going if not gone is the tough, self-reliant responsibility of American history, myth, and pride. This helps explain the appeal of Trump’s racist and misogynist remarks. They are a slap in the face of those condescending politically correct, educated elites rigging the economy and they kick the government’s PC, anti-discrimination regulations in the pants.

We come by all this honestly, born in a revolution against government. But long before, the earliest settlers, fleeing the centralization struggles between Charles I and Parliament, were already wary of government elites in the “New Jerusalem.” London’s men were the bums to be booted out. As many settlers were religious dissenters, they were doubly suspicious of government for its centralization and persecution. Protestantism, with its mandate to read the Bible for oneself and find one’s own path to God, encouraged the view that the responsible agent is the individual (guided by her local church). Reformed Protestantism, come to America through the Puritan and other Calvinist traditions, held that sovereignty starts with local covenanted communities, the foedus, which then form networks to constitute the nation. Add to that the rough settlement of the frontier, which further encouraged government-wary self-reliance as there was little government around to rely on. Self-responsibility and local community ensured survival and the future. National government took a larger role as the country grew, yet the value of individual and local effort combined with suspicion of central authorities were rooted in America’s political DNA.

This vibrant, anti-authoritarian suspicion of government is the bedrock of democracy and our robust civil society. But it also means we’re unsure of what to do with our own government.

Trump gives voice to “boot the bums out,” and because it’s rooted in our political DNA—because it’s our default solution—it “clicked” and brought in the votes. His most ringing charge against Clinton? She’s a crooked, corrupt, thirty-year insider. “Two-thirds of Trump supporters,” the Public Religion Research Institute found, wanted “a leader who breaks the rules.” A Boston Tea Party redux. Other candidates had similar positions but lacked Trump’s feathers and war-paint yelp.

One definition of “tragic” is supporting policies that worsen problems. Closing borders will not likely boost national security given the extensive vetting process for refugees. But it does do ISIS’s PR for them, blaring that America hates all Muslims, who should thus retaliate. Deporting immigrants will not solve economic ills since immigrants create firms and jobs, annually add $35 billion to the economy, and by the third generation, pay $223 billion in yearly taxes.

Yet this pales before Trump’s jeremiad of hellfire for Washington. The more unflinchingly he preaches, the more satisfying it feels. As Trump University taught: “You don’t sell products, benefits or solutions—you sell feelings.”

What of Clinton, Sanders, and Obama? They’re preaching America’s alternate political creed: still “change,” but government has a hand in the changing, in giving the little guy a leg up. Indeed, Obama campaigned on “change” in order to give the government a larger hand. In this year’s campaign, we have, The New York Times wrote, “Mr. Trump seizing on economic dislocation in mixing populist anti-trade positions with traditionally Republican tax cutting, and Mrs. Clinton seeing a strong government hand in creating jobs and driving up wages.”

In 1787, most Americans opposed the constitution because it would give Washington too much control. The authors of the Federalist Papers tried to persuade them to give D.C. a try. We’re still not entirely convinced.