Georgetown's Conference Was a Good Start
By Jacob Lupfer 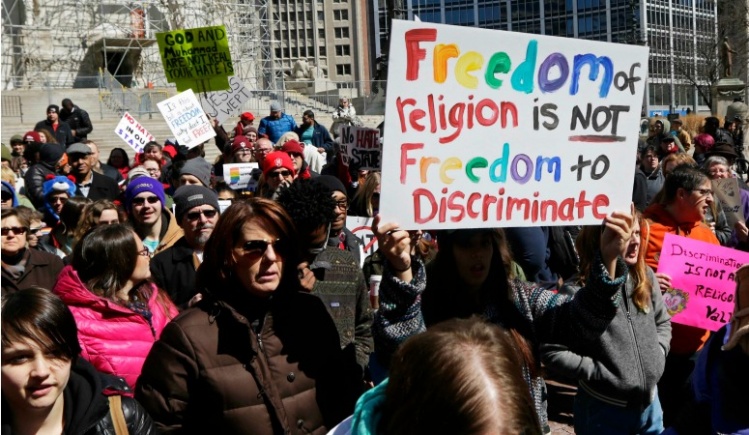 The debate over religious liberty in the United States is broken. Until recently a bedrock commitment shared across both parties, the consensus about our “first freedom” has quickly unraveled. Especially since the Supreme Court decided in 2015 to legalize same-sex marriages nationwide, religious liberty is the latest culture-war battleground. Too many on both sides have hardened and radicalized their positions.

Over the course of this unraveling, Georgetown University’s Berkley Center for Religion, Peace & World Affairs has undertaken a rigorous research program on the subject. Its Religious Freedom Project is the only university-based center devoted to scholarship on religious freedom. Dozens of scholars from a diverse array of institutions and faith traditions have contributed to these efforts, a mix of discussion, advocacy, and research into the state of religious freedom in the United States and around the world.

The Religious Freedom Project has led to the creation of a new institute and has strengthened countless ecumenical, interfaith, and academic partnerships. It recently convened a daylong symposium to discuss its research about religious freedom and the common good, which I attended with some skepticism: whenever I mention religious freedom issues to anyone in Washington, they immediately want to debate about Kim Davis or wedding vendors. Partisans often seem ignorant of the philosophical foundations and social meaning of religious freedom domestically and globally.

Georgetown regularly hosts difficult conversations about complex, contested issues of morals and justice, even when the political discourse about them is fruitless and broken. Just this year, the university had a sensitive, respectful dialogue about abortion rights after Planned Parenthood CEO Cecile Richards spoke on campus in April. Georgetown also recently lamented and repented of its own slaveholding past.

In discussing the relationship between religious freedom and human flourishing, scholars humbly and honestly presented their findings—a welcome reprieve from the political posturing that has dominated much of the public debate on these matters. Researchers suggested a link between religious freedom and desirable social outcomes, all the while conceding that the causal effect is difficult to quantify or precisely estimate. The scholar-advocate Rebecca Shah, for example, found that women in India who are religious converts are likelier to report sexual abuse because their faith provides a heightened feeling of worth and expectation of dignity. Shah’s scholarship also points to the urgency of studying the content of religious belief, not merely affiliation, a finding that should sharpen research agendas across the social sciences. Too often, pollsters or scholars identify respondents as Evangelical or Catholic in research studies without knowing anything about their religious beliefs or practices. But if religion is a potent social force, then we must know something about faith beyond a nominal affiliation.

The impact of religious freedom on economic and political life is also positive, though complicated. Naturally, religious freedom accompanies and advances norms of tolerance and pluralism that stimulate trade and markets. But Ilan Alon of the University of Agder in Norway has found that while religious freedom is essential to democracies, it can be used to bolster authoritarian regimes. Religious freedom can have a negative impact in states transitioning from authoritarianism to democracy. In “immature” environments, religious groups often vie for political control. We know that autocrats can collude with religious organizations to legitimize their rule and further oppress the people. In  nascent democratic states, emerging civil institutions and social contracts depend on more than religious tolerance.

Intent on connecting religious freedom concerns to domestic and international affairs, the Georgetown conference featured a keynote address by U.S. Senator Ben Sasse (R-Neb). Almost all politicians try to say the right things about religion to the right audiences. But Sasse, perhaps more than all the rest, knows what he is talking about. A Yale-trained historian of American religion and former college president, Nebraska’s junior senator often speaks with expert insight and authority on the role of religion in politics. But his partisan blinders handicap his analysis.

Sasse opened with a bold claim: “The U.S. government is not nearly the clarion voice on the issue of international religious freedom that it has been in moments past and that we need to become again in the future.” This is demonstrably false. The U.S. Commission on International Religious Freedom, which Congress created under President Bill Clinton in 1998, has dramatically increased the visibility of these issues in various areas of international relations and American foreign policy. The bipartisan commission—currently chaired by Thomas Reese, SJ, and utilizing a small but expert staff—offers outsized influence and guidance on these issues. Multiple visible and influential offices in the government, including a special representative for religion and global affairs advising Secretary of State John Kerry, highlight the United States’ global leadership on international religious freedom. One wonders if Sen. Sasse would have such a dour view of the same facts if he were speaking in the eighth year of a Republican administration.

The young senator was absolutely correct, however, in his contention that today’s polarized political climate creates a toxic atmosphere of both suspicion and apathy toward religious freedom. “The term ‘religious liberty’ is being perceived as if it is a placeholder for some sort of bigotry,” Sasse noted. “We shouldn’t be talking right versus left when we’re talking about religious liberty. This is the first freedom of the American experiment, the first freedom listed in the Bill of Rights.”

In my view, Sasse’s considered comments would profit from some of the nuance the Georgetown panelists brought to the discussion. But his diagnosis of the present political stalemate is essentially correct. Conservatives, who have been more robust advocates for religious freedom in recent years, tend to overplay their hand. They double down on cases where their arguments are weakest. I sometimes wonder whether their well-funded legal advocacy groups have ever met a plaintiff they didn’t like. Conservatives could advance the debate significantly just by plainly stating what limits, if any, exist on religious freedom claims. Progressives eager to defend LGBT rights and political victories allege that traditionalists use “religious liberty” as an excuse to discriminate carte blanche. Even the most thoughtful social conservatives do little to quell this concern.

Some conservatives cannot resist grandstanding, as when Sen. Ted Cruz spoke at a 2014 gala in support of Christians in the Middle East, only to reiterate the U.S. Right’s unconditional support for Israel. Cruz walked off the stage after he realized his Christian audience did not want to be lectured on Israel politics. The plight of Mideast Christians is a central concern for many conservative Christians and others who want religious freedom issues to be more prominent in American foreign policy. Yet a large segment of U.S. conservatives elevates Israel orthodoxy over meaningful advocacy for persecuted religious minorities abroad. At home, GOP presidential aspirants and the conservative legal-advocacy apparatus fell over themselves to champion Kim Davis. Mike Huckabee swooped into Kentucky to accompany Davis out of jail and headline a rally in her defense. Davis’ lawyer, Mat Staver, arranged a meeting with Pope Francis during his apostolic journey to the United States. The Vatican later had to clarify that the meeting was not an endorsement of her defiance.

For their part, the hard truth progressives must face is that they are often wrong on religious freedom issues. A few Democrats and certain precincts of American liberalism have bucked the trend, but most progressives have adopted the view that religious liberty claims amount to little more than a last-ditch protest against the just and inevitable universalization of the elite consensus on LGBT rights. Arguing before the Supreme Court last year, Solicitor General Donald Verrilli hinted that religious institutions might be in danger of losing their tax-exempt status for opposing same-sex marriage: “It’s going to be an issue.” Liberals are mostly unfazed by the notion that conservative religious colleges may lose their accreditation or be forced to close for dissenting on the new legal definition of marriage.

To the greatest extent possible, people and institutions should be free to live and operate in accordance with their religious beliefs about marriage, abortion, and contraception. Progressives suppose they are on the right side of history, but I doubt supporting the government in court against bakers or Catholic hospitals or nuns is going to look wise in hindsight.

Georgetown’s Religious Freedom Project points to a way forward. In addition to noting the benefits and plumbing the historical and philosophical foundations of this core human right, scholars are engaging the increasingly emboldened critics of religious freedom. Questions about religious freedom go beyond clashes over civil rights and liberties at home; they also entail difficult questions of authoritarianism, majoritarianism, and repression abroad. A more honest, less rigidly ideological dialogue about religious freedom won’t ignore that.

Future debate and advocacy on religious freedom will demand rigorous engagement with people of diverse faiths and ideological commitments. But we can hope cultivating the American ideal of free exercise and a global commitment to freedom from coercion in matters of conscience will preserve and protect religious freedom beyond the culture wars for all the world’s people.

A frequent commentator on faith in public life, Jacob Lupfer is a contributing editor at Religion News Service and a PhD candidate in political science at Georgetown University.