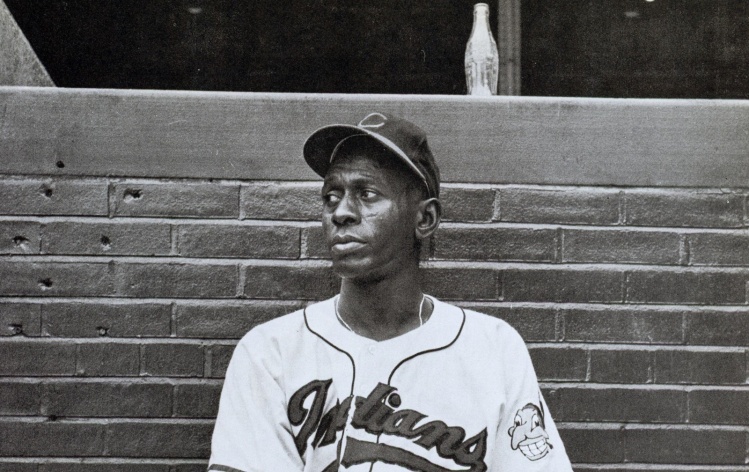 I confess I was relieved to see “Satchel Paige” and not “Eucharist” trending on Twitter following President Biden’s visit with Pope Francis. On a video feed released by the Vatican, Biden regales Francis with a story about the great pitcher, for whom Biden seems to have a special fondness (Paige’s 1953 Topps baseball card is among the framed photos on the table behind the “Resolute desk” in the Oval Office). In April, Tom Shieber, senior curator at the National Baseball Hall of Fame and a leading researcher with the Society for American Baseball Research (SABR) tweeted, “Biden likes to tell a story about baseball pitching great Satchel Paige’s attitude towards age, ending with the quote, ‘How old would you be if you didn’t know how old you were?’” This was the same story he shared with the 2020 World Series–winning Los Angeles Dodgers during their July 2021 visit to the White House, and three months later with his friend the pope. Biden’s affinity for Paige was also noted by Bob Kendrick, president of the Negro Leagues Baseball Museum. Interviewed on Black News Channel after Biden’s Vatican visit, Kendrick was overjoyed that Biden had recognized Paige in this global venue and imparted this particular “Satchelism,” but he was even more impressed that “the pope got it!”

Lost in threads of contested interpretations on social media was the fact that Biden was speaking to Pope Francis in one of their common languages: sport. This was no jumbled word salad, as some Biden-baiters charged. Rather, the story the president told tapped into many of Francis’s favorite themes, from the importance of the dreams of elders to the role of sport as a catalyst for social change.

Watch Francis as he leans in and listens intently to Biden’s recounting. His posture reflects his counsel in the 2019 post-synodal exhortation, Christus vivit, that “these stories take time to tell, and we should be prepared to listen patiently and let them sink in, even though they are much longer than what we are used to in social media.” For Francis, the dreams and stories of elders are necessary for building a better future. He grounds this belief in his oft-cited mantra from the prophet Joel (2:28), an affirmation that with the outpouring of the spirit our elders shall dream dreams and our young shall see visions. So he calls elders, himself included, to be “memory keepers” because “dreams are intertwined with memory.” Even painful memories serve envisioning because they “show that it is possible to emerge renewed from an experience of hardship.” In his preface to the book Sharing the Wisdom of Time, Francis affirms the value of intergenerational interdependence: “Without the witness of their elders’ lives, the plans of young people will have neither roots nor wisdom.”

To tell a story about Paige is to tell of all those made old before their time because of acts of exclusion.
sharetweet

Satchel Paige was old in baseball years, and as a pitcher his arm should really have been past its prime. In his 1962 autobiography, Maybe I’ll Pitch Forever, he noted that when he signed with the Cleveland Indians, after an accomplished career in the Negro Leagues, some said he was “forty-two going on forty-nine.” In 1948, he became the first African American to pitch a Major League Baseball game, the oldest “rookie” and a key contributor to Cleveland winning their last World Series.

The toll of racism and exclusion from pursuing his dreams as a gifted athlete undoubtedly aged Paige beyond his years. The poignancy behind the story that Biden passed on comes through in the autobiography. Paige writes,

For a guy who’d been around as long as me, making the majors was a big thing. It meant I’d done what death had kept Josh Gibson from doing and what age’d kept a bunch of others from doing…. The guy who couldn’t get into the major leagues for twenty-two years of Jim Crow was in the majors.

In part it was age that prevented established Negro Leagues stars like the catcher Josh Gibson and Satchel Paige from being the first players signed to Major League contracts, a distinction that went to the younger Jackie Robinson. (Gibson died at the age of thirty-five, four months before Robinson made his debut with the Brooklyn Dodgers in April 1947.) But Major League Baseball’s gradualist policy of limiting the simultaneous signings of African American and Afro-Latino pioneers just to assuage white sensibilities also played a role.

To tell a story about Paige is to tell of all those made old before their time because of acts of exclusion. It is an indictment, in this case, of the structural and systemic racism that denied Paige and too many others their dreams. To raise up the witness of Satchel Paige is to invoke memories of resistance, resilience, and wisdom born of struggle, an act of memory-keeping necessary to fuel visions for building a better day.

While the pope’s dialect reveals a fluency in soccer/fútbol, there’s no mistaking his understanding of sports as a vernacular to create spaces of encounter, narrate the struggles for inclusion, foster solidarity, and inspire practices for dialogue and living together justly. A story passed between elders that transcended regional dialects and ignited, on social media, a further sharing of the legacy of Satchel Paige, transmitted a memory of an elder who continues to motivate the ongoing work of racial justice. Following the encounter between pope and president, the Negro Leagues Baseball Museum tweeted, “You know who’s trending today? @Pontifex, @nlbmprez, and @POTUS. All about one guy named Satchel Paige. Pope Francis, you have a standing invitation to the Negro Leagues Baseball Museum. What a day for America’s pastime.” What a day indeed! As the World Series played out between Houston and Atlanta, Pope Francis was invited back to the United States to visit Kansas City, Missouri, and engage in yet another conversation in his beloved language of sport.